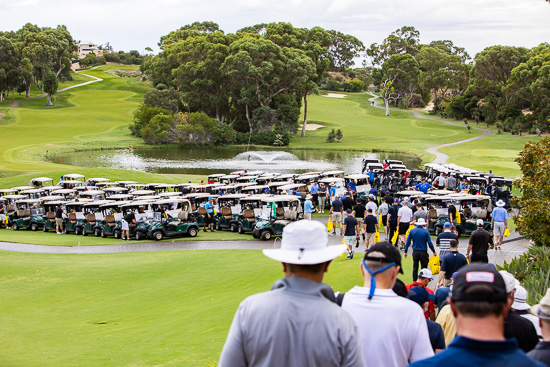 It was a sultry day for the Presidents Cup golf tournament at Joondalup Resort. In 2022 style, everyone had to do a rapid antigen test for COVID to be allowed to play.

It was a busy if inelegant start to the morning with cotton buds stuck up 219 pairs of nostrils. There weren’t any positives so then it was all about golf.

The Mining Club’s annual Ambrose event has become a big drawcard for golfers of every colour and hue, and there was a notable competitive spirit to the day.

A convoy of 55 golf carts set off to the three COVID friendly courses as it started to heat up to the predicted 40 degrees.

Most tee’d off knowing their ball and club speeds via the Trackman at the first hole, and many definitely wished they didn’t.

The sponsors marquees dotted around the course were welcome respite as the mercury rose. Some shade, some merch and some cold drinks before moving on to the next hole.

By the time a paltry few raindrops fell even the kangaroos were laying down to escape the heat. Then the drinks buggy with Anne-Maree and Lucy at the helm would putter into view just in time.

There were three oyster shuckers who were working hard for their money. Golf, maybe a cold beer, a dozen oysters and some serious networking time. What more could you want really.

It was great to see former club president Neil Watson driving the course catching up with players, friends current club committee members. Neil has promised to don the “Plus Fours” baggy trousers and play in next year’s event and we look forward to seeing that.

There were brickbats and bouquets for the prize winners, starting with the NAGA award. It’s for the team who, despite their best efforts, didn’t put in a stellar performance.

Nearest the pin on Lake 3 was Harley Hollier with a hole in one.

The longest drive was on Quarry 4 by Colin Mackay-Coghill.

Nearest the pin on Quarry 3 was Michael Key

Nearest the pin on Dune 4 was Steve Hollier

There were three groups with the same gross stroke and net scores so the judges did a countback.

In third place with a score of Gross 60/Net 46.50 was group 7 on the Lake Dune course-Dune 4A; Stuart Matthews, Alex Munt, Graeme Ovens and Gary Snow.

In second place with a score of Gross 60/Net 46.5 was Group 13 on the Dune Quarry Course-Dune 7; Mark Davis, Chris Horrocks, Brad Turner and Matthew Watson.

The winner with a score of Gross 60/Net 46.5  was on the Dune Quarry course -Dune 6A was group 11; Phillip Johnson, Colin Mackay-Coghill, Graham Mackay-Cogghill and Matthew Thomas.

The profits from the day’s event go directly to the WA mining club Scholarship Program to support emerging leaders in the field.

Yet another successful Presidents Cup Golf Tournament. So successful, there was even talk by the WA Mining club of another event this year.