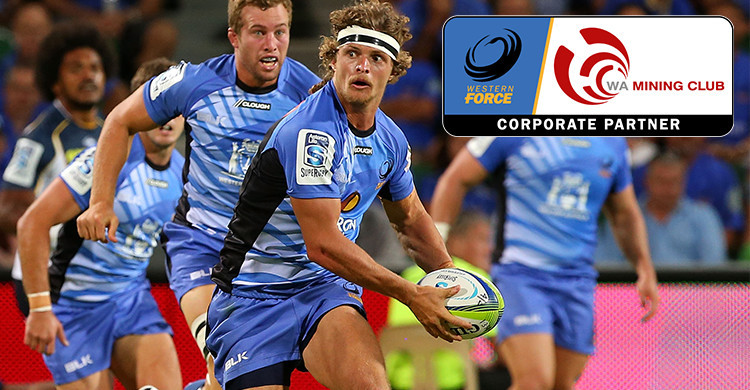 The Force, who have entered into another year as an official partner of the WA Mining Club, will host its first home match against New Zealand’s Hurricanes (Wellington) on Friday, 27 February as one of eight blockbuster matches at the ‘Force Field’ (nib Stadium) in 2015!

The Western Force features a range of high-quality corporate hospitality packages to suit all corporate clients.

WA Mining Club member, TOLL, who have renewed as a corporate client of the Force’s for a fourth successful season, are excited about the season ahead.

“We have been using Western Force corporate hospitality over the past few years and have found it extremely valuable for rewarding our existing clients as well as engaging potential business partners,” they said. “Entertaining these clients at Force matches has provided a strong return on investment for us, with the added benefit of supporting a proud Western Australian club in an international competition.”

The Western Force will be looking to mark its 10th anniversary year with a big season that will also feature home matches against the reigning champions, the NSW Waratahs; last year’s semi-finalists, the ACT Brumbies and Highlanders (Otago); South Africa’s Cheetahs (Free State) and Stormers (Western Province); and Australia’s Melbourne Rebels and Queensland Reds.

The Western Force is offering Mining Club members the opportunity to attend a home match at the ‘Force Field’ (nib Stadium) this season!

You and three guests can enjoy full food and beverage service in a four-seat Open Box in the Western Grandstand for just $1546 (incl. GST).

Enjoy the best seats in the house watching the premier provincial rugby competition in the world.

To take up this offer please contact Chris Schmid (chris.schmid@rugbywa.com.au) and make sure you tell him you are a WA Mining Club Member!