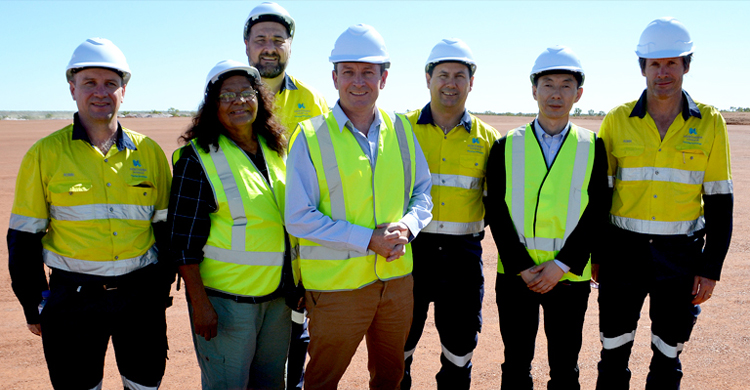 The first stage, a three-year pilot plant project, will be used to assess the economic feasibility of a full-scale project and forms part of a broader ongoing feasibility underpinning the Browns Range Project.

Dysprosium is a key component in the manufacture of permanent magnets, used extensively in electric motors, particularly those in high-temperature applications like wind turbines and electric vehicles. Browns Range will be the only producer of dysprosium outside of China, making it attractive for offtake partners.

The shift towards electric vehicles has not happened overnight. It is over 20 years since Toyota released the first Prius; however, it has taken a while for the mainstream carmakers to get on board. Following the influential performance by Tesla in this sector, nearly every automaker has shifted its focus towards an electric future. Earlier this year, UBS released a research report indicating that cost parity between electric and non-electric cars would occur in late 2018, at which point sales are expected to take off.

With price parity and Government intervention, the Company is confident that the level of demand for its heavy rare earths products will increase over the coming years. With an increase in demand and limited new supply sources coming online, Northern Minerals is hopeful that this will continue to translate into higher commodity prices.

The Pilot Plant Project involves the mining and processing of 180,000 tonnes of xenotime ore over three years to produce 1,719,000 kilograms of mixed rare earth carbonate containing 148,200 kilograms of dysprosium as well as terbium, lutetium, neodymium and praseodymium. All the mixed rare earth carbonate will be purchased by Lianyungang Zeyu New Materials Sales Co Ltd (JFMAG), a 51 per cent owned subsidiary of Guangdong Rare Earths Group.

The three-year pilot plant processing plant is being constructed with a capacity of 72,000 tonnes per annum; however, it will be operated on a ten month per annum basis for an annualised throughput of 60,000 tonnes per annum. This represents approximately 10 per cent of the size of the proposed full-scale development to assess, refine and confirm the optimal flowsheet.

Sinosteel MECC is responsible for the engineering, procurement and construction of the Pilot Plant. The Pilot Plant modules are being entirely constructed in the People’s Republic of China and then transported and installed on site in Australia. Sinosteel MECC is the lead contractor on site and will manage all sub-contractors at Browns Range.

One of the sub-contractors appointed by Sinosteel MECC is local WA-based company, Primero Group, which has been appointed for the concrete, mechanical and electrical installation, testing and commissioning of the Browns Range Pilot Plant Project. Site work is expected to commence in the September quarter.

To minimise costs and maximise efficiency, mining is being undertaken in a single campaign by ASX-listed MACA Limited. 180,000 tonnes of ore and associated waste is planned to be mined over a six-month period, to be completed by the end of 2017. Waste material is being used to construct the ROM pad and tailings dam.

The development of Browns Range marks the start of the next chapter for Northern Minerals, following the discovery of the deposit in 2010. With rare earths prices increasing on the back of increased demand from the EV revolution, Northern Minerals is well placed to capitalise on this and deliver value for its shareholders.

Article first published in Minesite 17. Purchase your copy from the WA Mining Club website and call Craig Franklin on (08) 9279 9151 or email craig.franklin@iinet.net.au to secure your space in Minesite 18.