Member of the month: Celia Hayes 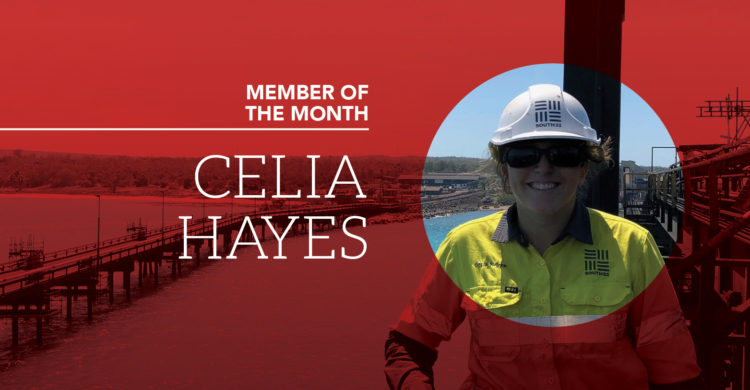 Member of the month: Celia Hayes

Celia Hayes, Environmental Specialist at South32, gained her first taste of the mining industry during her university break working with PwC as a research consultant.

Celia researched diversity across the top 500 mining companies and says she gained an “in-depth understanding of the breadth of the industry”.

Celia studied geology at the Royal School of Mines in London, her first real exposure to mining apart from “looking for amethysts and fool’s gold in the spoil tips by the old tin mines in Devon and Cornwall as a kid”.

During university breaks Celia conducted research with Women in Mining UK and PwC, working on a series of reports called “Mining for Talent”.

Through her degree she was given the opportunity to see one of the world’s largest lead and zinc mines which she says was “unbelievable as it was my first real point of contact with the industry”.

Post-university, Celia had hoped to become an exploration geologist working in Central Africa. However, as a budding hockey player growing up in the UK, Celia started suffering angle soreness at university.

This resulted in subsequent operations which unfortunately put an end to Celia’s hopes as an exploration geologist in Africa. Operations later, she became London-based working in the subsea oil and gas sector.

A move into offshore wind and renewables followed and then a job in Perth working in the area of sustainability.

She worked as an onsite environmental officer with South32 at two of its Australian operations before moving into her current role as an Environmental Specialist in the global environmental team.

Celia describes her role as “interesting and incredibly varied on a day to day basis”.

She says South32 is a “diversified miner with a true variety of different operations; commodity-wise and in terms of geographical location and maturity”.

With a large data and technology focused role, Celia is responsible for implementing new software for environmental teams to use on site and to verify and optimise South32’s processes. This includes capturing and assuring environmental data in a way that ensures accuracy and makes decision making simpler.

Celia moved from the office to the mine site recently when she headed a training course on environmental software at South32’s NSW operations.

Celia has a passion for “the circular economy way of thinking”, which aims to eliminate waste and the continual use of resources in contrast to the traditional production model of take-make-dispose.

Celia says she is working on implementing a circular economy way of thinking to South32’s processes and systems.

“This truly could unlock so much value for the company – not just through reduction or avoidance of waste, water but through key economic outcomes and a more collaborative way of thinking,” she said.

Celia says that if she wasn’t involved in mining she would be working in “sustainable finance and investment or based in the offshore wind industry”, which she finds fascinating.

Her boss in London left a memorable impact on how she operates today, showing her how a few simple rules could be used to tackle a complex problem — and those rules can be applied to almost anything. “He valued his workforce as the most important asset in the business,” Celia said.

As a member of the WA Mining Club, Celia values the opportunity to talk to people from across in a social forum. “It connects like-minded people and offers a platform for knowledge sharing and collaboration,” she says.

If she could, Celia would love to go to dinner with David Attenborough, Jacinda Ardern and Rowan Atkinson.

She would also change the world by removing all single-use plastics from the supply chain and “fast-track the wave around circular economy thinking by 20 years”.

In her spare time, Celia says she spends a lot of her time walking – “walking my dog mostly!” She loves to cook and has a bit of a travel-bug. Her current role in Perth has also allowed her ankles to heal to the point that Celia plans on rejuvenating her sporting side by taking up hockey again – perhaps the next hockeyroo in the making?