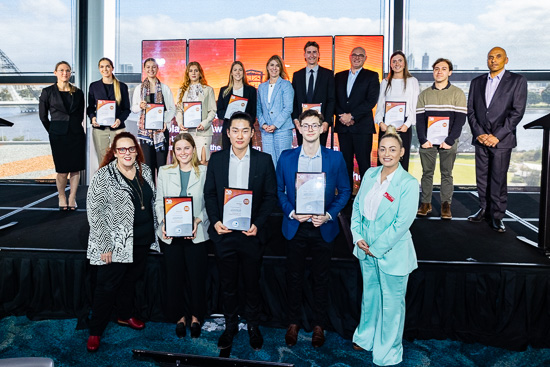 The WA Mining Club scholarship program has grown from strength to strength over the last 18 years.

In conjunction with industry co-sponsors, they aim to foster the development of the next generation of leaders in mining.

And according to Barry Upton, lead of the scholarship committee, the future is in very safe hands.

‘There were 111 applicants, which the scholarship committee sifted through to come up with the final 25.

‘Applicants across the board were of outstanding quality, and it was tough to choose the winners,’ he says.

‘And I think my optimism for the future has been renewed by engaging with these candidates.’

All finalists will get a complimentary WAMC membership for 2023 and complimentary attendance at the quarterly Young Professionals events throughout the year.

‘I encourage the candidates to take advantage of the mentoring opportunities at those events,’ says Barry.

‘You can rub shoulders with people who have vast experience in the industry.’

Barry Upton was himself a mining scholarship winner, which resulted in him becoming a mine manager at 24, quite an achievement.

‘That’s what a scholarship means, and I’m grateful for all the support the mining club gets from sponsors.

‘Not only do winners get $10,000 each, but they also get a voucher from ATI Mirage and a LinkedIn package.

Cricket great Justin Langer, speaking at the club’s monthly luncheon, told a personal tale of winning a scholarship at 18 and going to the UK to play county cricket for the Old Millhillians.

He stayed with the team’s head Nigel Ray, whom he greatly respects.

‘I was staying in a mansion with a multi-millionaire, and we were driving to the game in a Porsche with the roof down, and I thought it just doesn’t get any better than this.

‘I’m a curious guy, so I asked Mr Ray what the secret of his success is, and he said, Justin, you’ve told me you want to play cricket for Australia one day.

‘I reckon you’ve got no chance.’

It came as a bolt from the blue for the teenager who would become one of our most successful test cricket opening batsmen of all time.

‘I don’t see you practice or train any more than anyone else; you’re unfit, go to nightclubs and bars, and make a few runs, but that’s just on natural talent.

‘As far as I’m concerned, you’re only likely to be a good club cricketer.’

It was a valuable lesson.

‘To all the scholarship finalists, always stay curious and open with great mentors.

‘But they will change your life.’

There were no scholarship finalists for the fire safety category, so that will be held for next year.

Also, Iluka, which offers two scholarships, have bumped that up to three.