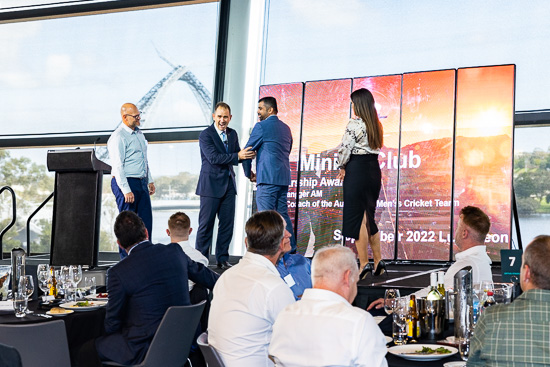 It was a packed house at the WA Mining Club September Luncheon at Optus Stadium, and the air was almost electric with a sense of anticipation.

Not only were the annual scholarships being awarded, the guest speaker was cricketing great Justin Langer AM.

Langer proved yet again why he’s in such demand as a motivational speaker and champion of transformational leadership.

‘Physical – I think is there anything I can do to get physically stronger, to help me to be the best performer in the world?

‘Technical – can I practise my cover drive, pull shot, and sweep shot..

‘So I’d look at it and go cool, today I can practise that to get better.

‘Mental – my goal setting, my mental health. I’d check it; if I couldn’t tick that box, I’d go and talk to someone, see my psychologist, or talk to one of my mentors.

‘The truth is there’s never enough hours in the day to master your skills, whatever you do.’

‘But I’ve never forgotten a saying I used to see in the change room,

Justin Langer also spoke of overcoming the most significant setback in his career, being sacked as coach of the Australian cricket team in February 2022.

‘I woke up, the day after I was sacked from my dream job, it was the pinnacle of coaching, and I thought it was all over.

‘It was a revelation; the truth is things will go wrong, they’ll get tough, there will be adversity, and it’s hard.

‘So when it comes along, see it like a master, see it as an opportunity.

‘My advice is to keep standing tall, being proud, and moving forward.’

He also warned young professionals not to be in a tearing hurry to get to the top of the pile.

‘Every industry I talk to, medical, mining, education, sport etc., everyone is saying the same thing; the kids are in such a hurry, they want to be the CEO before they’ve even learnt how to make coffee for us.

‘My point is to be patient, take your time, do the apprenticeship.

‘I had already been coaching, so I applied to coach the Australian Cricket coach 12 years ago.

‘I didn’t get the job then, and I was shattered, but it turned out to be the best thing ever.

‘If I hadn’t coached WA for seven years and done the apprenticeship, I wouldn’t be standing on this stage now.

‘So be patient, take your time and do the apprenticeship; you’ll be so much better when the big opportunities come along, you’ll be ready take them with two hands.

‘Never underestimate the importance of doing an apprenticeship.’