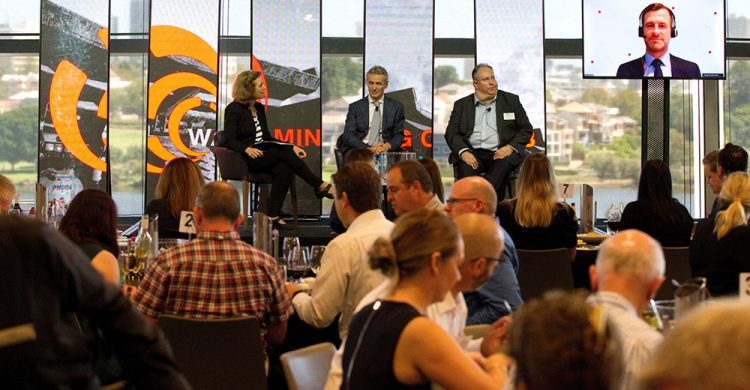 The year 2021 will set the groundwork for a decade of great growth opportunities and the transition to renewable energy, NAB’s Head of Commodity Research Lachlan Shaw told the audience at our February luncheon.

Speaking as part of a panel discussing the market outlook for 2021, Mr Shaw said he was “quite bullish”.

“The global economy and commodity markets find themselves with a huge amount of demand coming through from stimulus,” Mr Shaw said.

“We are about to get a big lift in activity as vaccines take effect around the world and that will be weighted to the second half of the year.

“Commodity prices are trading very strongly; copper at nine-year highs, knocking on the door of $US10,000 a tonne; iron ore at $US172 a tonne, near all-time-record highs in Australian dollar terms; oil prices range now up to $US67, and markets continue to normalise.

“Prices can continue to maintain current strong levels and potentially move higher. The supply side needs time to invest in new capacity before we see that lift in overall production volume, so I think this year is going to be a good year for the resources industry.”

Mr Twigger said WA was “shooting the lights out” in financial activity for the mining sector.

“You can feel the vibe and the energy here,” he said. “The last six months of last year was spectacular. We raised more money on the ASX for mining stocks than has ever been raised before, and the ASX was the number one exchange for IPOs; almost 90 per cent of global IPOs took place on the ASX, and that’s the ultimate barometer for risk.

“It’s flowed into this year on the back of this structural change as we emerge from this pandemic and every economy around the world is being stimulated.

“There is money flying and ahead of that commodity prices are running.

“We’re in another supercycle and we’re in for a great run for the next three years.”

“There will continue to be volatility, with winners and losers.

“It will be fraught with risks and challenges, and not all boats will go up with the tide,” he said.

The Trust Deficit and ESG

Ms Ivory said Deloitte had recently published its Trends in Mining 2021 report, which revealed the biggest issue facing executives was the trust deficit.

For Mr Shaw, the trust deficit is also linked to issues of ESG.

“One of the key themes that I’ve seen emerge rapidly with huge momentum in capital markets in the industry is this trend towards sustainability and ESG, which comes back to the reputation of mining being dirty.

“The reality is, when we look at the Paris Agreement and move towards net zero emissions… the world’s power sector and the world’s industry does not decarbonise without products produced by the mining industry.”

He said that included copper, silver for solar voltaic cells, aluminium and steel for wind farms, lithium, nickel, cobalt and graphite for batteries.

“There is a real opportunity for the industry to get on the front foot in terms of publicity and outline the fact that without mining that renewable energy transition and net zero doesn’t happen.”

“There was $288 billion raised last year and put into sustainability funds. They’ll put money into you if you can show your climate change policy, that you’re looking for a net zero carbon emission. You’ve got to be able to demonstrate that, so ESG is fundamental,” he said.

Mr Shaw said one of the opportunities arising from decarbonisation and ESG — which played to WA’s strengths — was around battery raw materials.

“Looking at WA, the key opportunity is really around battery raw materials, lithium and nickel.

“Last year, global EV sales were up 40 per cent when global auto sales fell by 15 per cent, and in Europe EV sales were 10 per cent of market share, and that’s only set to grow.

“On the nickel side, it’s the same set of dynamics playing out, and again WA is very well placed.

“The final thing I’d add from the energy side is around hydrogen. To decarbonise many of the world’s hard-to-decarbonise sectors being oil and gas refining, some petrochemical sectors, steel making, green hydrogen will be a key part of that solution.

“Green hydrogen needs lots of renewable resources — solar and wind — and WA is blessed with that potential.

“The industry is scaling up. Last year there were 230 megawatts of electrolysers deployed globally; the order book now is above 20 gigawatts and growing rapidly.

“There’ll be a real opportunity over time and the playbook will be to build those industries in joint ventures with customers in North Asia, Japan, South Korea, Taiwan.

“The biggest opportunities of this renewables revolution energy transition for WA would be battery raw materials with lithium and nickel, and then green hydrogen.”

Mr Wath said the fractious relationship with China would only be eased by the hard work of wise people.

It was time, from an Australian perspective, to look for ways to achieve a better bilateral relationship.

“We’ve seen over the last six to nine months the relationship played out in short sound bites on social media and in headlines generally. That is not enough to get this right,” Mr Wath said.

“The reality is China is a $14 trillion economy… In the past there was a reasonably constructive relationship between Australian and China.

“Currently clearly it’s not. It’s very important to do the right work now to get it back, and I think that is possible.”

Asked to name their commodity tips for the year ahead, Mr Twigger said nickel, Mr Shaw said lithium, and for Mr Wath it was information.