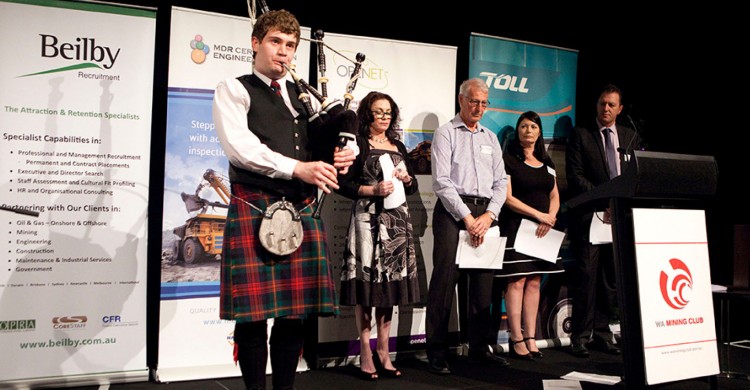 WA Mining Club members and their guests once again filled the Grand Ballroom of the Hyatt Regency Perth for the annual St Barbara’s Day celebrations, commemorating the patron saint of the mining industry.

An important day on the mining industry calendar, St Barbara’s Day is a time to remember those who did not return home from work this year. According to Safe Work statistics, as of 7 December 2016, Australia had experienced six mining-related deaths over the year to date, and one-minute silence was observed to pay tribute to those no longer with us.

While the annual event can be a solemn occasion, it also provides the opportunity to reflect on the year that was and appreciate the people dedicated to the mining industry and celebrate the rich endowment of mineral wealth that underpins much of our economy and provides hope for the future.

It was this theme in mind that a spritely Mining Legend and WA Mining Club Hall of Fame inductee Ron Manners chose not to use the stairs to the stage, but rather leap to the stage with the energy of a young man to give the key note address.

Drawing on management guru Peter Drucker’s work, “Culture eats strategy for breakfast” Ron reminded the 400 strong crowd that in tough times helping each other out matters. It’s all about establishing the right organisational culture.

“You can get all the strategy right and do everything perfectly and still go broke,” he said.

“Culture is something we should really concentrate on. We need to if we are going to exist because this industry of ours, has developed a terrifying reputation for not being prepared for what is obvious to the rest of the world.”

Sharing the lessons of his own extensive career, Ron focused on developing personal and corporate culture and character. His message was simple. Your personal and professional reputation matters, take care of your own because you never know when you might need the favour returned, and keep your eye on the bigger picture.

“We tend to focus on measuring outputs rather than outcomes,” he said.

“Doing business is a fine art if you want to be invited back again.”

His message obviously resonated with the crowd and the positive sentiment for the coming year could be heard in the chatter at the bar afterwards.

A big thankyou to the Hyatt for looking after the WA Mining Club throughout the year.