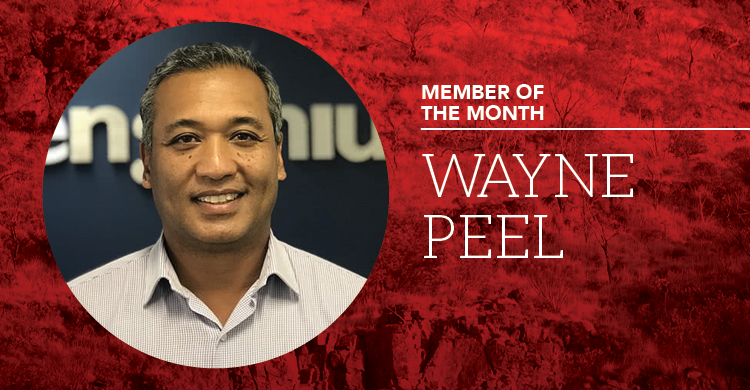 Growing up with a geologist father and a mother who worked in mineral laboratories in Tom Price, mining is in Wayne Peel’s blood.

“In my first job after graduating from university, I worked in a research and development company, developing technology that assisted in the exploration and interpretation of geophysical data for miners.”

This was the beginning of Wayne’s 25 year mining career, which has included work as a Research and Development Engineer, Systems Engineer, Project Engineer, Project Manager, BD Manager and Senior Executive at several Engineering, Technology and Services companies.

“Since 2003, we have worked with juniors and major companies, taking their projects from conceptual ideas to operating mines that generate revenue, shareholder returns and many jobs for Western Australia,” Wayne said.

With the company expanding nationally, Wayne hopes to set up an international office in the medium term.

He said the most interesting part of his career was experiencing the rise and fall of the mining boom from 2005 – 2015.

“It was an interesting once in a lifetime experience. It was certainly a prolonged time of excitement during the up cycle and adversity during the down cycle. I don’t think many people appreciate that the previous mining cycles were shorter. Overall, I think the industry has become much stronger and smarter as a consequence.”

He said over his career he had had some ego-driven bosses from whom he had learnt what not to do.

“They made a lot of decisions that weren’t the best for the business, and they were terrible,” Wayne said.

His best boss was a role model for the company’s values and walked the talk.

“He was a great communicator of a vision and was excellent at acknowledging the efforts of the team.”

Wayne lists Yorkshire in the UK as the most intriguing place he’s visited in his mining career, given it’s not a traditional mining province.

But wherever he travels he finds interesting things.

“I love digging deeper into the culture of other places and meeting the real locals,” Wayne said.

Born in Rangoon, Myanmar (formerly Burma), Wayne’s family moved to Australia when he was two, so he classifies himself as an Aussie.

On the weekends you’ll find Wayne playing guitar, fishing, reading, playing a round of gold with mates and hanging out with his family, usually exploring the best eats around Perth.

“It’s a long process but the end result is so tasty,” Wayne said.

Being the only bloke in a houseful of women, he counts himself lucky to have two great teenage daughters and ‘a wonderful and very patient wife.’

In high school Wayne wanted to be a rock star, playing guitar in a band that gigged regularly.

“It was great fun, but it wasn’t to be my destiny.”

Clearly still passionate about his music though, he includes Paul McCartney as one of three guests who would invite to dinner, if given the chance.

“I was a break-dancer in the 80’s and have a mean moonwalk.”

Wayne recently joined the board of 100 women, a not for profit organisation that enables everyday people to be involved in creating a world where all women and girls can live safely with access to health, education and economic freedom.

“I am also being a mentor to some amazing entrepreneurs/engineers and hope to see them succeed,” Wayne said.

If he wasn’t in the mining industry Wayne said he would be a tech start up guy in San Francisco.

“I’ve been offered jobs there in the past and almost took one of them about 15 years ago.”

In the future, he would love to see WA become the ‘Silicon Valley of the mining world.’

“We have the best people, the largest mining companies and the right entrepreneurial spirit. I think we are on the right path, but I would love to speed it up so we can lead the way to the future of mining, globally,” Wayne said.