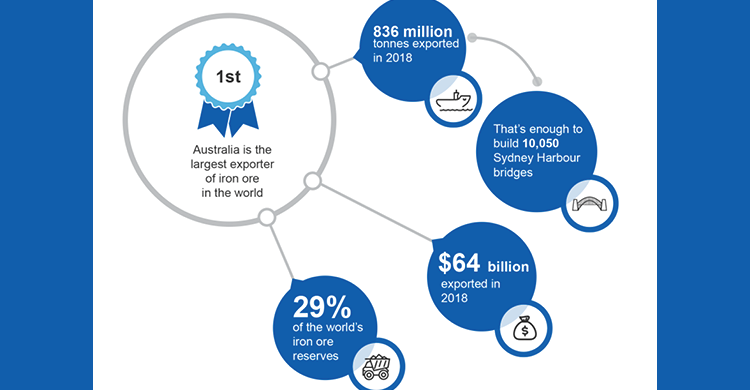 New figures released by the Department of Industry, Innovation and Science’s Office to the Chief Economist, suggest that the mining and resources industry contributed 57 per cent of all goods exported from Australia in 2018 and contributed 21 percent to GDP growth in the year to the December quarter.

The prices of Australia’s major resource commodities have recently hit seven-year highs, however according to the Resources and Energy Quarterly (March 2019), are likely to soften due to weaker demand and increasing supply.

Supply issues, mostly in other producing countries, have had a positive effect on commodity prices. Combined with a weaker than expected Australian dollar, the nation’s resources exports are expected to hit a new high of $278 billion in 2018-19. This is expected to level out after 2021-22.

Australia is a front runner on the global gold market, being the second largest producer in the world. In fact, gold has consistently been one of Australia’s major export commodities since the modern gold rush of the 1970s and 1980s.  This is good news given gold prices are projected to rise gradually over the next five years, to an average of US$1,428 an ounce in 2024. This is strongly influenced by gold’s status as a safe-haven asset, fuelling investor demand and global mine site declines from 2020.

Both Australia’s export volumes and values are expected to peak in 2019-20.  The value in this period is expected to be $22 billion, with volumes reaching 377 tonnes. Rising export volumes will be driven by higher local mine production.

After this period however, export volumes are expected to soften, falling 6.1 per cent to 293 tonnes in 2023-24.  This steady decline will be driven by lower domestic production and lower imports of gold ore from Papua New Guinea for refining (shipped to Perth Mint for processing and re-export).

Western Australia is also the dominant state for nickel. As the fifth largest nickel miner in the world, the commodity contributes $3 billion in export revenue to the Australian economy.

Globally, nickel prices have fallen to below US$12,000 a tonne in the first quarter of 2019, reinforced by extra supply from Indonesia and the Philippines. Prices are expected to lift steadily, reaching US$14,000 a tonne in 2024. Should geopolitical uncertainties reduce, or China adopt stimulus measures to offset these issues, the nickel price could increase significantly. Battery demand could also see upward pressure on nickel prices.

The next five years will see an increase in production due to several new mines in Western Australia, and a recent upgrade to the Kwinana nickel refinery.  Output in expected to increase from 167,00 tonnes in 2018-19 to 290,000 tonnes in 2023-24.  The major trigger for recent expansion appears to centre around expectations for the future of the electronic vehicle market.

Nickel exploration expenditure has eased after a string of strong results, with most exploration now occurring in Western Australia.

The majority of Australia’s lithium deposits are also found in Western Australia. Australia as a whole has 17 per cent of the world’s lithium reserves and is the world’s biggest exporter.

Again, electronic vehicle batteries are expected to account for almost all of the demand growth for lithium over the outlook period. The ramp-up in electric vehicle and battery facilities is expected to increase global lithium demand and consumption four-fold over the next five years, from 234,000 tonnes in 2018 to in excess of 830,000 tonnes in 2024.

According to Resources and Energy Quarterly (March 2019), Australia’s iron ore export revenues are expected to increase by 21 percent to $74 billion in 2018-19, the second highest on record. It’s not just the export earnings which continue to grow but also the volumes.  Australia’s export volumes growth is forecast to increase 1.5 per cent annually from 847 tonnes in 2018-19 to 874 tonnes in 2020-21. Despite the impending closure of BHP’s Yandi operation, expected in the September quarter of 2020, the ramp up of other operations, in particular South Flank and Jimblebar, are expected to maintain production targets.

Following the Brumadinho dam collapse at Vale’s Corrego do Feijoa mine in Brazil (January 2019), and the closure of several trailing dams the global iron ore price has seen an upward trend. The result of these closures is expected to reduce global supply by 46 million tonnes in 2019 and around 25 million tonnes each year thereafter until 2024. This has resulted in Australia’s iron ore export earnings to be forecast at $74 billion for 2018-19, up from $63 billion in 2017-18.

The Resources and Energy Quarterly (March 2019) full report, together with more information on data or government initiatives can be found by accessing the Department’s website at: www.industry.gov.au/oce

Note that all content cited in the article remains the property of Commonwealth of Australia and cannot be reproduced by WA Mining Club members without acknowledgement.