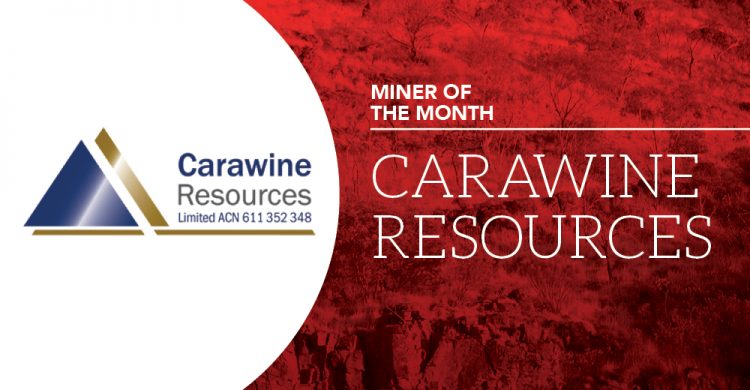 MINER OF THE MONTH: Carawine Resources is an exploration company with the aim of developing economic gold, copper and base metal deposits within Australia.

The company has four projects, each targeting high-grade deposits in well-established mineralised provinces throughout Australia.

The company’s main project is the 100 per cent owned Jamieson project, located near the township of Jamieson in the north-eastern Victorian Goldfields.

Jamieson contains the Hill 800 gold-copper prospect that was discovered by New Holland Mining in 1994 and the Rhyolite Creek copper-gold and zinc-gold-silver prospect, both of which sit within Cambrian-aged felsic to intermediate volcanics.

The Rhyolite Creek prospect, located about 5km south of Hill 800, was discovered in 2008, by diamond drilling intersecting a zone of strong alteration and sulphide mineralisation returning high-grade zinc, gold and silver from an interpreted seafloor Volcanogenic Massive Sulphide (VMS) system.

Recent work at the Jamieson project entailed a detailed helicopter-borne magnetic and radiometric (heli-mag) geophysical survey that provided support to the company’s belief in the potential for porphyry targets beneath Hill 800 and Rhyolite Creek, by confirming existing targets and providing a number of exciting new anomalies.

Carawine intends using the results from this survey to model the size and depth of each anomaly, which can then be prioritised for drill testing.

The study revealed a magnetic high anomaly potentially down-dip from Hill 800 the company interpreted to be characteristic of the typical geophysical response from a mineralised porphyry copper-gold stock and is therefore high on its priority list for modelling and drilling.

The remainder of the company’s portfolio is located in Western Australia, the main focus of which is the Paterson project, situated in the Paterson Province at the eastern edge of the Pilbara Craton.

Neighbourhood wise, the Paterson area hosts some well-heeled residents, including the Telfer gold-copper deposit, and the Nifty and Maroochydore strata-bound copper-(cobalt) deposits.

Carawine scored a Joint Venture double banger in regard to the Paterson project during 2019.

The farm-in and JV will explore Carawine’s Baton (E45/4871 & E45/4955) and Red Dog (E45/4881) Tenements where it has identified more than twenty high-priority target areas, covering a range of potential deposit types in the Paterson region, all requiring follow-up exploration.

“To have one of the world’s largest resources companies committing to significant expenditure on our Baton and Red Dog tenements is a strong endorsement of the prospectivity of the Tenements,” Carawine Resources managing director David Boyd said.

“They have the technical knowledge and resources to rapidly and systematically evaluate the numerous high priority targets at Baton and Red Dog, increasing the chances of a successful discovery.”

Carawine backed this up by striking a farm-in and JV Agreement with a subsidiary of FMG Resources (ASX: FMG) that will cover exploration of the Lamil Hills (E45/5326), Trotman South (E45/4847) and Sunday (E45/5229) tenements.

Lamil Hills is within 30km to the northwest of Newcrest Mining’s Telfer gold-copper mine; Trotman South is 30km to the south of the Telfer mine; and Sunday is within 5km of Metals X’s Maroochydore copper-cobalt deposit.

Under the terms of the agreement FMG will explore Carawine’s eastern Paterson project tenements targeting copper, gold and base metals.

Fortescue is to pay $125,000 cash up front and spend $0.5 million on exploration in the first eighteen months.

Elsewhere in WA, Carawine has the 100 percent owned Oakover project, located in the Eastern Pilbara region, comprising fourteen granted exploration licences and one exploration licence application with a total area of about 2,500sqkm.

The Oakover project is prospective for copper, cobalt, manganese and iron.

Carawine has a JV with Independence Group (ASX: IGO) over the Red Bull, Bindii, Big Bullocks and Similkameen tenements, in which IGO currently hold a 51 per cent interest with prospect of earning an additional 19 per cent interest by spending $5 million by the end of 2021.