Miner of the month: BCI Minerals

Miner of the month: BCI Minerals

BCI Minerals (ASX: BCI) is determined to once again, as in the heydays of the iron ore boom, become a medium sized mining company.

The company hopes to achieve its aim by generating earnings from its iron ore and industrial mineral projects located in the Pilbara region of Western Australia.

True to its roots, iron remains at the heart of the company in its Iron Valley mine near Newman and the 100 per cent-owned Buckland iron ore project near Pannawonica.

Iron Valley is a producing mine with a mine life of approximately 15 years based on current production rates.

It is operated and managed by BCI’s operating partner, Mineral Resources (ASX: MIN), which recently executed an all scrip takeover for Atlas Iron.

The mine is operated and funded by MIN, which pays BCI a royalty as a percentage of MIN’s FOB realised sale price.

The Iron Valley mine generated revenue of $63.5 million and EBITDA of $18.3 million for BCI Minerals in FY17.

Although 60 per cent iron products have recently attracted historical discounts to the 62 per cent iron index, Iron Valley is still providing a steady income stream.

BCI is advancing the Buckland iron ore and Mardie salt projects, which are both proposed to export product through the company’s planned 20 million tonnes per annum Cape Preston East Port facility. 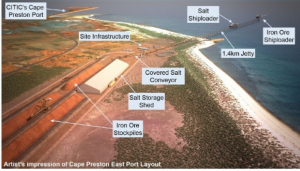 In January, BCI Minerals inked a non-binding memorandum of understanding (MoU) with Sinosteel Australia to support development of the project.

Results from drilling at Buckland (at the newly acquired Kumina Tenements) have been encouraging.

The results initiated a major drilling program on the Kumina Tenements.

“This drilling at Kumina is to consist of at least another 300 holes to be drilled into the Kumina deposit,” Vorster explained.

“The Buckland project already has the Bungaroo South Resource, however, that is too small to support our envisaged 15 million tonnes per annum over 15 years operation.

“We bought the Kumina tenements targeting at least 100 million tonnes mining inventory additional to the Bungaroo South tenement, which should provide sufficient scale to make the entire Buckland project stack up to our investment hurdles and long-term ambitions.

“We anticipate releasing a maiden Kumina Mineral Resource estimate at the by mid-year.”

Earlier rock chip sampling at these target areas returned grades of greater than 62 per cent iron from most of results with best results of up to 67 per cent iron.

Channel iron deposit targets B and C will also be included in the program.

“This tenement has had no drilling activity for over three decades,” Vorster said.

“We identified outcropping high-grade bedded iron deposits – which is different to most other deposits in the Western Pilbara region that are channel iron deposits normally containing around 57 to 58 per cent iron.

“In the new iron ore world with higher discounts if your product clears the 60 per cent iron level you immediately move to selling into a different market segment at a different price point. 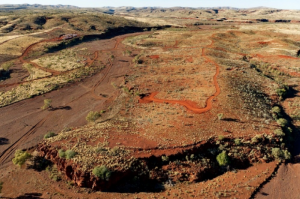 Such is the BCI emphasis on higher grade discovery, that should the Kumina drilling program achieve, hopefully exceed, its objective of identifying 100 million tonnes of excellent quality mining inventory, it may be feasible for BCI to consider developing Kumina as a separate, standalone operation like the company ran in its early days at Nullagine, by shaping an infrastructure partnership with an existing player.

“The significant difference will be the grades…Nullagine was 57 per cent iron, but we are expecting to see much higher quality at Kumina,” Vorster said.

BCI Minerals also sees potential upside within its 100 per cent-owned Mardie salt and sulphate of potash (SOP) project that sits on the WA coast between Onslow and Karratha.

BCI has progressed its Pre-Feasibility Study enhancing the viability of the Mardie salt project.

BCI plans producing a high purity salt for use in industrial applications, specifically targeting the Asian market, where analysts predict salt consumption in the Asian chlor-alkali and soda ash industries to grow by approximately 4.3 per cent per annum from around 110Mtpa in 2016 to approximately 170Mtpa by 2026.

“We believe the Mardie salt project is one of the last available sites of its size in one of the best locations in the world for a solar salt operation,” Vorster said.

“One change being covered in the PFS is that we are planning the processing circuit to also produce a component of sulphate of potash as a by-product.”

This turns the usual way a sulphate of potash (SOP) project operates upside down.

Many current Australia-based SOP projects produce lower quality salt as a by-product that ends up as waste due to the distances these projects are from port.

BCI will produce a high-grade industrial salt with SOP by-product that will both be within an economically viable distance from its Cape Preston East port.

Because the capex to establish the Mardie salt project will be high, BCI is open to discussion with JV partners, be they other producers or buyers.

Another option is the possible spin out of Mardie in an IPO.

“The rationale behind that is that Mardie has a long lead time to production but then has a 50-year plus mine life,” Vorster said.

“It is therefore a type of investment where very specific investors should be targeted, rather than the same investors who are attracted to quicker earnings from more volatile commodities.

“The reality is that while Mardie is sitting within BCI, we really won’t realise full value for the project.”

Targeting technical and ownership solutions for both projects during 2018 appears like an ambitious target, but Vorster says with an excellent management team and supportive board positive progress is being made on all fronts.