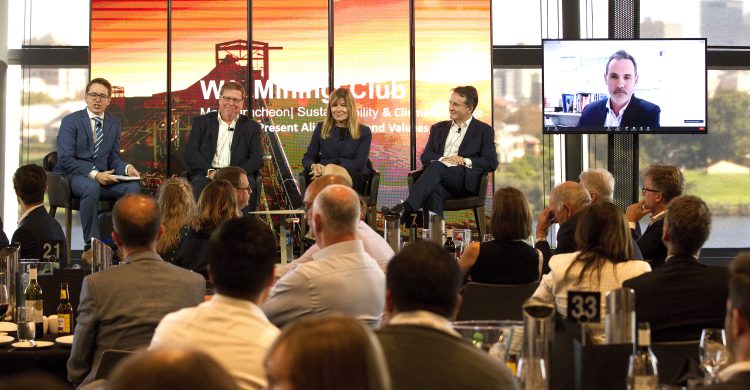 The mining sector’s use of water, its approach to impending mine closures, and delivering social dividends to communities were highlighted by a panel of experts at the WA Mining Club’s May lunch as issues that will become increasingly important for companies to navigate.

Mr Beazley, a former chief operating officer at Sandfire Resources, which established a solar array at its DeGrussa mine that is the largest integrated off-grid solar and battery storage facility in Australia, nominated the use of water.

“We don’t actually… pay any kind of quantum rate per litre or mega litre, unlike some other industries.

“Water overall, particularly fresh water, is scarce and most of our industries rely on fresh water or potable water. As industry expands, that’s going to put more pressure on water supplies from aquifers.”

Mr Beazley said Anglo American was tackling the issue, attempting to not only be a net-zero greenhouse gas emitter but also a net-zero water user.

“They’re good leaders to watch and learn from about what they’re doing with water, and as populations grow and put more pressure on water, it’s certainly going to be something that will come under the spotlight so as a mining industry we can take charge of that (and) we’ll do ourselves a great deal of good in terms of how we’re viewed by the general public and various stakeholders.”

Mr McCombe said it was important that the mining industry does not “forget the S in ESG”.

“That’s absolutely at the forefront and critical to our thinking right now; our social performance if you like,” Mr McCombe said.

“I don’t need to tell anyone how critical our partnerships with Australia’s first nations people are at the moment.

“We’re going through a reset of those relationships and that’s going to continue for a very long time.

“The industry is also changing. We’re evolving, our workforce is evolving. Those entry level jobs are changing, and the strong value proposition for our industry, our social acceptance if you like, is what does that mean for our local communities, our regional and remote populations, because the workforce is going to look fundamentally different in five to 10 years.

“What’s the next model we need to adopt to leave a lasting, positive legacy outside of just jobs which we’re obviously providing at the moment?

“How do we ensure we support the development of businesses, and the enduring nature of those businesses when mining ceases?

“Closure is a critical issue for our industry; our ability to leave a positive legacy on balance in the landscape is increasingly important, especially because we’re starting to see some of those big sites finally start to close after many decades of operation.”

The pressure to decarbonise

Ms Terry said Fortescue did not accept that it was reacting to pressure from investors and stakeholders when it made commitments around decarbonisation.

“There’s such a growing interest in climate change and other matters of sustainability. So, whether that be our investors and shareholders, media, our own employees, they are all tremendously interested in what we as a company are doing so that’s one of the reasons why Fortescue increased our commitment,” she said.

“We had previously said we would be net zero by 2040 and in March this year we announced that we would bring that forward and we would be net-zero by 2030; an industry leading and extremely ambitious target that that is now being adopted and worked across the whole organisation.”

Mr O’Brien said that in the industry generally the pressure had started with investors with questions raised at annual general meetings, but that has changed.

“Part of it is you can save a lot of money if you don’t use so much diesel, but if you look at where the momentum is now it’s from government regulation,” he said.

“The EU is obviously driving pretty hard, but the Biden administration has suddenly changed how the world is moving. All our trading partners in Asia and China, Japan, Korea, all have net-zero targets and that’s changing everything.

“Now the supply chains are starting to demand it.  For instance, when will Mercedes launch its first carbon neutral electric vehicle?  Everything in that vehicle from the mine all the way through the shipping and the production is going to be carbon neutral.

“When is the first carbon neutral building office block opening in London or New York or Berlin? That’s going to have concrete and steel and glass and everything in that building, everything from the mine site all the way through (will be carbon neutral).

“That’s going to be a massive commercial driver, and the investors and the government will be irrelevant. The end customers will be the biggest drivers.”

Discussing Sandfire Resources’ decision to develop solar and battery power supplies at DeGrussa, a process which started well before he joined the company, Mr Beazley said it came about because of the culture of the company wanting to be a market leader, and an “appetite to do better”.

“But there’s a more broader sense that if we can demonstrate our ability to be a leader in terms of greenhouse gas emissions and other aspects, we saw benefits in terms of new areas of finance, better terms and conditions,” Mr Beazley said.

“In terms of upstream and supply chain, we get better terms on our customers. We knew in time they’d be looking for cleaner and greener products.”

He said Sandfire had received some criticism for its approach, but they were leaders in change and today they can “hang their hat up because there’s not too many minesites that are not seriously thinking about renewables in terms of solar and wind”.

“The work that was done by Sandfire has really changed the industry as we know it.”

Ms Terry said that from a business perspective, the decision to move rapidly to green energy through its hydrogen initiatives was founded on the basis that Fortescue was, ultimately, an export company.

“We see that hydrogen and green hydrogen in particular is a massive export opportunity for Australia,” she said.

“In the Pilbara we get more hours of sunshine per day than any other part of Australia, and the technology now being able to harness that considerable renewable resource, whether it be solar or wind, is going to be a real game changer for this next part of our business.

“We have the ability to test and benefit from green hydrogen across our own operations.

“One of the numbers that really focused our mind is that if we project out just a few years, our diesel usage could exceed one billion litres a year. From a pure commercial imperative, that’s something that we’ve set out to address and we have the opportunity to do that first in our own operations.”

Mr O’Brien, who along with Deloitte was involved in development of the National Hydrogen Strategy, said that three years ago he was sceptical about hydrogen’s use.

“But there’s some niches where hydrogen is going to be the only way we’re going to decarbonise — and those niches are really big,” he said.

“If all the red dirt that happens to exist in WA is going to continue having value, hydrogen has to work.

He said it was important to consider the entire supply chain, not just think about the cost of production.

“How are you going to get it somewhere, what are the costs, what are the practicalities of delivering into that market?” Mr O’Brien said.

“And then there’s also the challenge of blue versus green hydrogen.  Do you make it from fossil fuels, do you make it from renewable energy? It’s a lot cheaper to make it from fossil fuels. Will the customers accept fossil-fuel based carbon neutral hydrogen? I’m not sure that question has been resolved. Eventually green hydrogen will win, and the timing of that transition is interesting and different companies in Perth would have a different view of that.”

Mr Beazley said that in the long-term mine sites would look to hydrogen as a power source.

“Unless you can get renewables to work 90 per cent of the day on average, you’ll be looking at hydrogen, longer term, if you want to get away from fossil fuels,” he said.

In the short term, a hybrid mix would include solar, wind, and battery storage.

Ms Terry said that while Fortescue was founded on the basis that it wanted communities with which it worked to benefit from its success, the focus on ESG had changed significantly in the past three years.

Previously, ESG issues were not a “big part of the conversation” during investor and analyst presentations.

“More recently, we’ve had requests from investors and analysts to only talk about ESG, so there’ll be a call, which is completely focused on what is Fortescue doing in climate change and instead of being almost a sideshow or an add on, it’s now very much a core part of the conversation,” Ms Terry said.

Mr O’Brien agreed: “The conversations are very different now; you’re not talking to the sustainability manager anymore, it’s the CFO, it’s all about strategy and finance.”

Mr Beazley said if companies did not embrace ESG and tackle carbon emissions they will lose investment.

“We will see the impact right through the whole value chain from all our suppliers to the actual mine itself. If we don’t change, we’ll be forced to change, or you’ll go out of business because others will,” he said.

Attracting the next generation of employees

Mr McCombe said the mining sector had to tell its story more effectively.

“The industry is highly skilled, highly paid and with an increasingly diverse workforce,” he said.

“We need to tell those stories, but we need to ensure the environment we construct in our workplace is a safe space for diversity.

“We’re seeing some great successes across the industry, some leading examples through different companies, and we need to see that more.

“I talk to all sorts of environmentalists who say, ‘Oh well we need to just shut down mining, that’ll solve everything”.

“We need an awful lot of commodities. They may be different from what they were in the past, but mining is absolutely essential. If you don’t have mining, you will not transform the economy.”