June Member of the Month 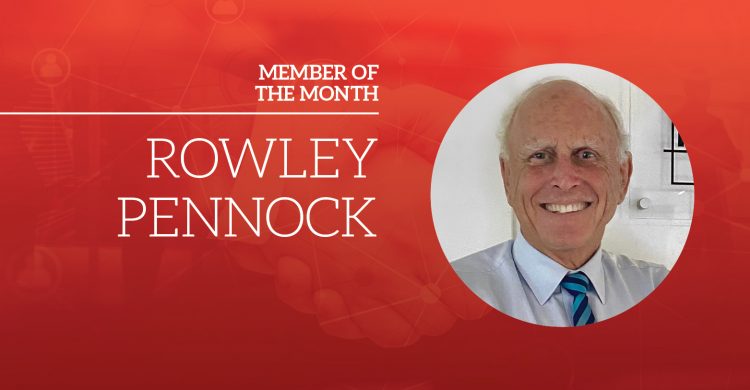 June Member of the Month

Rowley Pennock has always been a globetrotter, travelling the world from an early age.

“I went to 11 schools in four continents including Sri Lanka and Jamaica,” he said.

“My father was in the British Foreign Office; it was a fantastic experience going around the world.

“I was even in Cuba when Castro was fighting Batista during the civil war in 1958.”

Having left the University of WA in 1968 with a BA in economics and BCOM in accounting, Rowley’s 52-year career in the mining industry began when he started as an investment advisor for Ian Potter & Co. stockbrokers — a position that gave him a front-row seat to one of the mining sector’s legendary events.

“While working on the Melbourne stock exchange floor, I witnessed the Poseidon shares go from $0.70 to $285 in three months,” Rowley said.

“It was an experience to be on the stock exchange floor when it happened, back before technology when people were running out on the floor.”

By the early 1970s, the stock market bubble had burst, and the hysteria of the market was over.

“I came back to Perth as an investment advisor, but the office closed down in 1971 as a result of the credit squeeze,” Rowley said.

He found work with Shell as a graduate trainee and it was there, in 1972, while running a Shell service station in West Perth, that he last wore his work boots. Rowley then became an area manager responsible for 40 service stations in Perth.

After many interstate management positions in marketing, operations and finance, Rowley became Shell’s operations manager in Western Australia from 1985 to 1991, and it was where he met his most memorable boss Ian Freer, a director of Shell and Woodside.

“He was a great mentor who had a consultative management style and always considered different ideas,” Rowley said. “He got the best out of people.

“From Ian, I learned, and now apply for myself, that to get the most out of people you need to ensure staff are challenged, rewarded, and enjoying what is in front of them.

After becoming a consultant for Michael Downing in 1993, Rowley founded and became the managing director of Pennock Executive Recruiting in 1997.

“Pennock Executive Recruiting’s role is to recruit executive and professional staff predominantly for the mining and service industries,” he said.

“At the moment it is full steam ahead and business as usual.”

Rowley works alongside his son, David, who recently took over the business.

“I have been very lucky you know; I’ve had some very interesting experiences and now to hand it over to my son is very rewarding.,” he said.

Rowley’s major achievement in recruiting was when he recruited Bill Beament for Northern Star.

“We put him into Northern Star in 2007 when the share price was only one cent and it had nothing. Now Northern Star is the sixth largest gold mining company in the world as a result of his leadership,” he said.

“When I was asked why we put forward a mining engineer for the job, I said, ‘because if you haven’t got a mine, he’ll get you one’.

“We recognised that he had so much drive and energy and the ability to succeed.”

Rowley became a member of the WA Mining Club 28 years ago and enjoys the quality presentations, professional organisation, lunches and, most importantly, the networking.

“The number one thing I value about the WA Mining Club is that it’s a platform to keep in touch with people in mining,” he said.

“I have established wonderful connections and memories around the club.”

Rowley also believes that the luncheons touch on issues facing the mining industry.

“The single biggest issue that I see for mining is ESG, as discussed at a recent luncheon, as well as the need to adapt to renewables, and support the renewables sector with minerals from mining,” he said.

If Rowley were not involved in mining, he would be a politician.

“Why? Because I would like to make a difference for WA and Australia, including incentives for manufacturing in the State,” he said.

In his spare time, Rowley enjoys tennis, going to the beach, holidaying in Yallingup, and socialising with his friends, five children and 10 grandchildren. He has had a run and swim at North Cottesloe beach every day before work for the past 30 years.

“To keep working, you have to keep fit,” he said.

If he could invite three guests to dinner, they would be the Dalai Lama, Vladimir Putin, and Joanna Lumley.

“This trio spring from COVID for me,” he said.

“In 2020, at the beginning of COVID, I started to read the Dalai’s Art of Happiness and was very impressed by what he had to say.

“Soon after I read Putin’s biography and thought that the combination of heart and ruthlessness would precipitate an interesting dinner conversation; put them together and see what happens!

“To moderate the conversation – who better than Joanna Lumley; clever and funny.”

One thing Rowley would like to change about the world is that people allow others to have different views and opinions and to always treat each other fairly.