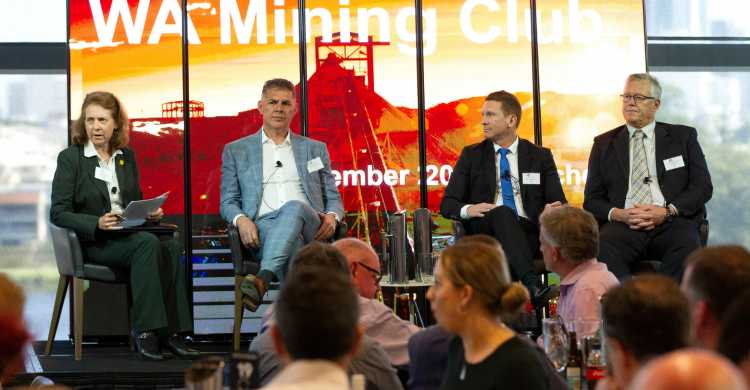 Liontown Resources is moving towards development of its Kathleen Valley lithium project, near Leinster.

Strandline Resources is a mineral sands miner with deposits in Tanzania and the Coburn project, 240km north of Geraldton.

Widgie Nickel is looking to develop its Mt Edwards project 75km south of Kalgoorlie. It recently listed on the ASX with the ticker, WIN.

Mr Graham said the mining sector had let itself down by failing to call out bad behaviour and attitudes to women that had enabled sexual assaults to occur.

He said the industry had learned not to walk past an on-site safety hazard or environmental issue, but “with some of the discrimination and harassment, we’re not calling it out enough on the spot”.

“We’re not stopping work to address that issue,” he said. “I was on site the other day having dinner around a table and some of the conversations I thought were inappropriate.”

Mr Ottaviano said if the industry failed to address issues of sexual assault and harassment it would fail to attract the best talent and “wither on the vine”.

“From Liontown’s perspective we will start day one with this front of mind, to create a safe environment for the people who work for us,” he said.

Asked to comment on the lack of gender diversity in the mining sector, and on the Liontown board, Mr Ottaviano said “it would be addressed”.

“We are very early in our journey,” he said. “We acknowledge where we sit in terms of the gender balance on our board. As we move in size and in development we will address that question, along with my management team and the total workforce that we recruit.”

On recruitment generally, he said establishing a safe workplace was crucial in ensuring women felt comfortable to join the sector and enjoy successful careers.

“We’ve got a lot of foundation work before we can get the result that we all desire,” he said.

Mr Graham said Strandline had appointed its first female director, Alex Atkins, and about 25 per cent of its team were female.

Mr Norregaard said Widgie Nickel had geologist Felicity Repacholi-Muir as a director and that gender diversity was “a barrier that’s getting broken down”.

Mr Ottaviano said it was an “exciting time to be in the lithium industry”.

“It can be a bit overwhelming at times, given how much excitement there is, but I think what my career has taught me…is you have to be disciplined and focus on what you can control,” he said.

“The price is something clearly we can’t control. We like the trend, but we’ve got a fairly well-detailed strategy; we’re executing against that strategy.

“There are about four major objectives that we have in the next six months, that’s to complete the feasibility study, then move into securing our offtake arrangements and funding, then we need to build a team because we’re here to build a company.

“We’re building the company to withstand all the cycles. We focus on our operating costs and on our capital, and we make sure that we have an empowered workforce.

“I’m pretty excited about the opportunity we’ve got in front of us.”

Mr Graham said Strandline had been on a roller coaster journey to get to its current position of being in construction with a line of sight on production.

“It’s been quite a struggle from time to time, but it’s also been really rewarding,” he said.

“The project was discovered in 2000. I joined four years ago and at the time the company had four people — I think I was number five.

“Now we are fully funded into production.  We have a lot more than four people and more joining us and our market capitalisation is over 25 times what it was when I started and (we’re) moving into development on what I consider to be a tier one asset in mineral sands terms in our own backyard.

“The market is buzzing for us, so it’s pulled our project forward. We’ve pre-sold all our offtake for the first five years of production to some of the biggest global consumers around the world.”

Mr Norregaard said the company was a “well-funded explorer with production aspirations”.

“The Mt Edwards nickel project already has a very substantial 160,000 tons of contained nickel. So, the significant portion of the money that we’ve raised (since listing) will be going towards getting those resources into a higher level of geological confidence and pushing through our mining studies with the target of seeing us production ready by the end of 2023.

“The project itself is a great portfolio some 240km2 of mining tenements, perfectly located, we’re only 40km away from BHP’s Kambalda nickel concentrator, who we look forward to doing business within the foreseeable future.

“The outlook for nickel is very positive. I urge you all to have a look at our website and hopefully you can win the Widgie.”

Mr Ottaviano said Liontown was “feeling the headwinds” of costs but the company was well-funded. Given the time between construction and production, he hoped vaccination rates would be high and borders open to allow the company to get the best people for the roles.

Mr Graham was also looking to relaxed border restrictions to ease some of the pressure on the skills shortage.

He said Strandline was looking to increase its workforce from 85 to 300 over the next six months before reducing to around 160 for the operational phase.

“Good projects get good people. We’ve been doing a fair bit in the market to educate the workers on the opportunity at Strandline. They are (looking) to be with projects that have meaning, and we’ve got a really good story to tell and a value proposition for the workers.”

Mr Norregaard said employees would join projects where they could see career paths.

“They don’t want to work in risky situations, so if you value your employees and have a more consultative cooperative workplace, you will succeed,” he said.

Mr Ottaviano said the Liontown board recently went to site and sat down with the Traditional Owners.

“They gave us an induction on how to walk the land. That was very symbolic. It was important for the board to understand how the Traditional Owners of this land think and work and what they value so that we can be totally aligned with it,” he said.

“We have some more work to do before we finalise our agreement, but we’re in very good standing.”

“They don’t believe there is a consultation process, that their sacred sites can be protected,” he said.

“As an industry, we need to recognise the rights and acknowledge that there are sacred sites that should be protected, irrespective of the underlying wealth that may be forgone as a result.”

Mr Graham said Strandline had mapped out an Indigenous engagement strategy which set objectives beyond those already stated in heritage and mining agreements.

He acknowledged that a lack of trust existed and that as an industry the mining sector had “talked the talk but failed to walk the walk”.

“(But) it’s the right thing to do anyway so regardless of the financing element we would be pursuing this agenda,” he said.

“Our project will have a fair degree of renewable power, greater than 50 per cent. We will be building in current technology which helps us reduce our scope one and two emissions.

“There’s a tremendous amount of value of getting this right from the beginning. We don’t have to deal with legacy, we will create our own legacy, and it will be the right one. We’ve got a clear plan for the next 10 years as to what we need to do and where we need to invest to reduce our carbon footprint to the lowest that we possibly can with the technology we’ve got.”

Mr Norregaard: “Whenever you graduate, that’s probably the beginning of the learning process. Don’t be frightened to get your hands dirty and listen to what everyone has to say because everyone’s got something to contribute and eventually you will take a little bit from every learning experience you’ve had so don’t be afraid to ask questions and do what you’re told to start with.”

Mr Graham: “You have a lot of different options at different points in time. For me, and it’s helped me really well in my career, is you always go with your gut.”

Mr Ottaviano: “Big is not always best. There is a lot of good experience you can get working in the smaller end of town. And secondly, a career in purely technical is not a pathway to poverty. There is a good career to be made by knowing your stuff and being very good technically. Financial benefits will come with time. If we don’t nurture (technical specialists) they’ll be a dying breed. Everyone will become generalists. We don’t want that.”