Member of the Month – Vaughan Cranswick 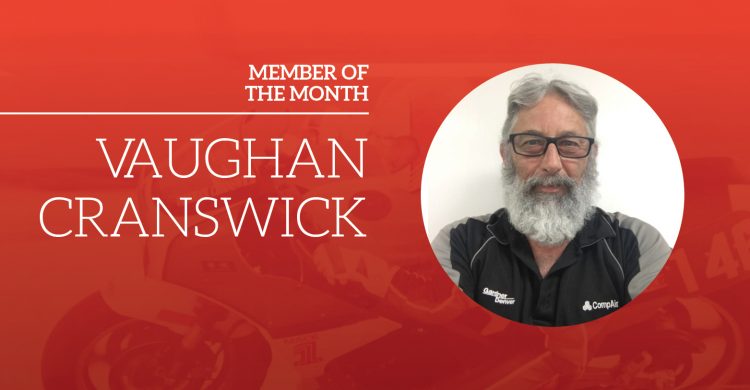 Member of the Month – Vaughan Cranswick

After six years at the RNZAF, during which he became fully qualified, Vaughan travelled overseas to road-race motorcycles.

“I didn’t become world champion, although not through lack of trying, and after two years my savings/earnings/winnings dwindled to a point where I needed to return home and find a real job,” Vaughan said. “I only got as far as Perth, where I scored a job as an ROV (Remote Operated Vehicle) pilot on the North West Shelf and North Rankin A platform.”

In 1994, after nine years of working as a FIFO ROV pilot, Vaughan began his journey in the mining industry as a field engineer at Bridgestone Earthmover Tyres.

“I was bitten with ‘red dust lust’ in the Pilbara and was hooked on mining,” he said.

As a field engineer, Vaughan provided technical consultation to mining and earth-moving companies, collecting and evaluating data to assist with the recommendation of tyres to suit site conditions.

It was at Weir where Vaughan met Steve Williams, his most memorable boss.

From Weir, Vaughan joined Melco Conveyors as the WA Projects Manager, where he stayed until the mining boom crashed.

For the past five years, Vaughan has been the regional manager for WA at Gardner Denver Industrials Group, one of the oldest, leading providers of air compression and vacuum products, where he is responsible for customer relationships within the region by leading sales and service teams.

Vaughan has been a member of the WA Mining Club since 2003.

“I like the diverse range of interesting and talented people from the mining industry and associated businesses networking together all for a common goal,” he said.

Vaughan said the most interesting thing he has been involved in during his time in the sector was “new technologies: driverless equipment and recently the use of drones. Watch this space.”.

The most exotic location mining has taken him is Sanya, the southernmost city on Hainan Island.

Vaughan said he wears his work boots generally two to three days a week when in town “and weekends when the lawn needs mowing”.

If he wasn’t involved in the mining industry, Vaughan said he would be retired.

He has retained his passion for motorcycle riding, and during his spare time likes to ride “fast when possible, and cruise in the country”.

He also likes to go boating and fishing on the river.

If he could invite three guests to dinner, the would be: Jonathan Rea, World Superbike champion from 2015-2019; Roger Waters, co-founder of Pink Floyd; and Barrack Obama, former President of the United States. “One thing I would change about the world is, I wish we would stop judging people constantly and choose to love rather than hate. To stop judging people on what they wear, look like, or who they hang out with. I wish we would give every individual the respect that they deserve,” Vaughan said.