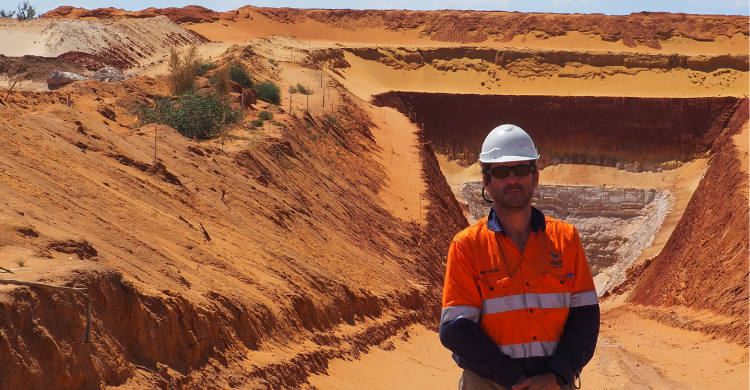 Mike Young’s summary on LinkedIn reads “My goals are to find deposits which aren’t mines and turn them into mines.”

With his career in the mining industry spanning almost four decades, he has travelled all over the world in this pursuit.

Starting off at Queen’s University in Canada, his first summer job was as a geotechnician at the Eldorado Corporation Beaverlodge uranium mine in Saskatchewan.

“I loved it and loved working underground. I considered transferring to mining engineering, but by second year university my vocabulary was too good for that,” Mike said.

Following university, he spent his days venturing outside in snowboots and riding snowmobiles doing electromagnetic ground geophysics in northern Saskatchewan.

His working environment changed drastically when he moved to Australia in 1987, where he had to swap his snow boots for steel blues.

He kicked off his first professional gig at Mining and Resource Technology (later bought by Golder Associates in 2000).  This involved near-mine exploration and resource geology where he was contracted to undertake geological modelling for a range of junior explorers.

“I saw many, many different deposits locally, as well as Asia and South America.”

Mike counts being involved in the first ever 3D model of the CRA Century Zinc deposit as one of the most interesting projects he’s been involved in.

His work with MRT/Golder also took him to the Atacama Desert of Chile, and gave him the opportunity to explore northern Chile, Santiago and Pucon.

The most exotic place visited, according to Mike, was the island of Sumatra during the wet season for the Rawas Gold project (pre-mining).

“The access road was closed so all access was via motorised canoe, the long ones with the long propeller shaft. We spent hours snaking up the river to the camp; it felt like Joseph Conrad’s Heart of Darkness.”

A tribute to his growing love of the junior space saw Young join Cazaly Resources in 2003 as their Exploration Manager. He then went on to become Managing Director of BC Iron in 2006, and together with Chairman Tony Kiernan, took the company through listing, exploration, development and began mining in just over 4 years. He said he still looked to Kiernan as a great mentor, teacher and friend.

After 7 years with BC Iron, he took a break and subsequently joined Vimy Resources where he is managing director and CEO today.

Vimy Resources is a uranium development company whose main focus is the Mulga Rock Project, approximately a  five hour drive east-northeast of Kalgoorlie.

In early 2018 the company lodged a definitive feasibility study, and the project is now in the secondary approvals and permitting phase.

He told WA Mining Club the uranium space is complex to an outsider, with much to learn by the wider community.

“It’s frustrating to read commentary out there by people who have little, or no knowledge of the uranium space; but therein lies the opportunity for shrewd investors.”

These days you’ll find his feet under a desk, on a plane or at a speaking lectern in a pair of RM Williams.

If he were ever to swap careers, Mike says he would be a volcanologist or planetary scientist for NASA.

Today, in his spare time you will find him “riding bikes, fixing bikes, reading about bikes or telling people about bikes.”  In his typical outspoken style, he’s become a passionate advocate encouraging Perth drivers to be kinder to cyclists, and vice versa. He asks that all WA Mining Club members consider that most lycra wearers are good blokes, just like Mike.