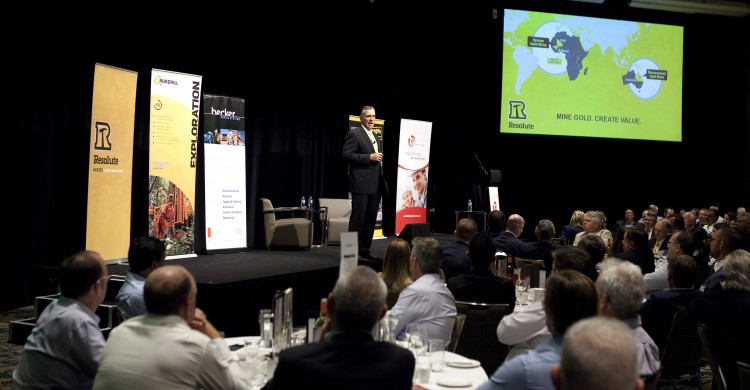 With a CV boasting six international caps for the Wallabies and a distinguished career in global club rugby, John Welborn is not your prototype mining chief executive.

It was fitting, then, that the charismatic Resolute boss gave a typically atypical address to the WA Mining Club’s March luncheon, held at the Hyatt Regency.  Gone were the customary bar and linear graphs of profit forecasts and burgeoning shareholder dividends.  In its place were quotes from Churchill, images of Dennis Lillee and homage to Egyptian pharaoh Tutankhamun’s death mask.

The room was left chuckling as Welborn, 46, joked that US rappers were just some of Resolute’s primary “end users”. But laughter gave way to self-examination as the inaugural Western Force No.4 displayed an image of King Tut’s mask, cast from solid gold more than three millennia ago, and lamented how the industry routinely sold itself short with images of diggers and haul trucks despite the timeless value of the product at their shovel tips. Welborn said gold miners needed to aim for the public and media persona of the diamond and pearling industries, where the focus was on the glamorous end product, not just “blokes in hard hats”.

“When Paspaley try and market their pearls, they don’t show some sort of fisherman with his bum crack out there bending over a rigger up in Broome,” he said. “Paspaley, as we know, use some of the greatest models in the world to promote their products. Think about De Beers and the way they market the diamond industry.”

Welborn’s address often circled back to Resolute’s mission statement – devastatingly effective in its simplicity – “Mine Gold. Create Value”. He said Resolute had a strong reputation for the first part of the statement, laying claim to 7Moz of gold production (and counting) in the past quarter century. Having explored, discovered, acquired, owned, operated and closed nine gold mines over 25 years, including its two current operations – Ravenswood in Queensland and Syami in Mali – it was clear, Welborn said, that Resolute “mined gold really well”.  But the former insolvency practitioner said his focus upon joining Resolute in July 2015 was whether the company had delivered on the tail end of the mission statement.

“Shareholders had provided funds again and again – we were like a teenager continuing to tap the equity capital market whenever we needed money,” Welborn said. “When I started … we had a conversation with our shareholders about the fact that we recognise we exist for them. Rewarding shareholders is our number one driving ambition.”

Welborn said the new focus, which included strengthening the balance sheet, paying down debt and a beefed-up executive team – coupled with a timely lift in the gold price – had resulted in a record profit result in 2016 and Resolute paying its first dividend to shareholders. There was also a commitment to pay 2 per cent of gold linked revenue to shareholders, as a minimum, every year. Shareholders can even take that payment in gold, Welborn said, for those “looking to create their own Tutankhamun mask”.

Welborn touched on re-empowering exploration within Resolute, the challenges of doing business in Africa – including spending $5 million annually for security at Syami – and the positive impact his company had made by hiring and training African workers.