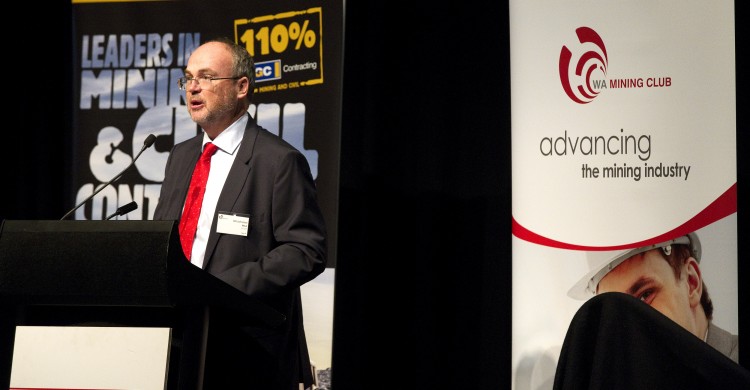 Mr Johnston chose the WA Mining Club’s March luncheon to make his first public remarks as the man in charge of WA’s most economically important sector. The 54-year-old, who served as shadow minister in the portfolio for the previous five years, used the opportunity to paint a glass half full picture for an industry which has had its fair share of dark clouds in recent years.

“There is encouraging news in the Department of Mines and Petroleum’s (DMP) latest update and the long term outlook of the resource sector remains positive,” Minister Johnston told the audience at the Hyatt Regency, referring to DMP’s hot-off-the-press 2016 resources industry statistics document.

The scheme refunds up to 50 per cent of direct drilling costs and aims to stimulate increased private sector resource exploration, leading to new mineral and energy discoveries.

“Without new mines and without new discoveries there is no future for the sector,” Minister Johnston said. “It’s the exploration sector that drives the future of the mining industry … that’s where we should be concentrating.

“In 2016, we had $928 million of investment in exploration in WA. That’s nearly two-thirds of all exploration undertaken in the country … let’s hope we can continue that.”

The new Minister said Premier Mark McGowan was intent on reducing red tape across the board, and there would be a focus on a more streamlined approvals process for DMP.

“We want to create an environment for the resources sector to succeed because your success is more jobs for people in this State,” he said.

Minister Johnston, who is also WA’s first Minister for Asian Engagement, said he wanted Western Australia to become a world-renowned hub for technical expertise in the mining sector.

“Wouldn’t it be great if we were known as the place to come to for solutions to complex problems in the resource industry?” the Minister said. “Supporting businesses in WA in connecting to opportunities outside of WA is going to be a very key part of my role both as Minister for Mines and Asian Engagement.”

Minister Johnston said he intended to be very accessible to industry players during his tenure: “It’s important to keep in touch. I want to keep listening and I want to continue to learn.”

“The Minister has been an avid supporter of the Club over the years, in particular our Scholarships Program which focuses on enhancing the next generation of mining leaders”, she said.

“The Minister has a deep understanding of our industry and the value that we bring to the State and Australia.

“It was a pleasure to hear the Minister’s plans to support the future of mining in the State and we look forward to working closely with him in the coming years.”