Member of the Month – Lara Woodley 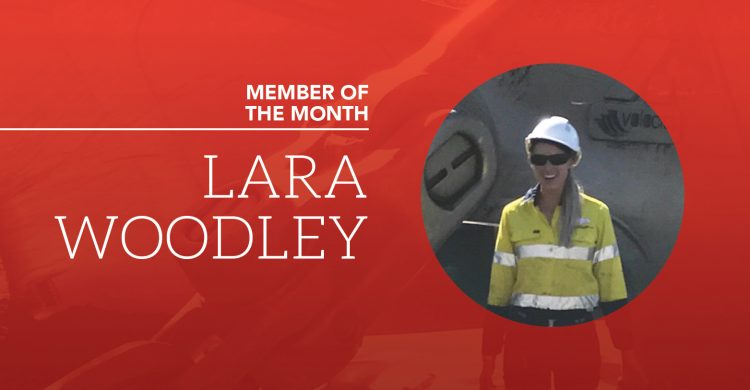 Member of the Month – Lara Woodley

Lara began her journey in the mining industry 12 years ago in a bomb crew with Brandrill when she wanted to save money to go travelling and she knew someone willing to give her a start in mining.

From the bomb crew, Lara moved into density blasting on the Wheatstone project, laying charges in mangroves where she was up to her waist in mud.

After two years, she moved back into drill and blast mining with Action Drill & Blast but didn’t want to stop there.

Lara worked to obtain her shot firer’s ticket and after this became the 2IC shotfirer on her crew.

During her time with Action Drill & Blast, Lara took part in in the Women in Mining WA Menteeship program where she met Alex Atkins, her most memorable boss.

“She helped me realise that I had a career when I thought I had a job and that I had to align my career with my personal values,” Lara said. “As my mentor she has helped me more than she probably knows.”

Lara moved on from being a shotfirer unexpectedly after she contracted the Ross River Virus and became unwell.

“I thought I was going to have to resign, but I was offered a driller’s position instead,” Lara said. “I drilled for a number of years before becoming drill leading hand, running a crew of six rigs.”

After almost a decade as a driller and blaster, Lara joined Australasian Mining Services.

“After nearly 10 years FIFO I wanted to come home, so I started studying an MBA,” she said.

“I went to the Australasian Mining Services Christmas party and was offered a job that night selling drill bits.

“I was a driller… they sold drill bits… I thought it was the perfect opportunity.”

Although starting as a technical representative in the field supporting the product, Lara was promoted to Mining Contracts Manager after 12 months and, three years later, manages the sales teams in WA, QLD and NSW.

Lara said the best part of her job and the company is the people she works with.

“We have a lot of fun while working well as a team,” she said.

Lara has been a member of the WA Mining Club for three years because it “provides a great forum to network with such a diverse crowd, and the food is always amazing as well”.

Outside of work she loves doing projects with wood, and if she was not involved in mining she would be a carpenter.

The most exotic place Lara has been taken to by mining is Moranbah, Queensland, and she said the most interesting thing she has been involved in during her time in the sector was a bit trial in the middle of winter at Rio Tinto’s Kennecott mine in Salt Lake City.

“Standing in snow, in wet work boots, watching the big P&H electric drills was definitely interesting,” she said. “The trial was successful, and we were awarded a three-year contract.”

Outside work, Lara likes to go to her family’s farm in Narembeen on weekends, gardening and playing with her puppy Remi, all while wearing her work boots.

“They’re the comfiest pair of shoes I own.”

Lara’s passions extend to helping others in need, and if there was one thing she could change about the world, it would be homelessness.

“I’ve volunteered at St Barts for the last six years and have seen the large number of homeless people who have sought help,” she said. “But there are more people on the streets than in shelter.

“I would want to help every person to get a roof over their head.”