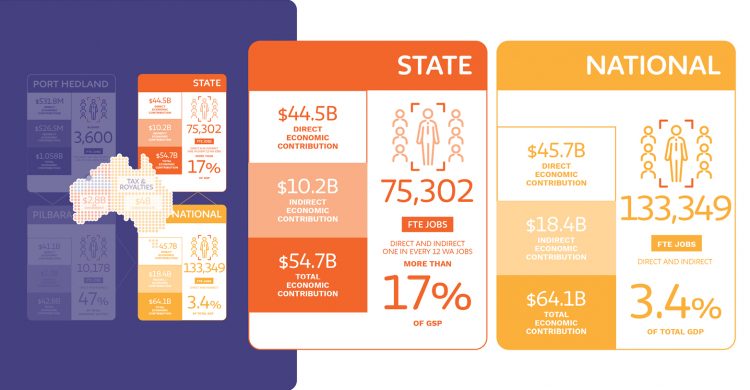 The Port of Port Hedland and its supply chain pumped $54.7 billion into WA’s economy in 2018/19 and supports one in every 12 jobs throughout the State, a major economic assessment commissioned by the Port Hedland Industries Council has revealed.

In Port Hedland, the economic value of the Port and its supply chain is even more significant.

It contributed $1.1 billion to the town of Port Hedland’s economy in 2018-19, creating 3,581 direct and indirect full-time jobs — 44per cent of all jobs in Port Hedland in the year — and paid almost $500 million in wages and salaries to resident workers.

For every full-time job directly employed by the Port and the companies that trade through the Port, a further two full-time jobs are created in other parts of the town’s economy.

The economic benefits of the Port of Port Hedland and its associated supply chain flow beyond the region and WA.

The report said the Port of Port Hedland and the trade facilitated through the Port in 2018/19 boosted Australia’s GDP by more than $64 billion, generated more than 133,000 full time jobs across Australia, and delivered almost $4 billion in taxes to the Federal Government.

The report updates a 2017 economic study of the value of the Port of Port Hedland and its supply chain, expanding the assessment beyond iron ore to include lithium and salt exports and the indirect benefits.

Drawing on future production estimates, the report said the economic benefits would grow over the next 10 years, delivering an extra $26.2 billion to regional, State and national economies by 2028/29, with an average extra benefit of $2.6 billion a year.

An extra $21 billion would be paid to the WA and Federal Governments in taxes and royalties.

PHIC Chief Executive Kirsty Danby said the figures revealed in the report were a powerful reminder of the economic muscle of the Pilbara, the Port of Port Hedland, and the town.

“That the port supply chain is responsible for one in every 12 jobs in WA is extraordinary and a reflection of the importance of the port to the economic futures of the town, the State and the nation,” Ms Danby said.

“Industry is not only contributing directly through taxes, royalties, wages and salaries. It provides vital indirect benefits to a range of contractors and services providers and contributes to the vitality and development of the Port Hedland community through its support for a range of programs.

“The report also reflects the enormous economic potential that will flow based on the production and export targets of a range of industries.”

Town of Port Hedland Commissioner, Hon Fred Riebeling AM JP, welcomed the release of the report and acknowledged the roe the report will play to provide all levels of Government with decision making and insights.

“Particularly in the context of contractions in the broader economy, the release of the PHIC’s report demonstrates how important the port’s operations are to the heart of Australia’s prosperity,” he said.

“Jobs are on the minds of communities across Australia, with port activity potentially providing more opportunities for people to change careers.”

The full report can be found on www.phic-hedland.com.au