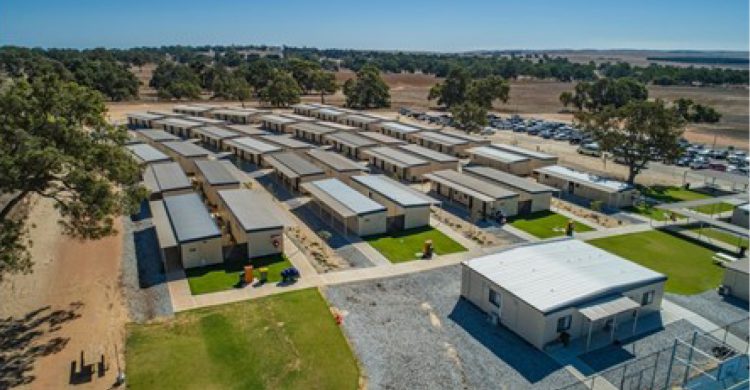 It was in this conversation that Grounded Construction Group project estimator, Courtney Graham stated that with WA’s resources, there is the capacity to build quarantine hubs within a year.

“This is a big project. Pending government and development approvals, we could have this thing up and running in anywhere between eight to 12 months,” he said.

Time is of the essence, given that WA has already experienced two sharp lockdowns this year to control the transmission of COVID-19.

Both outbreaks originated within hotel quarantine before community transmission, prompting the state government to cull the number of quarantine hotels from nine to six and review alternative options.

However, Mr Graham declared these federal facilities as inadequate alternatives.

“Not only do existing quarantine facilities ignore space requirements for proper social distancing, but they are quite segregated and mean couples and families with children will be separated,” he said.

“On the flip side, facilities that should be isolated to prevent interaction with other travellers—toilets, showers and dining areas—are shared at detention centres.”

Given the federal facilities’ shortcomings, the Morrison government has  rejected Mr McGowan’s calls for their use as quarantine facilities.

While another option outside of hotel quarantine has not yet been established, the Grounded group’s proposal for a purpose-built facility would offer a safe alternative.

The proposal for a 1,000-bed quarantine hub would be WA’s first purpose-built facility and provide accommodation for singles, couples and families.

Mr Graham said not only would the quarantine hub be safer than existing hotel quarantine facilities, but travellers would be happier.

“Purpose-built facilities like this are more likely to prevent the spread of COVID-19—or any virus—because they have been built to suit infection control,” he said.

“We have also been able to include design features that existing facilities don’t allow, like verandas and balconies that are attached to each room, so that travellers can get some fresh air and a change of scene.”

The Grounded group are no strangers to building purpose-built facilities.

In 2019, Grounded worked closely with Modular WA to refurbish and purpose build seven dongas to improve the living conditions of WA’s FIFO workforce.

WA Mining Club Young Professionals sent FIFO workers across the state a survey requesting feedback on what they would like to see in their accommodation rooms.

Their recommendations served as the basis for amenities and design aspects included in the seven dongas, with some of the features including better acoustics, ambient lighting, blackout blinds, larger bathroom facilities, storage capacity, better flooring and walls and more energy-efficient rooms.

“By building a quarantine facility that suits infection control, we can mitigate the risk of COVID-positive travellers inadvertently transmitting the virus to other guests or hotel staff, which means the chance of community transmission goes down dramatically,” Mr Graham said.

“This means no snap lockdowns that force businesses to close and ultimately place a dent in WA’s economy.”

While the Premier has all but ruled out building a purpose-built quarantine facility due to associated costs, Grounded’s proposal is an innovative suggestion that will diminish the state’s reliance on hotel quarantine and create a healthier and economically stronger WA.