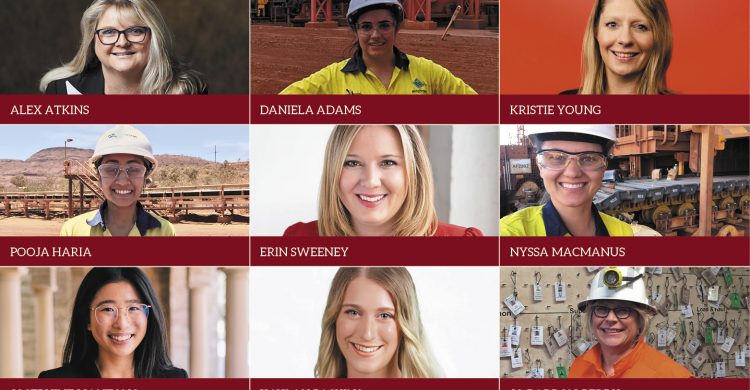 In honour of International Women in Engineering Day, the WA Mining Club celebrates our very own women in engineering.

For Alex, whose career spans over 25 years, it was not the most welcoming of starts to the industry.

“I came out of high school in 1985 straight after the Equal Opportunity Act in WA was enacted,” Alex said.

Having believed that “girls can do what boys can do”, she was shocked to find that she was not encouraged to study mining engineering.

“This is because the stereotype for a mining engineer, who often became mine managers, was a big, burly bloke who can hold his own with big burly miners,” she said.

“I was encouraged by my mine manager, Mark Hine, at Wirralie Gold Mine, to go back to university and get my mining engineering degree.”

Since then, Alex has gained her first-class mine manager’s tickets in WA and Queensland.

“I almost gained my ticket in Tasmania, but they repealed the legislation the day I went to pick up my certificate!” she said.

Jo’s experience was similar, having been one of only four women completing an engineering course in Ballarat in 1987.

“It was the biggest intake ever even though there were 80 males,” she said.

However, Jo wasn’t deterred, having grown up with a father who was a mechanical engineer.

“My father was a mechanical engineer who was involved with project builds and management of power stations so ironically I had been around mining engineering all of my childhood,” she said.

Jo transferred her studies to the WA School of Mines in Kalgoorlie, in 1992, and worked fulltime with Roche Bros at the Super Pit.

For Pooja, who has been a graduate mechanical engineer for more than four years, she was drawn to engineering after undertaking an internship in Weipa, North Queensland, with Rio Tinto.

“This gave me a chance to experience the industry firsthand not only through an engineering perspective, and how mining plays a vital role in building a sustainable future,” she said.

“I wanted to be part of that journey.”

Kristie “fell into” engineering and mining around 25 years ago, when she graduated as a mining engineer.

“It was a little difficult to find out much about mining engineering in pre-internet days,” she said.

“I trusted my instincts and went with it – it was a brilliant decision.

“Since those early days, my career has been extremely diverse.

“From training and selling mining software, working in executive search, lecturing Mine Finance and Economics at Curtin, working in BD at both EY and PwC, and now to Non-Executive Director (NED) and Advisory roles – engineering has been the grounding element across my career.”

Josephine had always been fascinated with the commodity cycle which was sparked by her grandfather who owned a jewellery shop in Indonesia.

“I found the interdependencies and correlations between resource distribution and the stock market really interesting,” she said.

Josephine initially joined the mining industry in 2017 through vacation works, and started her engineering career in earnest six months ago when she started as a Junior Mining Engineer at BHP Nickel West.

Similarly, both Kaylah and Daniela were first involved in the mining industry through vacation work placements, in 2016.

Kaylah started as a vacation mining engineer after receiving a scholarship sponsored by WA Mining Club and Newmont.

She had been drawn to mining engineering as her father worked for a mining company in Queensland.

“I saw the financial benefits and work-life balance that he was able to achieve through working FIFO,” Kaylah said.

Kaylah currently works for BHP as an underground mining engineer with Nickel West.

For Daniela, she had wanted to be in engineering since high school but had no intention of getting into mining.

“The placement I completed at Fortescue was definitely the point at which I knew mining was for me.”
After completing the placement, Daniela stayed on in a site-based role whilst finishing her Chemical Engineering and Chemistry degree.

“Once qualified, I stayed on as a process engineer before a Perth-based process equipment opportunity presented itself at Multotec in 2018.”

Erin joined the mining industry 16 years ago, mainly as a geotechnical engineer, after completing her Masters in Engineering Science, majoring in Mining Geomechanics.

“I was always fascinated with rock mechanics, specifically structure, and the role it played in stability, engineering and optimising designs,” she said.

“In later years, I love understanding that optimisation can be applied to a much bigger picture and how the design, productivity, processing and closure tie together to meet both economic and sustainability goals.”

Nyssa’s journey as an engineer started in the US where she worked as a field engineer for an oil service company before moving to Australia in 2016.

“Mining is such a large industry here, it seemed like the best way to use my skills as a frontline engineer, and I was right!” she said.

For many of the women, it is the dynamic nature of their job that they found most enjoyable.

Daniela expressed that “there’s never a dull moment” on the job.

“The position I’m in requires me to address clients’ problems and needs across a broad range of commodities,” she said.

“I’ve dealt with everything from gold to road-base, capital equipment selection at the feasibility phase to plant upgrades more than 10 years after commissioning.”

Pooja also enjoyed the variability as a reliability engineer.

“I enjoy working with a vast range of stakeholders to improve plant efficiency and reliability, particularly identifying gaps within our existing strategies and reviewing past breakdown data to help provide sustainable, robust strategies,” she said.

The “charming” nature of the underground mining environment and the necessity to think on her feet was what Josephine enjoyed most about her role.

Kaylah enjoys adding to her own personal knowledge and believes mining engineering offers that.

“One of the best aspects of my job I have realised is that every day I can be part of an advancing industry where I am always learning something new and interesting,” she said.

For Alex and Erin, who are respectively in a non-executive director and consulting role, leadership and supporting the next generation was a top priority.

As a Non-Executive Director on mining company boards, Alex believes her life purpose is to make the mining industry better.

“I’m passionate about the digital transformation of mining, ESG (especially safety and risk), and diversity and inclusion,” she said.

“What I do is totally aligned with my life purpose, so I have lots of positive energy, and the risk appetite to take on challenges, as long as I’m surrounded by a top-notch team of people who I trust and respect.”

Erin not only sees her role as a great opportunity to quickly build experience but as a way to provide support to others.

“As a leader in our business, I love that I get to shape and guide the careers of the next generation,” she said.

Kristie enjoys the variety, people, innovation and being able to do her part to make the world a better place.

“We need passionate, interested people to become involved in this essential industry to ensure we have what we need for a sustainable future,” she said.

“The mining industry is essential to our green future – what’s not to love!”

Being on the frontline with a skillset in strategic planning and project management, Jo still gets “tickled pink” with operation readiness activities and new infrastructure installations.

“It is very exciting to see a mine go from nothing to full operation, as well as mine closures,” she said.

“But most of all I enjoy interacting with people from all levels of the business and helping them with safety, regulatory and continuous improvement activities.”

This frontline interaction is also what makes Nyssa’s job so enjoyable.

“The best thing about my job is the ability to work with and help frontline maintenance teams,” she said.

“I am passionate about solving problems with simple, practical solutions and making maintenance tasks easier and safer.”

‘It takes a village’ as people embark on their career journeys, and each of our engineers had people in their lives who helped them the most in their career.

Pooja, Josephine, and Nyssa, all agreed that it was the support from their families that got them to where they are today, particularly getting them through the challenges they have faced.

For Pooja and Nyssa, it was their partners, and for Josephine, her mother.

“They have both empowered me to reach my potential and for that I am very grateful. I am excited for what lies ahead,” she said.

It was Martin Jones that encouraged Jo to recommence her studies in the early days.

“I had gone back out into the industry to work in 1994, as a pit technician, and while in Southern Cross I was planning to walk away from my studies and he encouraged me to finish my degree,” she said.

Erin had a string of mentors and coaches that have helped her along the way including David Lucas, who mentored her as an engineer; Mark Adams and Mark Albertson, senior managers at Century Mine; Gabriela Love, a “supportive mentor, friend, and champion”; and John Banning, who coached her through transitioning to become a manager.

“What all these people have in common is that they are honest and provide crucial feedback, even when it’s not good, and encourage you to take leaps out of your comfort zone and they helped me find my own style,” she said.

For Alex, those who she thought would be her biggest hurdle were in fact one of her biggest supporters.

“It’s funny because in the early part of my career I felt my peers – mining engineers – were my biggest handbrake and yet, at this stage of my life, my opportunities have mainly come from them!” she said.

Alex was particularly grateful to Mark Hine, Bruce McFadzean and the team at Strandline Resources for the opportunity to work with them at the board level, as well her company’s mining clients.

“What gives me the greatest sense of joy is that by persevering I have earned the support of great mining men who I respect and admire, while at the same time remaining true to my personal values and being able to be a dedicated mum to my two kids (thanks are also due to my parents for their support when the kids were little).”

Other female non-executive directors in Perth have given Alex confidence through their support and engagement including Fiona Harris, Andrea Hall, Diane Smith-Gander, Denise Goldsworthy, Sharon Warburton, and Erica Smyth.

Kaylah found the importance of having senior work colleagues as well as structured mentoring programs to help with her career decisions, whereas Kristie believes that “we all need to own our career.”

Kristie urged others to remember to believe and trust in themselves.

“Surround yourself with respectful individuals who will tell you how it is, rather than sugar-coating things or giving advice with selfish intentions,” she said.