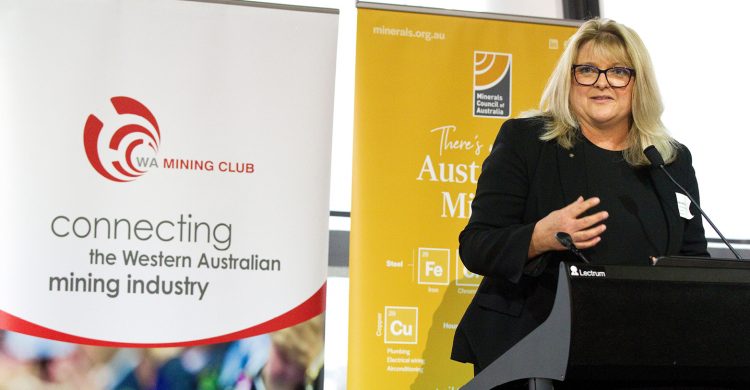 Alex Atkins has enjoyed a life well-travelled — from the underground mines of Papua New Guinea to the iron ore mines of the Pilbara and the gold shafts of Kalgoorlie before they were swallowed by the super pit.

Along the way she confounded critics, established professional firsts, and fell in love with mining.

She is managing director of Alex Atkins & Associates, a mining risk consultancy, holds two Bachelor of Engineering Degrees and an MBA (Finance), is a Graduate Member of the Australian Institute of Company Directors and is a Chartered Professional Fellow of AusIMM and Engineers Australia.

She was one of 2018’s 100 Global Inspirational Women in Mining (WIMUK) and was inducted into the Western Australian Women’s Hall of Fame in 2019.

As she told the WA Mining Club’s St Barbara’s Day lunch, hers was a story of persistence and resilience, touched by tragedy in years when fatalities in the mining industry were far greater than they are today.

“Mine is a story of pushing boundaries and exploring ways to get out of the grinder level, which is where most mining STEM women get stuck,” Ms Atkins said.

She worked underground in Kalgoorlie when it was illegal for women to do so, and was the first female mining engineer to work underground at Porgera, in Papua New Guinea.

“I was illegal and taboo,” she said. “Women are still not legally permitted to work underground in Papua New Guinea to this day.”

And then there were jobs in mining camps before there were toilets or showers for women, and when women more likely to be seen in pictures, naked, plastered on the crib-room walls.

“That was not nice while you were eating,” she said.

“I was in the first and only wave of women who did their mining time on airlegs.

“At the end of my underground time I asked my foreman for a referee letter for my first-class ticket application. He wrote in it, that I changed his mind about women working as miners underground. That meant the world to me.”

The firsts continued when she was appointed the first female WA District Inspector of Mines.

“Most of my career has been spent being told no, ‘you can’t do that’, then going ahead and doing it,” she said.

“I like to break rules that make no sense, push the limits, and make the impossible possible.

“Nothing about my career, or my life is about comfort. This means periods of great financial hardship, working on and off in the gig economy, which is the casualisation of the workforce people have been complaining about since coronavirus it. I’ve been doing that since 2013.

“When you’re not an incumbent, you have to fight and become a creative disrupter to survive. You get used to ambiguity and uncertainty. You unlearn and relearn, applying startup thinking to create the business model of you, to apply your strengths and values to serve gaps in the market. It’s all very humbling and there’s no entitlement here.”

Ms Atkins said there still not enough women in leadership positions in mining.

“Mining STEM women have committed to the mining sector and can’t easily sector switch,” she said. “So, it’s cruel not to retain and develop these women.  It has become a part of my life purpose to see this change for the better, because I think it will actually make the mining industry better.”

Just as mining has provided her with a rich and diverse professional career, it also “gave me the courage to leave an untenable situation” when in 2008 she became a single mother to two young children and left Queensland to return to WA.

“I left everything I worked really hard for behind me, arriving on my parents’ doorstep with two kids, two dogs, two bags and a Corolla. I had left home when I was 17; I’d been away 20 years,” she said.

“At this point AMC consultants took me in back into the mining family after a short motherhood career.

“They were my lifeline because not only did they help me return to my industry but having a job to come to gave me the courage to leave.”

Asked after her presentation what advice she had for young women, she said: “Surround yourself with wonderful people whose values are the same as your values.

“Make sure you know what your values are and over time what your strengths are.

“Don’t make it about you, make it about making your country better or your industry better. That way you will be able to get through the tough times.”