Member of the Month – Kevin West 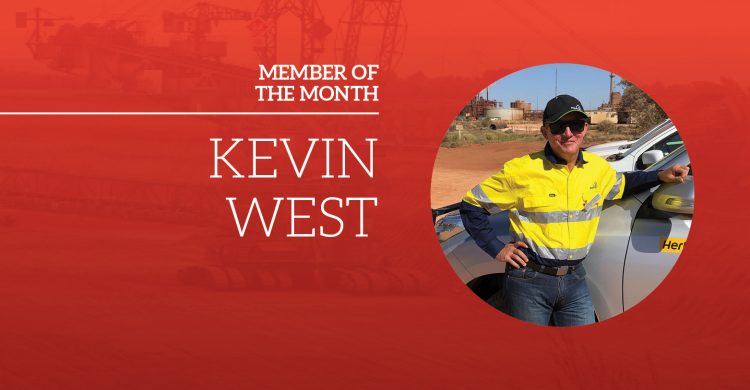 Member of the Month – Kevin West

After studying as an auditor in financial accounting and moving into banking, Kevin West’s 10-year journey in mining began when he started working in a global software company that wrote equipment maintenance and business operations software for an array of industries.

“I was fortunate to be part of a team that started the West Australian arm of the business and we decided on targeting the mining industry and related industries,” he said.

It was from this that Kevin’s relationship with several companies related to mining and construction began, including a company acquired by BHP, which exposed him to the requirements of mining contractors.

“Through this experience I was able to relate more to miners from an operational perspective, specifically around their need for people and assets in the resource extraction process,” Kevin said.

“More recently I have been employed by a software company specifically targeting mining operations.”

Maptek has been involved in mining for nearly 40 years and was among the first to introduce 3D CAD as a tool in mining, as well as point cloud data and purpose-built mine scanners.

Kevin’s new role is focused primarily on resource estimation, mine planning, and how technology can assist clients with maximising their assets and value.

“This is typically achieved using new technologies that include machine learning, artificial intelligence and heuristic modelling techniques to help miners and mining contractors to work smarter, not harder,” he said.

“This (role) has allowed me to strengthen my knowledge of the industry, which my membership at the WA Mining Club is helping to reinforce.”

Kevin has been a member of the WA Mining Club for more than seven years.

“I enjoy the Mining Club because it includes the miners, the explorers and METS companies in a relaxed, offsite environment. It allows for easy engagement for similarly minded people and the ability to grow a network of peers,” he said.

Kevin has been fortunate to have had memorable bosses during his career as he worked “with them, not for them”.

“Both of them are practitioners of ‘servant lead’ leadership styles,” he said.

“Servant leaders share power, put the needs of the employees first and help people to develop and perform as highly as possible.”

Kevin last wore his work boots in late August after flying to a customer mine site east of Kalgoorlie.

“It was an amazing experience to be able to put on the high-viz, work boots and be in a plane after being grounded and at home for several months,” he said.

The little town of Laverton, north of Kalgoorlie, was, although not exotic, a memorable mining location for Kevin.

If he was not involved in mining, Kevin would be helping businesses improve their business processes.

“It took me a while to realise the auditor hiding within me and the drive to continually improve,” he said.

In his spare time, Kevin enjoys spending time with his wife Lisa and four children, particularly travelling and cruising, as well as walking.

If Kevin could invite three guests to dinner, two would be his parents Colin and Pat West, who sadly both passed away before their time, as he has many questions that still need answers.

“Thirdly, I would invite Saul of Taurus, otherwise known as Saint Paul, (as) I would love to listen, learn, and hopefully emulate some of his achievements,” he said.

If Kevin could change one thing in the world, he would ban self-importance.

“If we did more things for others and less for ourselves, I definitely think the world would be a far better and safer place,” he said.