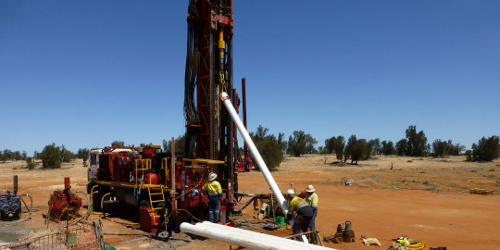 The Lake Wells potash project consists of a 2000 square kilometre tenement package made up of 100 per cent-owned granted exploration licences, and licenses over which Australian Potash holds rights to all potash minerals.

The recent Scoping Study confirmed both technical and economic aspects of the Lake Wells project to be strong and viable.

The Study determined the project has potential to take Australian Potash from its current explorer moniker through to being a long-life, low capital and high margin sulphate of potash (SOP) producer.

In conjunction with the Scoping Study, APC upgraded the Lake Wells JORC 2012-compliant Mineral Resource Estimate to 14.7 million tonnes of SOP, including 12.7 million tonnes sitting in the Indicated category.

The Study also outlined life of mine extension opportunities with inclusion of the Eastern Zone (4.6 million tonnes SOP Indicated).

An on-site, pilot evaporation pond program has commenced to produce the first sample of SOP from the project.

Construction of the evaporation pond was finished in June 2017 with the program to operate for a minimum of six months.

The test-work from the bulk samples of potash salts from the pilot evaporation pond program will be used to further optimise process design.

“We are finalising those while we carry out some optimisation work.

“Resource-wise, we identified the palaeovalley, which is effectively an old river system that has filled up with sediments over time.

“The hyper-saline environment of the Goldfields has effectively formed – what could be described as – a tank full of brine containing potassium.

“That palaeo-valley under our deposit goes to around 175 metres deep with substantial upper and basal sand layers, from where we will be able to extract brine.”

The optimisation work underway includes recently-conducted laboratory based test-work that confirmed the validity of the conversion process of Muriate of Potash (MOP) to SOP that APC proposes to implement at Lake Wells.

Unlike the Mannheim process, this natural, low-energy process can increase output from the project by up to 50 per cent.

The main differences between the conversion process APC intends using compared to the Mannheim process are it happens at low temperature and will not create additional reagent expense associated with purchasing sulphuric acid, as sulphate is already present.

The company considers the economic case for developing this conversion facility to be compelling considering the low marginal operating costs associated with producing an additional 50,000 to 100,000 tonnes of SOP from essentially the same plant.

APC is working to de-risk the three essential components of a brine SOP operation, being brine extraction, brine evaporation and salt processing and is about to commence a Stage 2 test-pumping program that will add to the plus-20 million litres of test-pumping already conducted. 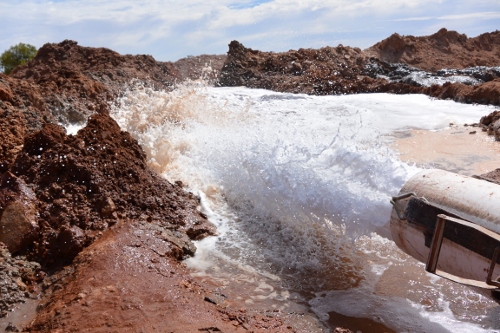 This test-pumping program will feed into the brine flow model for brine extraction, building on decades of understanding and operation of brine bore fields in WA.

“We are now aiming to kick into a Feasibility Study, for financing purposes, during the second half of this year that should be ready for reporting in the first half of next year,” Triner said.

“As we move into a Feasibility Study – obviously there is the technical side of the project to consider, but we also need to have a market for our material, which is where the recent MoUs regarding offtakes come into play.”

A valuable lesson junior Resource companies learnt in recent times is that financiers can be reluctant to fund an operation that doesn’t have customers for its product.

To that end, APC placed a healthy chunk of its corporate puzzle in place by demonstrating to the right people the company does have potential customers interested in its product.

Australian Potash signed of a non-binding Memorandum of Understanding (MoU) for the supply of SOP to one of China’s largest fertiliser companies after striking a deal with Sino-Agri Holding Company Limited, a subsidiary of CNAMPGC Holding Limited Corporation.

The MoU portends potential high-level commercial terms for sales volumes of up to 30 per cent of estimated production – up to 100,000 tonnes per annum of SOP – from Stage 2 of the Lake Wells project.

“That was based on getting funding for the first half, and then funding the second half through cash flow.

“Although it is still non-binding at this stage, the signing of a 100,000 tonnes per annum offtake MoU is an extremely important component of the project’s first 150,000 tonnes of production.

“We have been developing our relationships within the Chinese potash and fertiliser industries for some time and it is encouraging that we are now seeing the results in the form of a formal pathway to securing customers in the world’s largest fertiliser market.”

Australian Potash has a great deal of activity planned for Lake wells, including the commissioning of pilot evaporation ponds, completion of the Stage 2 test-pumping program, installation of Stage 2 test-production bores, continuing Resource upgrade and expansion program, and commencement of the Feasibility Study.

“We have made some rapid advancements with the release of the Scoping Study and we are now very confident the project is viable and should go ahead, which we have demonstrated to the market with the imminent commencement of our Feasibility Study,” Triner said.

“Although we haven’t quite kicked-off the FS at this stage, we are very busy finalising that work-optimisation phase on the back of the Scoping Study.

“The Scoping Study presented a few options we need to look at and we are just assessing those to finalise the fixed-scope of the Feasibility Study, which we anticipate will be underway by Q3 this year.”

Miner of the month courtesy of Resources Roadhouse