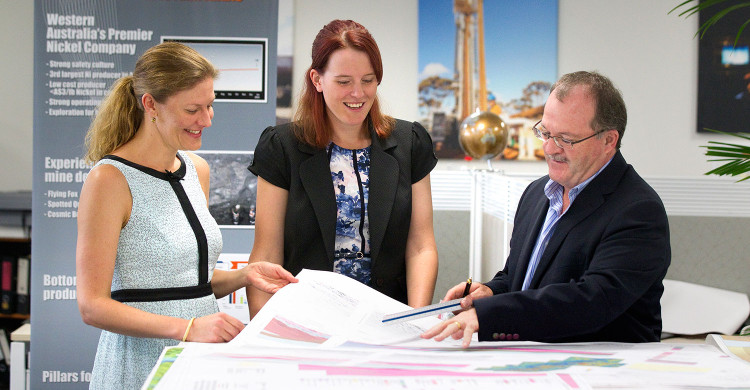 A high dropout rate among students enrolled in mining-based courses means that some of Western Australia’s brightest minds never make it into the mining industry.

The Minerals Tertiary Education Council Key Performance Measures Report 2013 highlights this trend in key areas of study such as Metallurgy which has a continuing high attrition rate (up 34% from 2012 to 2013), as well as high numbers of Mining Engineering students failing to complete their course.

The program offers six scholarships, each worth $10,000, to exceptional students demonstrating commitment to the mining industry through their studies in geology, environmental science, engineering and metallurgy at the University of Western Australia, Murdoch University, Curtin University and the WA School of Mines.

The WAMC is launching its inaugural Indigenous Student in Environmental Sciences or a Technical Discipline in the Mining Sector Scholarship co-sponsored by ICRG. Other sponsors of this year’s scholarship program include METS, BC Iron and Western Areas.

According to WAMC President Neil Watson, the scholarship program is the most recognised and highly sought after mining education incentive in WA.

“The scholarships are awarded to the brightest and most engaged students, who are on track to be the future leaders for the mining industry,” Mr Watson said.

“Our members and partners see the value of sponsoring the WAMC Scholarship Program, as an investment our industry’s future and to align themselves with these bright young stars.”

Damian Connelly, of scholarship co-sponsor METS, said mining companies had much to gain from investing in the next generation of industry professionals. He said that the ebb and flow of the mining industry and demands of mining-based courses could make them unappealing to prospective students. This often resulted in skills shortages in boom times, Mr Connelly said.

“The scholarship is very important because the life of a student is tough and they have to make ends meet,” he said.

“That bit of money to help them get through makes a big difference.”

“There’s no doubt that people start university studying in mining disciplines, reassess and then change courses.”

“Companies have a vested interest in investing in these students. It also provides them with an opportunity to meet the most capable and talented students and to build a relationship with them as a prospective employer.”