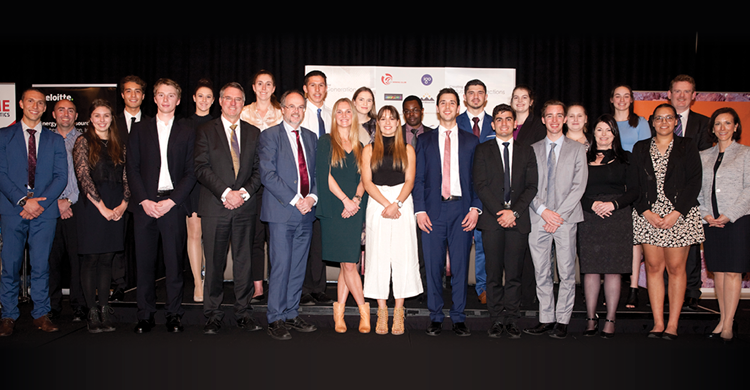 New data from the Minerals Council of Australia based on current enrolments at eight mining universities across the country says that only 50 mining engineers will graduate in four years’ time, well down from approximately 300 that graduated every year during the resource investment boom.

But if you were one of the hundreds of attendees at the Mining Club’s  Scholarship Luncheon in August, you might be scratching your head wondering if they got their numbers correct.

Now in its 16th year, the WA Mining Club’s Scholarship Program put the spotlight on the industry’s next group of leaders, with the announcement of the 2018 winners.

Sixty-five scholarships have been awarded since the program started in 2003, rising from a single scholarship in its first year to an unprecedented nine scholarships for 2019.

The Club’s Scholarship Program Manager, Damian Quail, told the audience, “It’s been a record year. When I started with the program about three years ago we thought 80 applications was a good result. This year, we got 407, so a five-fold increase in three years. That’s an absolutely magnificent result.”

Each winner will receive a $10,000 grant. They’ll also benefit from a formal mentoring program, career support, and increased visibility within the industry with a WA Mining Club membership and vacation work opportunities.

Juliette Kuiper, who won the Environmental Sciences Scholarship, was ecstatic to be among the winners. “The program is not just a sum of money (which is already really helpful) but opens a whole new world, with contacts, opportunities, and an extremely bright future.”

Juliette says she’ll use some of the funds to get involved in an environmental engineering project in India early next year.

Once again, the contribution from mining companies has been outstanding. This year’s sponsors include Western Areas, who have been supporters for nine years running; Mt Gibson Iron; Sandfire Resources; BGC Contracting; Newmont Australia, Pilbara Minerals; and IGO.

Many finalists and winners from previous years have gone on to work for the company that sponsored their scholarship.

“Investing in this program really does get early access to some of the brightest and best students in WA for sponsors. So if you’re thinking about sponsoring it, that is one real benefit you can get from it,” Quail said.

The nine winners of the WA Mining Club Scholarships for 2019 are: