Event - Africa Down Under

Now in its 15th year, the Africa Down Under (ADU) Conference was created to raise awareness of Australia’s interests in African mining and energy. Over that period, the conference has grown into the largest African mining-focused event outside of the continent itself, and its importance continues to be reflected in the number of high profile attendees we have welcomed to Australia’s mining capital over the years.

There has been a surge in the growth rates of nearly all African countries, largely driven by the unparalleled demand for commodities from China. This ancient land mass of Africa is without question the world’s greatest treasure trove – and has yet to be comprehensively explored using modern techniques.

The positive, changing face of the African continent is beginning to see resurgence in the global resources sector following a difficult four-year period. Interest in Africa’s mineral potential is also beginning to return among investors. There has undoubtedly been a positive sentiment and growing confidence in the future of the resources sector in Africa, and indeed, in Africa-Australia relations.

In order to capture the complexities of African mining issues, the ADU Programme will feature in-depth discussions involving experts in the fields of security on the continent, infrastructure and project financing; and provide a vibrant, inclusive forum for discussion, networking and doing deals, while raising awareness of the resources opportunities on offer throughout Africa.

A pillar of ADU’s success has been the continued strong support of African governments and Australian government representatives. ADU has become a must attend event for government delegations and senior ranking officials looking to enhance their respective sectors through high level interactions with key players responsible for driving development of the mining sector across Africa.

The action across the continent is taking place hard and fast there could not be a better time to explore the options and hear the stories from the people who are unlocking the wealth of this great continent. Do not miss the opportunity to be a part of this significant milestone as we mark 15 years of Africa Down Under! 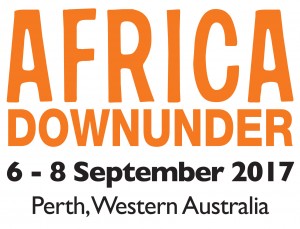