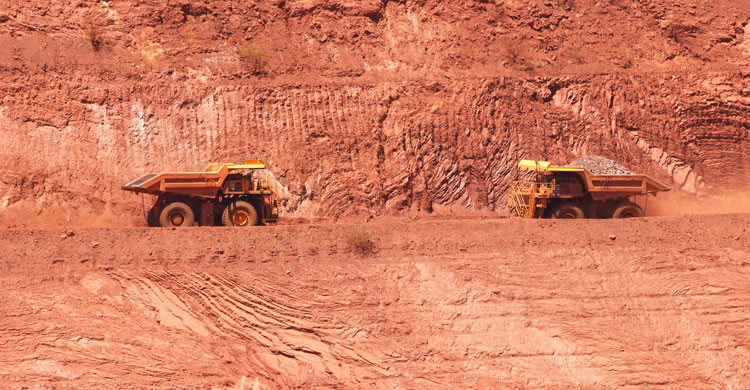 Iron ore mining projects are again in the spotlight with an Engineering Procurement and Construction (EPC) contract recently awarded while studies progress for a $55m iron ore prospect.

Under the contract, Sedgman will perform civil, structural, mechanical, piping, electrical and commissioning works and install a new primary crusher, as well as additional conveyor capacity at the mine located in the Pilbara region.

In April 2014, BHP Billiton officially opened the Jimblebar iron ore mine 40km east of Newman in the Pilbara region. Initial production from the mine was delivered in the quarter ending September 2013.

The mine has the capacity to produce 14 million tonnes of iron ore a year through a two-stage crushing circuit.

In another iron ore development, Red Hill Iron is progressing a Definitive Feasibility Study (DFS) into its Pannawonica Project.

The study envisages trucking 4 million tonnes of product per year some 123 km to a new port to be established at Cape Preston East for a mining period of eight years.

Red Hill Iron project manager Doug Stewart advised Projectory that the study is underway and the company was waiting for completion before taking further action on the project.

“We are in a holding pattern now pending ongoing feasibility work,” he said.

The Pre Feasibility Study (PFS) found the grade of iron ore is lower than most such ores currently being mined in the Pilbara, but that the reserves have the benefit of being dry with a water table well below the planned base of mining, and the life-of-mine stripping ratio is low at 1.4:1. The Ore Reserve has relatively high levels of alumina and silica but the phosphorous level and the level of the other deleterious minerals are low.

The project would require a capital investment of about $55m, with the life-of-mine operating cash costs estimated at $46/t free-on-board.

The PFS identified the preferred mining, processing and infrastructure requirements at Pannawonica, and has proposed that a simple direct shipping ore operation, with milling to be carried out using continuous mining equipment atop dry mesas.

In other recent and significant mining project developments in WA, Cameco has released a Public Environmental Review (PER) into the Yeelirrie uranium mine.

The PER found the project would create 225 jobs, which Cameco claims would be mostly local employment.

Development of Yeelirrie, 70km south of Wiluna (site of another uranium project), would also create 1200 construction jobs for the build of processing plant and associated infrastructure.

Projectory understands it is too early to express interest in participating in the project.

The resulting open cut mine would measure 9km long by 1.5 km wide, although excavation would only go to 10m deep.

The uranium ore is contained in calcrete which occurs below the water table, meaning the first eight mining blocks (of 15) will require dewatering a year ahead of the mining face.

Cameco bought Yeelirrie from BHPB in 2012 for an investment of $US452 million, and has since been reviewing over 10,000 historical and recent drill holes by BHP and the former project owner Western Mining Corporation.

With an expected mine life of 22 years, mining will have to start two years before milling can commence.

Plans for rehabilitation include progressive backfilling of the pit, with tailings to be stored in two ponds throughout the life of the mine, so that no open void remains at the time of site closure.

Mining of the ore will occur for 16 years, while the final four years of mine life have been set aside for decommissioning and rehabilitation.

Public consultation for the PER will be open until December 2015.

Cameco is also the proponent of the Kintyre uranium project.