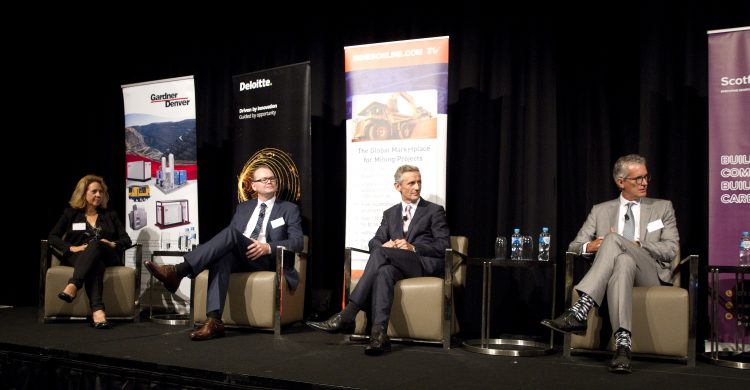 Despite global uncertainty due to the trade war, Brexit and slowing Chinese growth, the consensus amongst the panel was that the 2019 market would be reasonably bullish.

Parker said traditionally markets are pessimistic and love to react to any level of uncertainty.

“The Royal Commission was a classic, where you saw all the banking and financial services stocks getting sold off really quite dramatically before and those big cap stocks bounced 7% in a day, so things can turn very quickly,” Parker said.

“The key in the short term is the trade war. Is there going to be a resolution there. But that’s all very short term. But the macro theme for mining is very positive.”

The trend of investors pursuing brownfield rather than grassroots and exploration projects is expected to continue throughout 2019.

“There’s a high degree of confidence where you invest around an existing mine – as distinct to an exploration play where there is absolute risk and you can lose your share,” Twigger said.

Managing director of Doray Minerals, Leigh Junk said the company had only been able to undertake a capital raise almost 12 months ago because the company had invested time in building its relationship with investors and creating trust in their strategy and operational capability.

“We had to get some credibility with potential investors and that takes time – we didn’t try to pitch,” Junk said.

“We went back to them 3-4 times to ensure our relationship was established and our vision was well understood.”

The strategic decision resulted in a $25M capital raise, placed at $0.28 with a four-day turnaround.

Twigger said streams were also a trend that were supporting brownfield rather than grassroots projects.

“The stream is an upfront payment for a percentage of production at a pre-determined price. The cost of that is around 20%… they can see a gap as the equity isn’t there all the time and they’re looking to fill it.”

Twigger said Australia continued to attract overseas parties, with some of the TSX majors looking to list on the ASX, but the mining industry is now competing with the likes of the cannabis industry and Crypto currency.

“The top 20 cannabis companies in Canada are valued at 56 billion and they’re up 700% over the last three years. You can imagine the impact on investors of getting behind a cannabis company and making 700%,” Twigger told the audience.

“Investors in bitcoins aren’t necessarily the demographic that would buy shares and get behind buying mining stocks but I take heart from the cannabis market that these guys have made so much money and they must have the same risk appetite to invest in mining stock in the future.”

However, ever the optimist, Twigger said a catalyst was needed to switch these investors across to the mining industry and we need to play to our strengths.

Along with global headwinds still affecting the market outlook for 2019, Ivory said there had been a rise of interest in how companies run outside of their operating performance, with social licence highlighted as an issue the industry needs to work on.

While mining does lead the charge with environment and social management, Ivory said society expects a lot more of corporates now than historically.

Ivory said the mining industry needs to continue to take stakeholder engagement seriously by communicating and reporting to shareholders on its social licence.

“It’s never been an exercise of ticking the box for approvals.”

She said a further trend was technology aiding our global competitive advantage and talent pipeline.

With technology developing at a rapid rate Ivory said mining would also be competing with the likes of Google and Apple in talent acquisition and needed to work on its branding in order to attract the right people for its jobs.

“If we are going to embrace a lot of digitisation we are going to need, in our workforce, people with a different skillset to what we’ve historically had in mining,” Ivory said.

“This links back to social licence. We really need to tell our story better, we need to be out there working on our reputation to attract the brightest minds to our industry.”