Miners on the Move 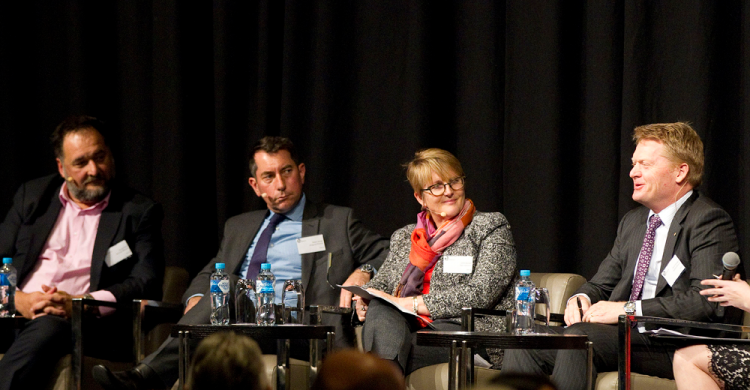 Miners on the Move

Free electricity, skills shortages, working together and the need to educate investor and financiers about new products emerged as the key themes from the June Miners on the Move Luncheon at the Hyatt Hotel.

“I think we can say we are well and truly past the green shoots stage, but I think we are constrained by a lack of rigs, lack of ground crews – we are really starting to be constrained by human resources,” Linda said.

“We have also found that a compared to couple of years ago there are more groups that are looking at having a higher risk part in their portfolios – having some exploration in greenfields areas – so they are getting back on board.”

The panel also discussed changing markets – both in demand for minerals, and the way finance markets behaving at this stage of the cycle, and responding to “new” commodities.

Rob Waugh: “It’s a slower burn now – we are definitely seeing improved markets, but we are seeing shorter term windows for that are open for the capital side of things.”

David Flanagan said there was a shift from Australian bankers to offshore debt providers underway. “The Aussie big banks are making plenty of money doing the business they are currently doing. During the downturn it feels as though the big Aussie banks lost a lot of their IP around resources, to properly assess opportunity and risk in a timely manner. So we’re finding that when it comes to banking projects we are going offshore.”

George Bauk outlined the challenge growing demand for products such as rare earths presented financiers and investors. “One of the problems we have in the critical metals space is that its an opaque market, so the traditional debt lenders aren’t there. The credit sections in the banks can’t get their heads around it, so we are left to the equity markets. One of the problems we have in the equities markets is that people come and go based on whatever is the new, exciting thing.”

Linda said that exploration was coming back into vogue. “It’s definitely easier to get a meeting, people definitely want to talk to us more.

There was a lively discussion around the theme of Team WA – what do we do well as an industry, and what should we do better.

The panel pointed out that as an industry, we should drop some of the competitive tension inside WA and support each other more on the global stage.

“I think what we don’t do well – I think don’t support each other as well as we could. We’re all grasping for that moment in the spotlight and we need to bring everybody along,” Linda said.

According to David Flanagan, whose comments drew an enthusiastic response from the crowd, this is a real problem in front of investors. “Some people think it’s kind of cool, when they are going to give their presentations to their fund managers and their brokers, by listing off their peer group and hanging sh*t on them. The brokers just hear a bunch of West Australians coming in and just pouring water on their competitors, and they don’t know who to believe so they just choose to invest somewhere else. Some you should have a good look at yourselves.”

Is it a good time to be mining in WA? All our panellists agreed it was. George Bauk summed it up neatly: “This state’s got a wonderful opportunity – basically we’ve got the periodic table in our back yard. We talk about opportunities for our kids and I’ve been to China a lot recently and the Chinese have done a fantastic job of developing new industries and new jobs for their people. We’ve been taught to dig it out of the ground, do first stage processing and ship it off as soon as possible. I think what we need is to go back and go downstream. We need to start leveraging off the wonderful resources we’ve got to get industry coming to Western Australia and build end products here.”

But we need to work on a few things to make sure we succeed in the future, especially when it comes to filling the talent pool needed to sustain the industry.

George Bauk again: “I think we’ve got a wonderful opportunity in this state. We have to educate kids that mining is essential. We can’t make it look like mining is dirty and everyone wears overalls and high vis. It’s an opportunity for everyone from trades, to admin, to people with university degrees. This industry is amazing and we’ve really got to promote the best bits of it.”

Rob Waugh said it starts in primary school, and gave an example of how it can be done: “I was asked to give a brief mining talk last Easter, in primary school, so handed out Easter eggs and told the kids – mining gave you these– and the reality was, they were all wrapped in aluminium. You start early and you teach them, it’s not all negative, there are good elements to mining here!

How should we reach people outside mining to hear our story first?

David Flanagan responded: “I don’t think the answers to the questions for our industry are inside the industry. We’ve got to go outside. And that’s one of the reasons I got involved with Murdoch University, because I could see that by actually engaging with people who weren’t like me, we were going to create opportunity. In our community those people are there, and we should reach out to them.”

On technology, Linda outlined how in her lifetime computing power had revolutionised exploration.

“When I first started off in Telfer to complete an assay run you’d have 10 little HP laptops all set up in a line, and you’d do 200 metres of the strike length of your ore body and you’d leave these computers going overnight to come up with your answer. The next day and you’d collate it by hand.  Now you can do the entire thing in 15 minutes, and you start to create new problems that you can solve with that computing power.

“We’re getting so much information, the risk is that we drown in information, so we have to make sure we effectively use as much of that information as we can.”

Rob added: “3D seismic – integrated form the oil and gas industry – we’ve done well out of that. Things like drilling and surveying and mapping, 3D imaging, on the mining side we’ve got robotics and automation, new bioleach technology getting metals out of old leach pads, which helps the environment as well.  There are lots of new technologies that are incremental, rather than being the panacea.”

Finally, David Flanagan summed up what the purpose of mining is in 2018 and beyond, with minerals enabling rapid changes in renewable electricity.

“What’s the most exciting thing about microgrids and electricity? If we can get electricity into a remote community, they get fresh water, they get clean food. There’s about 1.2 billion people in Africa, about 300m are children, almost none of the girls go to school, because they are hauling water. If you give them fresh water, you suddenly get double the attendance at school because the girls go. We get them electricity we get them educated. We don’t just get markets for our products – it’s actually the right thing to do. And while we do this we can make excellent returns for our shareholders. Right now in Western Australia, I can’t think of anything more important.”