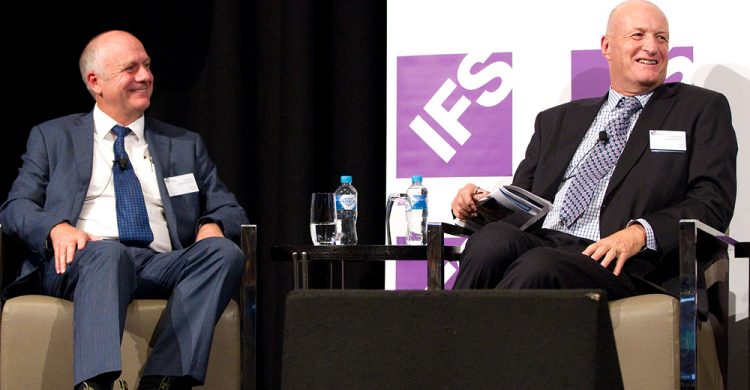 But Gold Road hasn’t always been in the presence of one of the world’s top ten gold miners.

During 2012, Gold Roads Resources set out to make sure that they were using their tenement in the best way possible and in 2013 they hit pay dirt. It only took them another three years to build a feasibility study, which has since become the Gruyere project.

Undertaken in tandem with reaching out to other mining companies, the next step was sourcing project funding exploring both traditional funding models and bank finance options.

“We knew this was a 13-year project, and we only wanted to deal with companies that we knew we could get along in a long-term relationship with,” Managing Director of Gold Road, Ian Murray, said.

At the same time, Gold Fields was looking to increase both their portfolio, and their exploration.

Reminiscing on the project, both Ian and Stuart Mathews, Gold Field’s Executive Vice President of the Australasian region, agreed that the partnership was created quite quickly.

“To take discovery through to first gold in five-and-a-half years is very, very quick.”

“We can’t procrastinate on these things,” explained Mathews when talking about the size and quality of the project.

Like any good relationship, each of the parties brings their own unique abilities to the table. Gold Fields will run the development and operations side, while Gold Road will continue to explore the tenements to extend mine life. So far, they have added 600,000 ounces to the operation from satellite deposits.

The Gruyere Project is projected to have first gold in June 2019.

Despite the overwhelming potential of the project, both companies believe that the best investment they can make is in their employees.

Gold Roads has just embraced mental health first aid and is working to ensure that their employees have a vital work/life balance by reworking their roster and conducting facility upgrades. Gold Fields is looking even further into the future, to encouraging more workers into the mining industry through awareness and education programmes.

“I think we have to reach further down and go back to a early/late primary school level and plant a seed,” Mathews explained.

Beyond that, the two agreed that the industry needs to be looking for the next wave of leaders differently. Instead of simply promoting those who have the qualifications, they suggested looking at people’s attributes, experience and transferable soft skills.

“If we can get people with the right aptitudes, energy and who fit our culture, that is the big difference,” Mathews explained.

“I believe that our future leaders need to be as it says: leaders,” Murray agreed.

With 6.3 million ounces resources, 3.7 million of reserves, a good exploration upside the future looks bright for Gruyere, but not ones to rest on their laurels the JV partners have set aside almost $100 million in the budget to invest in innovation and technology over the next 12 months.

“We’re investing in the future.

“Our message is about total connectivity, and visibility of assets and people. If we know where everything is, and we know who everyone is, it will make our business much more efficient – up to 20 per cent more efficient. I think that will be the step change in the cost and productivity,” finished Matthews.