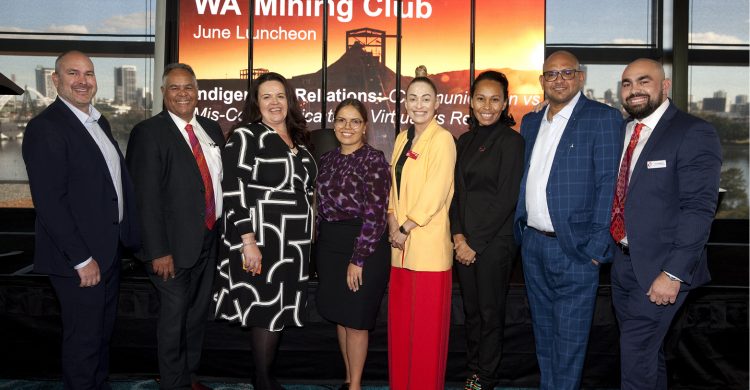 Mine operators need to do more than just give a seat at the table to Traditional Owners if they want to benefit from the rich history and experience of Aboriginal people, according to industry experts.

Panellists at the WA Mining Club’s June luncheon, moderated by Florence Drummond, discussed how companies could provide lasting value beyond compliance to their Traditional Owner partners as a way to support remote communities in a more productive way.

Ms Davenport opened the discussion, saying Thiess was focused on building workforce and supply chain participation and community development, including working with kids in the education sector as a way to give back to the community.

Mr McGrady added that it was no longer accepted for joint ventures with Aboriginal businesses to be focussed on the short term.

“If you’re not looking to get into this venture for five years, don’t do it. Aboriginal people are sick of short-term opportunities,” he said.

He praised Fortescue’s long-term vision when it came to Indigenous engagement which focused on building capability.

“In 2006, Fortescue started their V-Tech program, an entry-level training program to help Traditional Owners become part of the operations on their country,” Mr McGrady said.

“Since then, Fortescue’s trained more than 1000 Traditional Owners and Aboriginal people from the Pilbara into its operation.”

“Going back five or 10 years ago, there was no choice with the black-clad joint ventures, because back then companies didn’t help Indigenous people build their capability or capacity,” he said.

“Nowadays it’s good because we can choose our capacity partners.”

Ms Davenport said that it was important to also include Aboriginal businesses in the supply chain but warned that it wasn’t enough to wait for them to approach; companies needed to reach out to them.

“It won’t happen naturally,” she said.

“All too often, when I’m sitting and talking with Aboriginal businesses, I hear, ‘we just don’t know who to talk to,’ and the bigger the organisation, the harder it is for them to get access.

“You need to go to them and make them aware of what the opportunity is and what the process is for being a part of your supply chain.

“Engaging with local Aboriginal businesses before even putting a tender submission in allows you to bring them into the supply chain at the commencement of a contract, which means you’re successful in having them solidly invested in your supply chain and you grow together.”

However, she said there was still a major barrier in the form of mining contractors providing opportunities to Traditional Owner businesses to work on their own land and give back to their communities.

“Inherently, there’s become a conception that you can’t work anywhere other than your own country,” Ms Davenport said.

“We need to find opportunities to shift and be a bit more agile in our thinking in that space.”

She said that a way around this barrier was to look to engage Aboriginal businesses more generally, rather than only looking at Traditional Owners.

Mr Taylor said he had also experienced this same barrier during his time with Cundaline Resources.

“We’re only pigeon-holed to where we can work when working with clients,” he said.

“We’re denied opportunities for tenders outside our zone because we’re the Traditional Owner from another area.”

One solution to the pigeon-hole scenario Mr Taylor offered was for Indigenous businesses to diversify and partner with other Traditional Owners.

While building capacity and educating Aboriginal people benefitted the communities they served, the panellists agreed that mining companies also would benefit from taking strides to better understand Aboriginal people.

“Understanding the context around history, some of the cultural norms, the way some of the groups work, and the intergenerational trauma that’s come about as a result of some of the history provides a base level knowledge around Aboriginal culture and current-day context,” Ms Davenport said.

“If you seek to better understand Aboriginal people and culture, then you will be better able to communicate with them.”

Ms Garlett’s advice to mining companies was to not try and draw answers out of them, but to simply sit and listen to what Traditional Owners had to say.

“A lot of our Elders will tell us what they want to tell us, and they’ll give us information that we want, rather than us pushing for information we want to know to get things done,” she said.

Mr McGrady added that open dialogue between the two groups wasn’t a role for operations; contractors needed to have a dedicated champion internally that held the relationship.

“This champion needs to make sure they sit down, have a cup of tea, listen with the Elders, listen to the community, and translate that back to the board room and throughout the operations,” he said.

However, Ms Garlett said it was also important to involve Aboriginal people in strategic decision-making to fully benefit from their insights.

“Have integrity and respect in what you’re doing, and involve Aboriginal people in your strategy, because that is where we can really change things,” Ms Garlett said.

“We need to build relationships based on mutual trust, relevant for today and fit for purpose, so it’s important, when it comes to governance, to have Aboriginal people in executive level roles because that drives the strategy of a company.

She used BHP’s water stewardship as an example for the expertise than can be found with Traditional Owner groups.

“Traditional owners have more than 60,000 years of sustainable practices when it comes to water management,” she said. “It’s really important that we integrate that into the way we manage water in the future.”

When asked for their key takeaways, Ms Davenport’s was to engage Traditional Owners early, Mr Taylor wanted more opportunities to be opened to Indigenous people, Ms Garlett reiterated the importance of understanding Aboriginal people better, and Mr McGrady urged the audience to challenge the narrative and innovate.