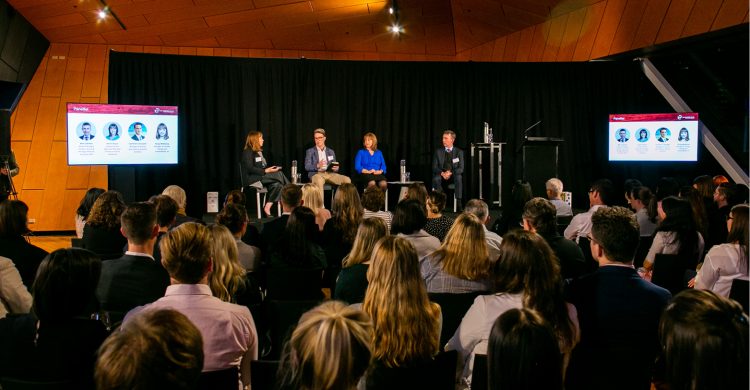 The mining sector could take “easy wins” on the road to net-zero emissions while waiting for technology to become more advanced to enable greater savings, a panel told the WA Mining Club’s Young Professionals its sold-out event.

Mr Creswell kicked off the discussion stating that carbon neutral projects could be categorised as easy wins, which are transitional projects; enablers for decarbonisation such as electric haul trucks; and transformation projects “which help you get to a zero-carbon mine site”.

He told the audience that it is important for industry not to engage in too much “future thinking” and suggested that mining companies implement as many quick wins now to allow the technology to catch up, so that it becomes commercially viable and ready for site implementation.

Mr Cullinan referenced batteries as an example of a technology that was available now and improving but still “had a long way to go”.

“It is important to focus on decisions that you can make now and not lock yourself in to a short- or medium-term future,” he said.

“It’s about picking the ones that are viable and then pushing those forward to be able to do it at large quantities at the end of the day.

“Certainly, batteries are already there but they need to be much larger and need to be charged very quickly for a very large mining truck for instance.”

Ms Boyce agreed, stating that there was no single winner for future technologies.  She used the example of wind and solar as ways to combine technologies to meet requirements.

“We’re implementing technology changes within our operations to enhance the use of renewables and decarbonise our operations,” she said.

Fortescue recently partnered with Williams Advanced Engineering to look at battery powered electric haul trucks that could have the ability to regenerate power whilst travelling downhill as well as “trials to decarbonise the downstream products that we work with” including green steel and green iron.

Due to hydrogen’s density, Mr Cullinan stated it would be less suited to haul trucks compared to other types of equipment such as ships.

“The collective wisdom is that hydrogen is probably an end-state fuel and I think that’s where we’ll get to; it’s a question of how quickly we get there and which equipment we prioritise,” he said.

Ms Boyce offered a broader perspective saying hydrogen is a way to “decarbonise the world.”

“We see hydrogen as the way of the future because it is very abundant and is a really great way of transporting energy,” she said.

“To be able to generate renewable energy in locations where it’s readily available but convert that into a form that can be transported and exported is a huge opportunity to export energy from Australia to countries with their own targets for decarbonising.”

Fortescue is examining a 250-megawatt green hydrogen and ammonia project at Bell Bay, Tasmania, with the capacity to produce 250,000 tonnes of green ammonia per year that can be used for fuel and explosives.

The idea of choosing technology that is “fit for purpose” to ensure the availability and reliability of renewables was reinforced by Ms Boyce.

“What Fortescue is looking at, at the moment, is a mix of energy solutions. We’re not picking a winner, we’re looking at combinations of renewable energy sources,” she said.

Mr Cullinan had his doubts as to whether renewable energy alone would be able to sustain the mining sector.

“That tipping point, when you go, ‘we’re going to move from a proportion of our energy being renewables to it being totally renewable’. That’s the time when it gets a lot harder,” he said.

Mr Cullinan believed it was “well within the organisation” when it came to BHP’s drivers.

“It’s incredibly motivating for people to join a company that’s making a difference,” he said.

Ms Boyce thought that founder and chairman of Fortescue, Andrew Forrest, was the driver of action and that played into the recent announcement of bringing forward Fortescue’s carbon neutral goal by 2030.

“We don’t just do that with making announcements,” she said.

“We’ve got some sound projects that we’ve built behind our portfolio of projects, and we’ve identified that we can actually achieve that goal.”

The goal of reducing Fortescue’s own carbon emissions within the next nine years places Fortescue two decades ahead of its mining counterparts.

Ms Boyce went another step further to explain to the audience Fortescue’s commitment via the Fortescue Future Industries (FFI), which has a sole focus on decarbonisation, developing renewable energy projects including green hydrogen and ammonia plants at a global scale.

“Fortescue Future Industries was specifically set up to look at opportunities to decarbonise throughout the world,” she said.

“We’ve actually identified 300 gigawatts worth of renewable energy projects that we’ve got definition around. They are no longer just ideas.”

The “very ambitious pathway” of the International Energy Agency’s net zero by 2050 roadmap was one that Deloitte’s Mr Cresswell believed could be achieved through electrification.

“It’s making electricity the focus of the net-zero 2050 pathway; so how can we electrify assets and move from the gas transition,” he said.

Mr Cullinan didn’t think any more motivation was needed but instead there should be a focus on the mining sector coming together to promote enhanced buying power.

“One thing that we’re definitely wanting is to create these syndicates with other mining companies so that we can get that collective mass into a solution,” he said.

The mining and resources sector needed to work toward a circular economy particularly within the downstream processes, according to Ms Boyce.

“The elephant in the room, from an iron ore perspective, is that obviously the production of steel is highly carbon-intensive by our customers so from our perspective there’s no point in just decarbonising our own operations and producing a product that then has a high carbon intensity when it’s actually in downstream processes so we’re investing in research into green steel.” she said.

A pilot plant plan in the Pilbara is underway for Fortescue with the potential for green steel production in the next few years.

With the Task Force on Climate-related Financial Disclosures (TCFD) requiring organisations to undergo Climate Risk Assessments, there are opportunities for WA miners when it comes to transition of risk.

Ms Boyce thought that we shouldn’t have to rely on the Government to take charge.

“I think the biggest thing is for industry to lead, not wait for Government to try to beat us up with the stick,” she said.

“Be out there and put forward targets that we are going to do and show that it’s actually achievable.

“The role of Government is to enable that or allow that to happen, to not make it more difficult for companies rather than to actually penalise them.”

Mr Cullinan believed the “partnering with downstream” approach to be the most important.  This was largely backed by Mr Cresswell who said that moving processing and refining onshore was preferable.

“You can then really control the decarbonisation and transition,” Mr Cresswell said.

The minimisation of risk, internally, was also of concern to Mr Cullinan, who said that economics were the largest concern when meeting BHP’s proposed carbon neutral target.

“For us the economics, initially at least, are challenging and so I think we need to recognise that,” he said.

“It’s important for the traditional metrics for which you value investment are adjusted for the social value solution.  These social and environment investments obviously hold huge value for shareholders and the company.”

Ms Boyce said environmental impacts were the most challenging to quantify value.

“In order to get the environmental outcomes that we’re seeking, we have to balance the development projects that we’re actually doing with the benefits to society as a whole and that is something that needs to be well articulated,” she said.

According to McKinsey analysts, companies were setting an internal charge on carbon dioxide emissions from assets and projects to determine the impact of emissions on P&L statements and investment choices.

The influence of pricing a company based on their social and environmental values became a recent topic of interest, and Mr Cresswell highlighted the importance of including it in investment decision making.

“It’s really understanding the implications of internal carbon price and what that means to investment banking decisions,” he said.

The panel went on to debate if mining companies held a responsibility to influence consumers and the downstream value chain to reduce emissions.

Mr Cresswell suggested the best way to influence them was through increasing collaboration and shared accountability across the value chain by driving the pressure from customers through the chain.

“Without minerals, we don’t have the value chain,” he said.

Ms Boyce took the opposite approach as she described the influence as the other way around, suggesting the influence on Fortescue was coming directly from customers.

“Our customers are seeking to actually decarbonise and they see that by being able to buy a product from a company who is already decarbonising is key to their decisions.”

Overall, it was agreed that the end game is to decarbonise the entirety of the value chain.