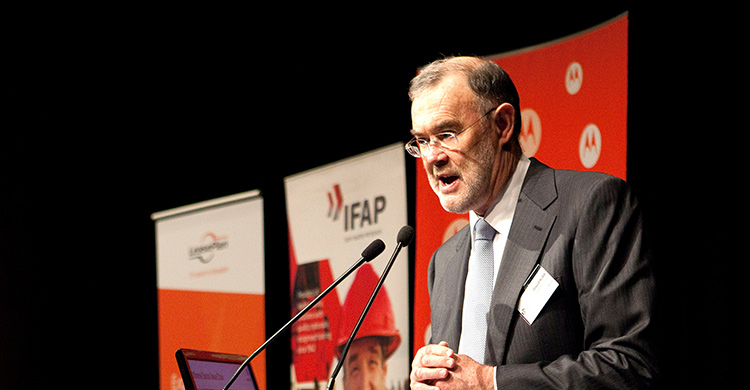 After ten years at the helm of Iluka David Robb will leave the company this year.

He took WA Mining Club members through his time at Iluka

When David Robb joined Iluka in October 2006 the company was $610 million in debt and had recorded a net loss of $85.9 million for the 2005 calendar year.

Close to ten years later the company has achieved a major milestone with zero net debt at the end of the 2015 calendar year. Revenue from mineral sands has increased eight-fold reaching $819.8 million last year.

“It’s important that you strengthen a balance sheet in what I would described as in the right way at the right time. Over the past decade we’ve gone from $600m in debt to zero,” Mr Robb told attendees at the WAMC May luncheon.

He said that part of Iluka’s strategy has been to try and march to “the beat of its own drum” and doing things when it might not necessarily make sense at face value.

“Resources and mining is hugely pro-cyclical; everybody marches in a herd to the cliff, falls over it and then it’s painful,” Mr Robb said.

“Everybody’s guilty of it but we try and march to the beat of our own drum. But to do that you need a good balance sheet, and we have it, we also have available facilities in excess of $1 billion. Part of acting counter-cyclically is that you talk to the banks when you don’t need them, when you do need them it doesn’t produce desirable outcomes, in my experience.

“It summarises our journey from a pretty parlous position to one of strength.

Mr Robb said Iluka had worked hard to retain a shareholder focus, but pointed out that didn’t extend to the company adopting a progressive dividend policy where company likes BHP Billiton and Rio Tinto committed to retaining dividends to shareholders regardless of earnings.

“We have a simple shareholder focus…[I think] we’re known for our willingness to flex our business and shareholders’ interests and for our capital discipline and our rigour, Mr Robb said.

“If we have cash it goes to shareholders and if we don’t then it doesn’t – there’s never been anything progressive about. They’ve now discredited progressive dividend policies, we’ve never been down that path. I think they’re a nonsense in a cyclical world and it’s interesting that the big guys have come to that realisation also.”

Mr Robb said it was being spent “on things” the company believed could “genuinely transform [the] industry”.

“These are not minor process improvements with a bit of extra recovery here or cost reduction there these are big deals, if we’re right.”

Mr Robb is expected to leave Iluka in the second half of this year once the board of directors has found a replacement.