Miner of the Month with Resources Roadhouse: Sheffield Resources 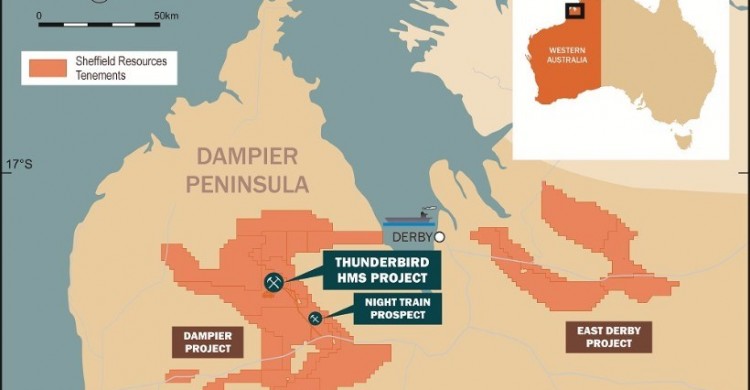 Miner of the Month with Resources Roadhouse: Sheffield Resources

Sheffield Resources (ASX: SFX) has taken one large, and a few smaller steps towards hitting the construction phase of the company’s Thunderbird mineral sands project near Derby in northern Western Australia.

Before getting into details, it’s worth a quick look at the company’s more recent achievements at Thunderbird.

The large step taken by Sheffield was the completion of the project’s Bankable Feasibility Study (BFS) in March that ticked off some impressive figures, including:

EBITDA of $5.1 billion over a long Life of Mine of 42 years, offering leverage to multiple pricing cycles;

Stage 1 capital of $324 million plus $24 million contingency; and

The updated Ore Reserve supports the project’s 42 year mine life with a very low life-of-mine strip ratio (waste:ore) of 0.78:1 and includes a Proved Ore Reserve category of 235.8 million tonnes at 13.3 per cent HM.

Once the BFS was close off Sheffield wasted little time in announcing it had signed three non-binding offtake Memorandums of Understanding (MoUs) for the premium zircon product to be produced from Thunderbird.

The company has environmental permitting on track following conclusion of a Public Environmental Review process with Native Title processes on schedule.

All this activity is supported by an enviable cash position of $11 million as at 31 March 2017.

The BFS was based on a conventional dozer trap mineral sands mining and processing operation.

“From an environmental side – in the actual mining and processing of it all – we will use a moving hole method so we move the hole forward and backfill behind,” Sheffield Resources managing director Bruce McFadzean told The Resources Roadhouse.

“We get to rehabilitate the mine as we go so there is no hole left once the mining is finished and we don’t use chemicals, except for acid which is neutralised into fertiliser in the rehabilitation process.”

“I don’t think I have been involved in a project in my entire career, which currently stand at 38 years, which possess these kinds of metrics.

“We have a 42-year mine life, potentially longer, for a project that has a mining and processing operation that is very environmentally friendly.”

From the extensive test work and process design carried out during the BFS and earlier studies, Sheffield has developed a suite of high quality mineral sands products with specifications suited to market requirements.

“The Thunderbird mine will primarily produce two benign products that everyone uses every day,” McFadzean explained.

“Everyone eats off crockery, sits on the toilet, or stands on tiles – that’s the zircon side.

“And on the titanium side – it’s the metal everyone puts inside their body for new hips and new knees.

“It’s in your toothpaste, it’s in your sunblock, you put it on your kids, so you don’t get any more benign products than that.”

The major commodity to be produced from Thunderbird will be the premium zircon, which will be a high quality ceramic grade zircon containing greater than 66 per cent zirconium dioxide (ZrO2).

The mine will also produce LTR Ilmenite; a pre-reduced, high-grade titanium dioxide (TiO2) ilmenite with low alkalis and low chromium that will be suitable as:

Production of chloride grade and sulphate grade slag – 88 per cent TiO2 with a high purity pig iron co-product; and

Potential blended feedstock for chloride processing. LTR Ilmenite can be produced at higher grades (57 to 59 per cent TiO2) for this potential market.

Hi-Ti88 – suited to the flux cored wire welding market, production of titanium sponge, or blended material for processing via the chloride process;

Zircon concentrate – zircon rich (44 per cent ZrO2, 20 per cent TiO2) suited to the zirconium chemicals industry, and further upgrading; and

Titano-magnetite – a co-product from the LTR process suited to furnace protection in the steel industry.

Test work undertaken during the BFS by Roundhill Engineering determined the LTR conditions required to reduce the iron (III) oxide (Fe2O3) content of the ilmenite product to less than 13 per cent.

Sheffield expects the production of an ilmenite product with these specifications to attract a further pricing premium in the Chinese market.

“Both products are forecast to be in deficit by 2020,” McFadzean said.

“From what we have heard, the market is factoring in Thunderbird coming online and as a result we have had very strong interest in the offtake.”

The strong interest culminated in the signing of three non-binding MoUs for the future sale of premium zircon from the Thunderbird project.

The combined agreements represent up to approximately 20 per cent of the estimated total volume of premium zircon expected to be produced from Stage 1 of the Thunderbird project.

The signing of the MoUs came after product testing and discussions between the parties, with all involved stating their intentions to finalise negotiations and enter binding offtake agreements.

“Signing these first MoUs with zircon consumers with a high standing in the industry, confirmed our capability of supplying the global market with very high quality products once in production,” McFadzean said.

“The BFS determined zircon will represent 62 per cent of the estimated project revenues and we look forward to advancing binding offtake agreements with both Ruby and CFM, as cornerstone premium zircon customers of the company.

Sheffield quickly followed up these signings with a third non-binding MoU with Sukaso Ceracolors Pvt Ltd, India’s largest ceramic raw materials supplier, which will account for approximately 20 per cent of the project’s estimated premium zircon.

“Establishment of these important relationships speaks volumes for the scale and quality of Thunderbird across the expected 42-year life of mine,” McFadzean said.

“Consumers are clearly positioning themselves to identify potential long term sources of supply for premium zircon product, and the MoU signed with Sukaso confirms Thunderbird’s capability and unique market position as a future source of very high quality products.”

As MoUs are being signed all over the place, Sheffield has continued to advance Environmental approval and Native Title processes with a Public Environmental Review (PER) opened for public comment during January and February.

The environmental approval process is scheduled to conclude in mid- 2017 and the Native Title process anticipated before mid-2017.

“We anticipate construction of the mine commencing this year, which is obviously all permitting dependent,” McFadzean said.

“We’re expecting permitting to be completed by Q3 and we can do – under the permitting – some pre-works under the approval of the DMP.

“We are maintaining a substantial engagement with a range of stakeholders throughout the Kimberley local community by conducting a series of BFS and PER information sessions and stakeholder briefings taking place.”