Miner of the Month – Doray Minerals 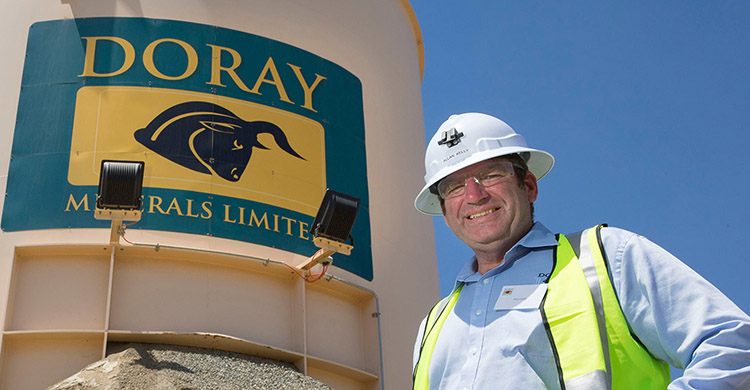 Miner of the Month – Doray Minerals

Mr Allan Kelly surprised everyone when he announced his resignation at the Doray Minerals AGM last Friday, after seven and half years at the helm.

Mr Kelly founded Doray in mid-2009 and managed the company through what was recognised as the most successful IPO of2010, in terms of share price increase. This was soon followed by the discovery, funding, permitting, construction and commissioning of the operation of the Andy Well Gold Project.

Most recently, Mr Kelly managed the takeover of Mutiny Gold Limited and the subsequent funding, construction and commissioning of the high-grade Deflector Gold Project, which recently commenced production.

Doray commenced production of gold bullion and gold‐copper‐silver concentrate at Deflector approximately 14 months after acquiring the project from Mutiny Gold.

In its first full Quarter of production, Deflector’s performance was highly satisfactory, milling 105,721 tonnes of ore to produce 8,215 ounces of gold through the plant’s gravity and flotation circuits in addition to 883 tonnes of copper.

Deflector has carried a misguided reputation for being difficult, due to the presence of copper in the high-grade gold mineralisation.

However, the main problem was that those running the operation were unable solve how to treat this ore through the nearby Gullewa gold plant.

The presence of high-grade copper in the oxide ore didn’t mix with a typical CIL circuit and the project’s reputation for having ‘difficult metallurgy’ was cast.

“The copper introduces a different process to a normal gold mine,” Kelly said.

“Basically we have oxide material, transitional material and sulphide – all of which are different mineralogy.

“We have pretty much completed the ramp up stage on the oxide material and are now starting to introduce the transitional material.

“By early 2017 we should be largely through the transitional ore and moving into the primary underground ore.

“That’s the main game and what the processing plant has been designed around.”

Doray recently completed an institutional placement to raise around $24.9 million, which will reduce the company’s debt balance and pay for near‐mine and regional exploration with a focus on identifying additional ore sources for both Andy Well and Deflector.

“We used debt to develop both mines, because they had very quick pay back, and we didn’t dilute our shareholders,” Kelly said.

“We realised debt around Deflector could restrict how we can spend our money in regards to exploration and advancement of the project.

“That was the key behind the raising, to ensure we had good exploration capital on hand and a strong cash position, from which we can negotiate a re‐sculpting of our current debt repayment profile as we go through the ramping up phase at the Deflector mine,” Kelly said.

Once in steady-state production in primary ore Deflector is projected to produce 60,000 ounces of gold per year, plus copper and silver, with an initial mine life of six years.

There is plenty of exploration upside both within the Deflector orebodies and within the wider tenement package surrounding the mine.

“Deflector is Western Australia’s newest high-grade underground gold mine and is the second high-grade gold mine and processing plant that Doray Minerals has funded, built and commissioned within the last four years,” Kelly said.