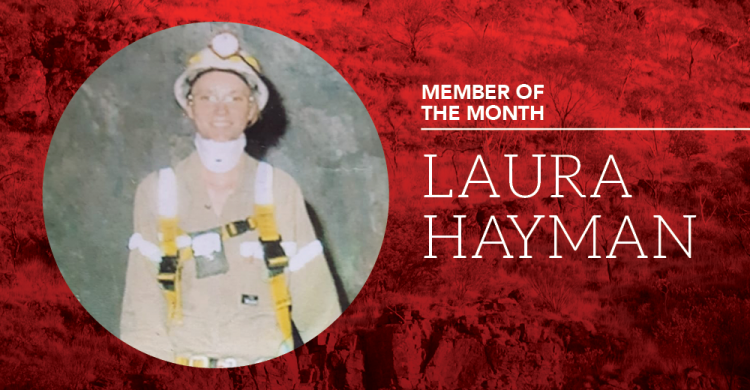 Laura Hayman, her sister and brother are all high achievers, with all three growing up to become engineers.

“My parents were intent that we all did well academically in STEM subjects, so that played a major part of our childhood,” Laura said.

Growing up in regional Victoria and Melbourne, Laura did all the usual things as a kid, playing sports, musical instruments, bushwalking and riding bikes.

Having played the saxophone since she was 13, Laura says if she wasn’t in the mining industry, she would have liked to played the instrument professionally, as she has always been naturally gifted at music.

In 2004, after completing her Bachelor of Applied Science and Bachelors degree in Geological Engineering at RMIT University, Laura was offered a Graduate Engineer role at WMC Resources at their Perseverance underground nickel mine.

Starting off as a FIFO worker, she kept with that lifestyle for the first ten years of her career, working in both underground and open pit mining operations.

“I enjoyed the comradery of a FIFO role, having R&R, and the big salary. The lifestyle was great, especially since my husband and I were on the same roster,” Laura said.

During this time, Laura furthered her studies, completing a Master’s in Mining Geomechanics at Curtin University in 2011.

FIFO work resulted in a quick career progression for Laura, and also meant she became a proud homeowner at 26.

“I loved the field work side of it. But as I got a bit older, I wanted like to do more design work and come home every night, so I made the switch to a corporate role.”

In 2014, Laura joined Rio Tinto as a Senior Geotechnical engineer in their Perth office, working in pit slope designs.

In this role, she figures out the productivity and safety gains that can be made by harnessing the power of data science techniques and software in geotechnical engineering.

Laura says Rio Tinto’s Principal Geotechnical Engineer, Iain Daggers has been her best boss so far, and she aspires to hold the same position as him one day.

In stark contrast to the demands of her job, Laura’s home life is relaxed.

Laura and her husband enjoy the simple pleasures, like taking her their four-year-old Labrador George for a walk along the ocean, reading an inspirational book and spending time with family.  Laura also does transcendental meditation, a form of silent mantra meditation.

Laura joined the WA Mining Club two months ago because of the organisations work in opening up opportunities to women and working towards gender equality in mining.

Laura is also heavily involved with the Australasian Institute of Mining and Metallurgy (AusIMM), mentoring young women and trying to improve female participation rates in the mining industry.

In fact, if given the chance to change one thing about the world, she would increase the percentage of women in the mining industry to 50%.

Laura’s career has taken her across the globe, spanning many different commodities, however the most striking location travelled to was Tennant Creek in the Northern Territory.

“Every mine site has its own distinct local fauna wandering around; in Western Australia it’s mainly goats, sheep, cattle, emus, dingoes, kangaroos and echidnas; but in Tennant Creek it was donkeys. That surprised me.”

Having travelled throughout Europe, Asia, Africa, New Zealand and Australia, she lists Cinque Terre in Italy and Karijini National Park as the favourite places she’s visited.