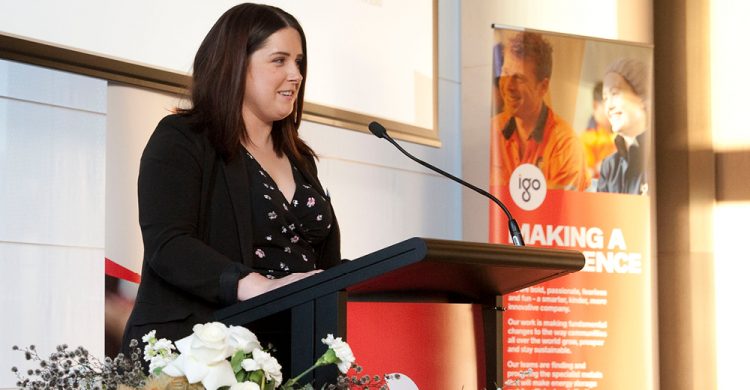 Mining Monthly has named Samantha Ware from Gold Road Resources as its Emerging Leader of the Year Award for 2020.

Samantha has been working in the mining industry for eight years and is Senior HR Advisor at the Gruyere Gold Mine, a joint venture between Gold Road Resources and Gold Fields Australia.

“Being a part of the start-up team at Gruyere and having the opportunity to be with a project from construction through production has been a great experience and has helped me to better understand the strategic role HR plays when establishing and when running a world class mining operation,” Samantha said.

She said she was shocked at being named Emerging Leader of the Year. “After hearing the news, I took time to reflect on the year and the personal growth I experienced, as well as the exciting initiatives I was fortunate to participate in and contribute to the mining industry,” she said.

She is passionate about increasing diversity and inclusion in the industry, a theme she has championed as Founding Chair of the WA Mining Club Young Professionals through speaking engagements including the 2018 Gold Industry Group Great Diversity Debate and 2019 Future of Mining Conference in Sydney.

“I am passionate about people,” she said. “I am that (probably annoying) person, who, from time to time, believes in individuals more than they believe in themselves. I love helping people see their potential and rise to challenges.”

Samantha attended an industry event in late 2017 where, out of 400 attendees, she was one of only a few young professionals.

After two people questioned her attendance, with one suggesting the event was for mining executives specifically and the she did not fit that criteria – she saw an opportunity.

“When Kirsty Danby from the WA Mining Club reached out to me in 2018 to discuss the proposed establishment of WAMC YP I felt it was a fantastic opportunity to ensure YPs have a space to network, develop and engage with industry,” Samantha said.

The club established the WAMC YP to retain and support the development of young professionals and provide a networking opportunity to help those starting their careers engage with senior mining and resources industry figures. The WAMC YP has 140 members, with 40 per cent being women.

Samantha believes there will always be room for further improvement. “Many mining organisations have put inclusion and diversity as a high priority within their strategic focus,” she said.

“I believe a further focus on STEM career paths targeted at middle and secondary school students would be beneficial to attract the next generation of mining professionals.”

She said that so far, her view of success was knowing that she had made a positive impact in multiple aspects of her life including work, volunteering, industry engagement, family, and relationships.

But at eight months pregnant she has a “sneaky suspicion” that her version of success is “due for another change in the very near future.”