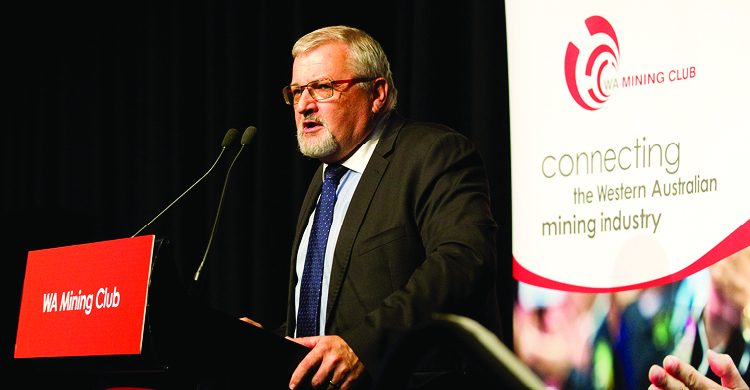 The global shift towards electric vehicles is a massive opportunity for Western Australia according to a recent rousing presentation by Adrian Griffin, Managing Director of Lithium Australia for the WA Mining Club.

Mr Griffin equates the current push to a low carbon lithium powered future to the collaborative effort required to develop the much-loved Concord aeroplane, which first went to the drawing board in the 1954 but didn’t fly until 1969.

“The interesting thing about this aircraft is that it was designed before the materials of construction were available to build it.

According to Griffin, Lithium Australia is doing its part in getting this modern-day Concord off the ground by ‘closing the loop’ in the energy-metal cycle.

Lithium Australia’s patented extraction processes and cathode material production technology are just part of the puzzle. The loop is closed when enhanced battery recycling techniques are added to the supply chain according to Griffin.

The Perth-based company is positioning these technologies to curtail the demand for lithium-ion batteries brought about by the global switch to electric vehicles and the phasing out of internal combustion engines.

A report by Bloomberg New Energy Finance Limited forecasts that sales of electric vehicles will increase from 1.1 million worldwide in 2017, to 11 million in 2025 and then surge to 30 million in 2030 as they become cheaper to make than internal combustion engine cars.

Mr Griffin was quick to point out that WA is in a desirable position to take advantage of this global shift.

“There’s nothing that comes close to the resource base that we have here (in WA).

“Australia and Western Australia, in particular, are dominant in the supply chain. We’ve got the tiger by the tail here, and we can actually control the whole industry if we so choose,” Mr Griffin said.

The Managing Director said that one of the things you rarely see in analyst reports is the consumption of lithium batteries that may well end up in the renewable energy sector.

By 2025 there’s about 5,000-gigawatt hours of batteries required to store that energy and back it up. There’s a requirement immediately for 2.5 million tonnes of lithium carbonate equivalent.

“The demand is absolutely enormous. We’re in a position where the automotive industry has committed undoubtedly to Lithium-ion battery technology.

We already know what the production profile is like and substitutes are not an option because people have already committed the capital to the current technology and these things will go ahead.

“Just to meet the demand of the internal combustion cars being phased out, you are going to have to satisfy the requirements of another 50 million vehicles or thereabouts.

“What does that mean in terms of lithium carbonate demand, there’s about another three and a half million tonnes per annum required.

“Morgan Stanley tells you there’s going to be a glut, what do we produce today? 200,000 tonnes. It’s not a drop in the ocean,” said Griffin.