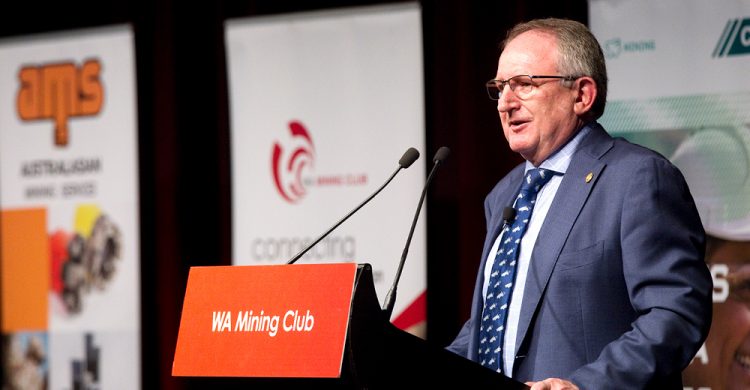 Before deciding on becoming an apprentice with Hastings Deering – a Caterpillar dealership based in Brisbane – Jim Walker was all set to become a teacher.

“My passion and heart were with my dad in the earthmoving industry,” Mr Walker said in a speech at the WA Mining Club’s September industry luncheon.

“I loved every day. I’d get some jobs that weren’t great, but I’d quickly forget about those when the next exciting one came along.”

Jobs have been a hot topic in the mining industry for some time and while the lack of university graduates may have garnered the most headlines, only 20 per cent of mining jobs today require a university degree.

For Mr Walker, as head of the WA Training Board, that means the industry needs a robust vocational education training (VET) program and collaboration is a key ingredient in getting there.

A Certificate II in Autonomous Workplace Operations will be introduced to the TAFE curriculum and is currently being piloted by a group of Rio Tinto’s iron ore workers.

The course will also be tested by year 11 and 12 students in selected high schools across the State.

Mr Walker said that the group is also developing a Certificate II in maintenance – an accreditation, which may be an opportunity for truck drivers displaced by automation to reskill into a new area of the industry.

“While automation may remove people from hazardous environments, equipment still needs to be maintained,” he said.

“These jobs can be as rewarding or more rewarding than what they were doing previously.”

Rio Tinto is contributing up to $2 million to the development of the new qualifications with a Certificate IV in Remote Centre Operations also in development.

“If we get together and collaborate, we can develop programs that are applicable across the whole industry rather than on an individual basis,” Mr Walker said.

While Mr Walker and the VET Collaboration group are making inroads in rethinking vocational education at a State level, the Government is only just getting on board at a national level.

Employment Minister Michaelia Cash has launched a review of the National Skills Needs List, before making available a revamped skills shortage payment for businesses to take on an apprentice or trainee or up-skill current staff.

The Government is overhauling the vocational education and training sector, putting a $525 million skills package on the table.

Speaking to an audience filled with many students and young professionals, Mr Walker said that he’d never considered what happened between 2011 and 2014 a mining boom.

“It was a construction boom. It was a building of new mines, putting new equipment on sites but it wasn’t a mining boom,” he said.

“After that was complete, then we started to see the mining boom. We are seeing volumes of minerals and gas being exported from WA at an all-time high.

“This slow and steady growth means that mining companies are prepared to take their workforce along for the ride and invest in their training.

“To the students and scholarship winners out there in the room, you’ve joined a fantastic industry.”