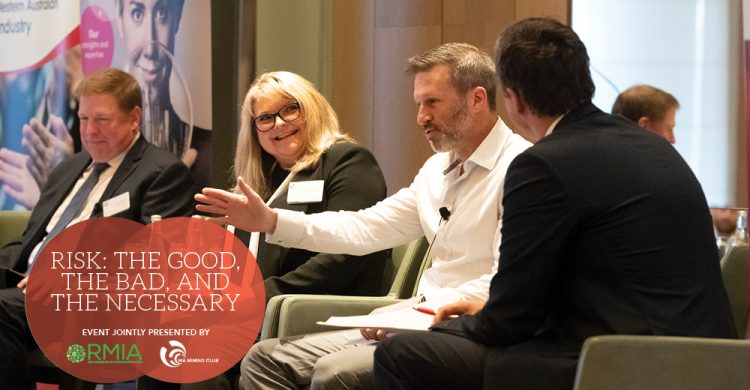 The mining industry has always been a risky one, with worker safety concerns representing only a portion of the challenges. Increasingly strict regulations, the reliance on technology, inconsistent demand for raw materials and high commodity prices are concerns that a panel of experts who spoke a recent WA Mining Club function have to consider on a daily basis.

While the industry may be filled with potential hazards, all risks are not created equal according to Anthony Reardon, Head of Risk Transformation at BHP who said that a failure to take calculated risks is just as damaging for mining companies as taking on too many.

According to Reardon, operational risks are things that don’t hurt anyone and don’t break the law.

“There is not really any strategic benefits from this type of risk, so the objective is to prevent them. These types of risks are where maintaining a risk register is required; is where proportionate governance is applied, to make sure controls, and rules are being followed,” said Reardon.

According to Alex Atkins, Managing Director of Alex Atkins and Associates who called on the writings of Professor Andrew Hopkins the organisational structure of a company is at the heart of findings of disaster investigations in the mining and oil and gas industry over the past 20 to 30 years.

“Deep domain STEM experts who know what must go right and what can go wrong, are basically sidelined by organisational structures that put Business Line Managers and their P&L objectives first and foremost.

“Too often I see mining companies predominantly run by purely commercial professions. While we need to be commercially savvy to run a profitable business, this can’t be at the expense of technical and operational excellence,” said Atkins.

This problem has created a systemic black hole when it comes to having the right people in executive and board positions to ask the right questions about assurance of technical and operational risk in mining, meaning that as long as people, systems, and processes remain imperfect, operational risk cannot be fully eliminated.

Strategy risks are defined by taking risk, not avoiding them according to Reardon, who cites Kodak – a company that held the patents for some of the first digital cameras but chose to continue investing in photo film – as an example of a company that failed to take risks.

For Kirsty Danby, Director of specialist mining communications firm Platform Communications, the mining sector is at a similar crossroads, investing 0.5 per cent of revenue in R&D, a fraction of the 3 – 5 per cent invested by the oil and gas sector.

“Australia has a typically risk-averse approach to technology. We don’t have a culture of pursuing high-risk high-reward innovation opportunities and that in itself is a risk to our global competitiveness, despite the country having a wealth of talent across the technology landscape,” said Danby.

Notwithstanding this, there are green shoots in the industry, including the innovative $40 million solar power project at Sandfire’s DeGrussa Copper-Gold Mine. Covering a total area of over 20 hectares, it is the largest integrated off-grid solar and battery storage facility in Australia.

Looking back retrospectively, Richard Beazley, Sandfire’s Chief Executive Officer admits that the solar project was a great risk to take, as it now supplies around 20 per cent of the annual power requirements of the mine and cuts its emissions by around 12,000 tonnes of carbon dioxide a year, a reduction of around 15 per cent based on its reported emissions for FY2016.

“Just on the pure operational side, the ability to lower our energy costs have been substantial and we would certainly do that again.

“But a really big pick up is the brand recognition that it has given Sandfire as a leader in this area, not just in Australia but globally,” said Beazley.

On a larger scale, iron ore majors in the Pilbara have moved forwards in leaps and bounds in technology because they have the right risk mindset according to Atkins.

“As they progress their OEMs and the supply chain create products and services required for the digital transformation that can eventually trickle down to other miners. Their staff move on and share their knowledge too. I think this is how FMG and Roy Hill caught up so quickly with Rio Tinto and BHP,” said Atkins.

The risks hiding around the corner

“When I talk to people about emerging risk, they often roll their eyes at me, which is understandable after all – how can you know what you don’t know.

“We have enough trouble focusing on our current risks, without focusing on the ones that are around the corner, said Reardon.

Taking a step back to the trickle down of new technologies to small and mid-caps, a potential emerging risk is of an OEM becoming a sticky vendor. The mining company becomes beholden to the OEM for this service and doesn’t have access to the IP or data so that they can reverse engineer it or extract increased margin for themselves.

“The secret now is to increase competition amongst the OEMs by increasing their diversity, by creating a collaborative ecosystem of METS companies to provide the services and products in an integrated way, to keep up with the rate of obsolescence and pace of change.

“That’s the future I see, but I don’t believe the mining industry has the right mindset for a collaborative open-architecture ecosystem just yet,” said Atkins.

These sentiments are shared by Danby, who said that she has only seen small pockets of real collaboration in her 20 years in the business despite the nation’s enviable tech-talent pool, but she has hope that will change soon.

“Our talent is across all areas of the business – OEM’s, universities, researchers, management consultants – there’s no reason why we can’t be leveraging that to minimise risks.

“Adopting a more collaborative culture that brings brilliant minds together will help manage current and future risks around access to water and energy, depleting resources and reserves and controlling capital and OPEX costs – particularly across challenging assets,” said Danby.

The event was co-presented by RMIA and WA Mining Club. Thanks go to Steve Higginson and Neil Watson for aligning both organisations to a shared goal.