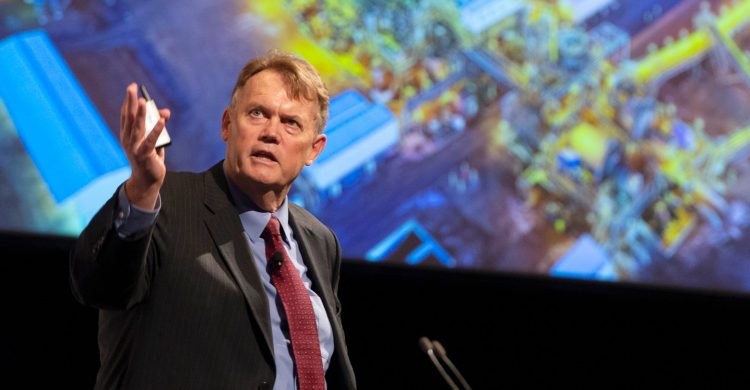 When former P&G global marketing director Jim Stengel collected ten years of data across 50,000 brands, he found a direct relationship between a brand’s ability to serve a higher purpose and its financial performance.

For CEO and Managing Director, Peter Bradford – who spoke at a recent WA Mining Club industry luncheon – the purpose of Independence Group (IGO) is making a difference.

“Our purpose and accompanying narrative were co-created by people in the company including the board, leadership team and a cross section of all parts of the business.

“We are bold, passionate, fearless and fun. We are a smarter, kinder and more innovative company. We believe in a greener future, which is why we do and what we do – search and extract the minerals needed to unlock renewables,” said Bradford in his candid presentation.

This purpose has seen the company strategically place itself to make the most of the predicted boom in renewables, including wind and solar, energy storage and electric vehicle batteries by exploring and extracting nickel and copper.

Mr Bradford, who admitted with some pride that he’s making the switch from a V8 car to an electric-powered Tesla said that he was worried about climate change and that he wanted to make positive contributions at a personal level to reduce carbon usage.

“It’s not just individuals who are worried or acting about climate change. Governments are acting too. All major economies are putting caps on CO2 emissions for production cars of the near future,” said Bradford.

In the EU, cars are responsible for around 12 per cent of total emissions of carbon dioxide (CO2), the main greenhouse gas.

Since 2015, a target of 130 grams of CO2 per kilometre has applied for the EU fleet-wide average emission of new passenger cars.

“Over the ensuing years that will drop to around 60 g CO2/km. So that forces manufacturers to change the type of cars that they are producing.

“If they are going to make all naturally aspirated petrol engines then all cars in their fleet will have to deliver fuel consumption of 4.1 litres per 100 kilometres,” said Bradford.

Peter says that this is a tough challenge and that the only real way to deliver these results will be through the use of hybrid or fully electric vehicles. This will force vast amounts of investment and research and development into the area – pushing down costs and extending the range of EVs.

It is predicted that by 2030 over 60 per cent of new vehicle sales will be for electric cars. And by 2025, 80 per cent of EVs will utilise high nickel content batteries either 811 NMC (nickel, manganese, cobalt) or NCA (nickel, cobalt, aluminium).

Pulling apart the numbers, the EV that Bradford has on order would need over 100 kilograms of nickel.

“Tesla is making some serious inroads. They are the number one selling brand in Norway, and in September they will be number three or four best-selling brand in Australia, which is amazing as Australia doesn’t have any incentives. I know I just bought one,” joked Bradford.

Extra demand means that the nickel market will continue in a sustained deficit and the industry could run the risk of substitution, with stainless steel and electric vehicle manufacturers investing in the R&D to find a more economical alternative.

“What we need is a measured industry response so that we can maintain a robust but sustainable price in the future,” said the CEO.

Bradford, who is also President of the Association of Mining & Exploration Companies (AMEC) says that the industry has allowed exploration expenditure to drop off over the last decade.

“We, as an industry, need to be working harder to find those mines of the future. What’s happening is that we’re starting to see a decline in discoveries. We’ve had a century-long upward trend in significant discoveries, but over the last decade that appears to be dropping off.

“Whether that’s due to a lack of investment, that we’ve plucked all the low hanging fruit or that it means that we have to dig deeper and into more difficult geographies, we need a measured industry-wide response,” said Bradford.

To that end, the company is set to spend $66 million on exploration and discovery in FY19 with 60 per cent in greenfields in Western Australia, South Australia, Northern Territory and further abroad in Greenland.

Bradford says that the IGO approach to exploration is to focus on three elements. Getting the right land, the right people and using the best technology to unlock discoveries.

In tenements where IGO does not hold the mining lease, the company has 30 JV partners. And its exploration team of over 80 people is best-in-class according to Bradford. The team has been charged with the simple mission “to find more Nova’s” – IGO’s 100 per cent owned nickel and copper mine located in the Fraser Range.

If they manage that task, then IGO is sure to remain at the forefront of delivering a green energy future.