Peter Bradford and IGO; already facing up to Net Zero 2050 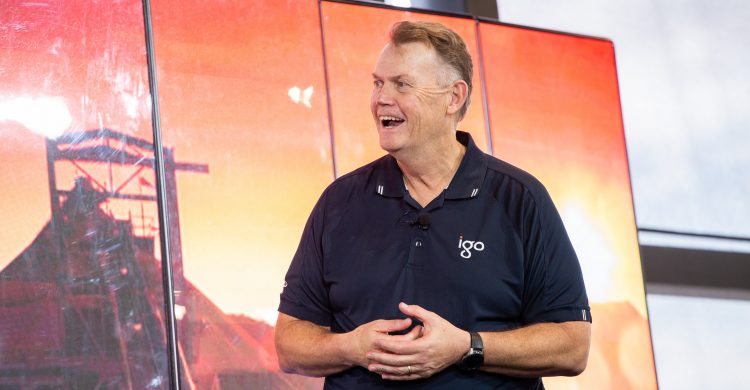 Peter Bradford and IGO; already facing up to Net Zero 2050

It’s hard to imagine mining leader Peter Bradford in a tutu as a boy, but that was the image burnt into the minds of the 460 attendees at our July luncheon.

His Mum thought ballet lessons would improve his football skills, and when you grow up in a farming community like Dalwallinu, there’s no overstating the importance of junior football.

The Managing Director of diversified miner IGO kept the images coming as he looked back at life, and mining, over the last 50 years.

A highlight had to be a photo of him as a teenager in green platform shoes topped by a pair of flared jeans.

And it’s not too often you’ll see a photo of Led Zeppelin frontman Robert Plant at a luncheon, but Peter was also referencing the WA Mining Club’s 50th anniversary.

The nostalgia element raised groans and laughter, but his presentation was about the future of mining, particularly to meet renewable energy demand.

Peter believes we can reach Net Zero emissions by 2050, but he’s concerned by the lack of understanding of the importance of that goal.

‘It’s not going to be easy,’ he says. ‘It’s going to take a lot of work, and people need to understand the urgency.

‘I don’t think everyone’s aware of the background, the narrative and how dire it (climate change) potentially is.’

He believes it will be a considerable task to mine all the metals needed to make that happen.

‘We need to find better ways to explore and devise more innovative ways to get everything done and not take shortcuts.’

Peter’s commitment to developing renewable energy resources is borne out by his company’s ethos.

‘We want to create a better planet,’ he says.

‘We’re transforming IGO into a company that’s a global player in the supply of clean energy metals.

‘That includes nickel, lithium, copper, cobalt and  rare earths, and we’re looking at both upstream and downstream opportunities.’

IGO has the Nova nickel mine out of Norseman in WA, and recently took over the Western Area’s nickel mine at Forrestania in the WA Wheatbelt.

It has also taken a 25% interest in the world’s largest spodumene (hard-rock lithium) mine at Greenbushes in southwest WA and partnering in a battery-grade lithium hydroxide plant at Kwinana, south of Perth.

Peter advised ‘IGO has a big exploration portfolio across Australia for these resources.

‘And we don’t plan just to supply the minerals needed for producing renewable energy hardware; we’re also working on electrifying our operations, starting with the Cosmos mine at Leinster.’

Peter’s look back over the last 50 years was fun, but it also laid out in stark detail the rapid increases in co2 emissions during that time.

They were sobering figures, with 2022 emissions into the atmosphere of 419 parts per million.

But you only need to think of a young Peter Bradford singing his heart out in HMS Pinafore to cheer you up.

I wonder, was he Able Seaman Dick Deadeye or lovelorn sailor Ralph Rackstraw?