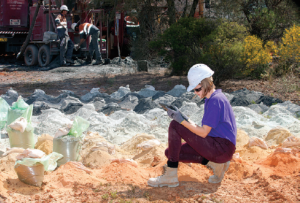 While Excelsior Gold’s managing director David Hamlyn is the first person to admit 2016 has been much harder than expected, he believes 2017 will see Excelsior Gold shine. In late 2015, the company transitioned from gold explorer to gold producer at its flagship Kalgoorlie North gold project, located 45 kilometres north of Kalgoorlie in the heart of Australia’s most prolific gold province. It secured a low capital cost route to production through a long-term ore treatment agreement with Norton Gold Fields to process an initial allocation of up to 2.9 million dry tonnes of ore at a minimum rate of 500,000 tonnes per annum at Norton’s Paddington Mill. Excelsior Gold has also been granted five annual options, each to extend the processing agreement by 12 months, providing a potential total mill allocation of 5.4 million tonnes (Mt). The Kalgoorlie North project covers a strategic and highly mineralised gold province hosting over 80 significant gold occurrences. Within 20 kilometres of the Paddington Mill are mineral resources of 23.93Mt @ 1.74g/t Au for 1,334,800 ounces of contained gold, and probable ore reserves of 23.21Mt @ 2.72g/t Au for 281,800 ounces of gold. Excelsior commenced gold mining at the large Zoroastrian Central open pit mine in February 2016. However, grade issues affected the operation almost immediately after production began, resulting in the company falling short both in gold production forecasts and market expectations. The Zoroastrian gold system hosts total open pit and underground ore reserves of 2.75Mt @ 2.82g/t Au for 250,200 ounces of gold. Mining in the Zoroastrian Central pit has progressed steadily, as high waste volumes have been stripped from the upper levels to provide access to the main mineralised zones extending from vertical depths of 30 metres to the proposed pit base at approximately 130 metres. The mining of the top of the oxidized portion of the ore body has provided insight into the structural controls on the gold mineralisation but below expected ore production.

“The truth is we had some early production setbacks and we didn’t adequately manage market expectations, and we’ve taken our fair whack,” said Mr Hamlyn. “We expect to finish the year strongly and put those issues behind us. By the December quarter, our cash costs will have reduced significantly and we expect to be generating strong positive cash-flow from increased gold production. By the end of the current quarter, the worst will be behind us and we expect a significant turnaround in the December quarter.” At the Zoroastrian mine, the turnaround is expected to come with stripping of the pit overburden to be finalised and more consistent ore beneath the upper weathered oxide zone exposed for mining. Stripping costs, ore to waste ratios, and ore grades are expected to immediately improve – while gold production is expected to reach the targeted production rate of 30 to 40,000 ounces per annum by the end of 2016. Having recently completed a fully underwritten and heavily oversubscribed rights issue and a placement to supportive shareholders, Excelsior is focused on bedding down the mining operations and extending the current six-year mine life. Part of the funds raised will be directed towards a drilling campaign to extend the ore reserves at the Bulletin South gold deposit, which is the next open pit earmarked for development in 2017. The existing ore reserve of 458,000t @ 2.14g/t Au (31,600 ounces) and strong mineralisation intersected below the current planned pit offer potential for significant ore reserves growth at a relatively low cost per ounce. “We have an abundance of advanced gold exploration targets in our portfolio that require funding to bring into production, but we also need to balance those growth needs against the requirement to reward our shareholders,” said Mr Hamlyn. “Our initial setbacks are now behind us and our focus is on reducing costs, increasing production and generating positive cash flow so we can capitalise on the exploration potential of this still relatively underdeveloped region of the Goldfields,” he concluded.