Miner of the month: Draig Resources 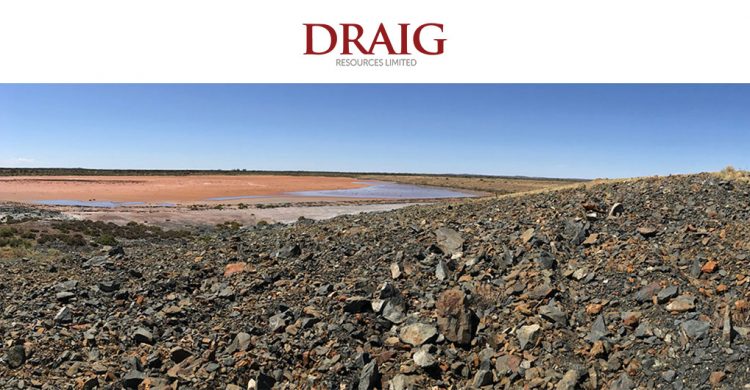 Miner of the month: Draig Resources

In March 2017, Draig appointed Steve Parsons as executive director and charged him with the responsibility of advancing Bellevue.

Parsons came well-qualified for the job, having been managing director of Gryphon Minerals, which under his watch grew to be included on the ASX200 group of companies, eventually being taken over for $100 million by a North American gold company in late 2016.

“After I joined Draig, we spent the first six months looking to find what projects and opportunities were sitting out there waiting to be ‘rediscovered’ – ones that hadn’t been drilled to death and had exploration upside with high-grade mineralisation,” Parsons told The Resources Roadhouse.

“It has only been 12 months since I joined Draig, at which time the company owned just two mining licences covering 20 square kilometres of ground.

“These licences did, however, include the old Bellevue gold mine.”

The Bellevue gold mine stood out as an obvious starting point for the company, having been one of Australia’s highest-grade historical gold mines producing approximately 800,000 ounces of gold at 15 grams per tonne gold before it closed in 1997.

High-grade gold was mined at Bellevue for over 100 years through to 1997 when the operation shut down.

After the mine closure in 1997 it changed hands between some of the industry’s biggest-hitting companies yet very little modern exploration was undertaken as it never fell into their collective portfolio considerations.

This ultimately benefitted Draig Resources, which kicked off the first systematic exploration at Bellevue in the last 20 years.

“The Bellevue project was an amazing standout opportunity,” Parsons said.

“When we first looked at it, we were stunned to find it was a project with almost nothing done on it in 20 years, as it was, after all, one of the highest-grade gold projects of its day and has been sitting there idle.

“We always thought there was a very good chance we would find more high-grade gold – not just more, but a significant amount.

“There’s an old saying in the gold exploration community – one that a lot of people stick by – and it is one that does tend to ring true: if you want to find high-grade gold go to an old high-grade gold mine.”

Draig completed a small program of shallow diamond holes at Bellevue in August 2017 within the high priority Western Mineralised Corridor to gain an understanding of the project’s geology.

Two RC holes from this program confirmed previous historical intersections and provided confidence the company was drilling in the right area.

These holes returned intersections of:

The company started a second phase of targeting drilling in November, and in December announced a new discovery.

The Tribune Lode is a Bellevue parallel structure located immediately to the west of the Highway Fault and about 300m to the west to the historic Bellevue underground mine.

It is in a relatively untested area mostly under the Western Mineralised Corridor shallow transported sand cover.

The Tribune Lode was intersected by drill hole DRRC0024, which returned assays of:

This was followed up by drill hole DRDD0004 collared 80m south of the Tribune discovery drill hole, which returned:

Continued step-out extensional drilling further confirmed the high-grade mineralised system to be extended to the south, at depth and down plunge, with numerous high-grade drill intersections received from the latest round of results.

The company recently completed a fully underwritten institutional placement raising $8 million, which will allow it to carry out an aggressive drill program at the Tribune Lode and explore for further high-grade zones within the highly prospective Western Corridor and beyond.

The placement resulted in new institutional investors enrolling on the company share register as well as strong support from existing shareholders.

“We see a real opportunity to significantly grow the Bellevue gold project into a standout high-grade gold project,” Parsons said.

“We took the approach that it would most likely be a two-year exercise to put some real geological thinking into the project, to bring in new, modern techniques and ideas and then go and test those ideas.

“Then, with pretty much with the first drillhole of our second drill program, we made the Tribune discovery that is in an entirely new parallel structure to what Bellevue sat in.

“So far we have defined it over about 550 metres strike length and since the start of the year the plan has been to drill that out on 80 metres by 40 metres spacings down to about 300 metres vertical depth.

“We expect that will enable us to calculate a maiden Inferred category JORC Resource, which we are hoping to release sometime in the middle of this year.”

Draig will launch into a second phase of exploration activity in the second half of this year that will focus on stepping out on the broader project area and systematically testing the shear Shear Zone that continues for about 20km to the north.

The second half of the year will also afford the company time to start looking at its recently acquired South Yandal project.

The project is only 40km to the east of the Bellevue gold project.

Draig has reviewed historical data at the Yandal project and identified targets for follow up exploration in a highly prospective greenstone belt.

The company intends to return to a first principles approach on the project conducting an extensive regolith and geological review of the project to assist targeting similar to the work leading up to the Tribune Lode discovery.

“Exploration is what we are good at and the company geologists and I wanted to develop a bigger footprint for the company,” Parsons said.

“We were interested in finding a complementary project within a 100 kilometre radius consisting good exploration ground that hadn’t been looked at closely.

“The Yandal project fell into that category and we have now grown our land position to over 1,400 square kilometres.

“It’s great to have a second project and our geologists can’t wait to get stuck into it however as the potential size Tribune starts to unfold the key focus for the company right now is the Bellevue gold project.”