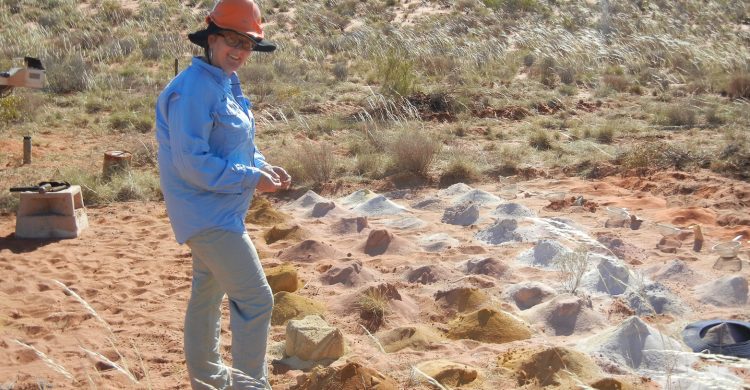 A visit to the abandoned central Bougainville Panguna mine site, where lines of 200-tonne dump trucks remain immobile and burned beyond repair, has stuck in the mind of industry stalwart Lynda Burnett.

The managing director of Sipa Resources Ltd said the experience was surreal and one of the most interesting in her 30-year career.

“After conflict between landowners and insurgents, the Panguna mine closed in 1989 and it was like the land that time forgot,” she said

“Dump trucks loaded with ore were ready to go back to work after a smoko break, except they also had large trees growing out of them.”

Recognising a passion for exploration soon after entering the mining sector, Lynda has spent much time overseas and keeps a pair of work boots permanently in Uganda, where Sipa Resources has been developing the Kitgum Pader Basemetals and Gold Project across 2000 square kilometres of exploration tenements.

It is a long way from her first graduate role as a junior grade control geologist at the Telfer open cut gold mine in WA, where she got a taste of working in open pits at the height of summer.

“While doing open cut mine geology with Telfer, I discovered I really liked exploration and soon took on a role in WA exploring the bedrock for gold under laterite at Boddington” she said.
“It was a big challenge doing greenfields exploration under an operating laterite mine.

“From there, I had exploration roles with Newcrest, Plutonic and Summit Resources and these took me all over Australia and to New Zealand and Chile.”
Lynda then joined the Summit Resources board before working for Newmont and ramping-up her involvement in greenfields business development to become the company’s director of exploration in Australia.

In mid-2013, she became the second managing director of Perth-based gold, base metals and nickel exploration company Sipa Resources, where she specialises in strategic planning, business development, project management and presentation.
This has given her considerable experience working in Archaean and Proterozoic orogenic terrains looking for gold, copper and uranium.

She said greenfields exploration and discovery were in the DNA of Sipa Resources and she was actively working to make the company the ‘go-to’ greenfields project generator and explorer of choice.

“The projects in our portfolio certainly demonstrate our success in this, including being a first-mover in Uganda on a new and previously unrecognised cratonic margin belt,” she said.

“This has strong analogies to the Fraser Range in WA, where the Nova nickel discovery is now a mine and Sipa Resources has a joint venture with Rio Tinto.

“We started work in the Paterson Province in 2016 and quickly demonstrated that this area has potential for large polymetallic mineral systems with our Obelisk discovery.

“We have also pegged a large land holding prospective for MVT zinc deposits on WA’s Barbwire Terrace and area in the Canning Basin, south of the old Cadjebut zinc mine, on the Lennard Shelf.

“The idea is that the basin metals moved south into the Devonian Carbonates on this Terrace in the same way that they moved north to form the Lennard shelf deposits,” she said.

Lynda said the most interesting mining location she had come across was in the Solomon Islands, on the Western Province, where activity – mostly in gold – has been turbulent due to civil strife and land ownership disputes.

Her most influential boss, mentor and friend is Brian Levet, who has worked for many of the mining majors during the past 40 years – including a long career with Newmont Mining Corporation.

“He is – and always was – enthusiastic and passionate about exploration discovery and it was infectious,” she said.

Lynda joined the WA Mining Club six months ago to forge closer links with other diverse and influential stakeholders in the sector.

“The club is full of motivated people who are keen to promote mining in this State and their range of roles and background makes the networking interesting and valuable,” she said.

Outside of industry, if given the chance to entertain three influential people at home, Lynda has nominated Melinda Gates, Trotman (the original explorer in the Paterson), and Ugandan president Yoweri Museveni.

Likely to be discussed over dinner would be her desire for everyone in the world to have access to clean and readily available water and her support for the work of Water for Africa in Uganda and Tanzania.

Lynda said if wasn’t working in mining, she said she would be following her other passion to renovate old stately buildings using dimension stone matched to the quarry of origin. Or you might spot her walking her dog or visiting game parks on holidays.