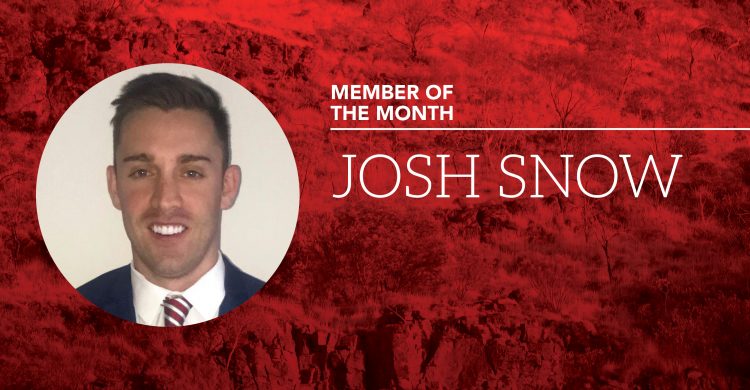 Mining and tourism play a vital role in the economy of the port city of Bunbury in the south west of Western Australia, with the former valued at around $2 billion annually.

The two economic drivers have also played a central role in the life of Young Professional Committee Member Josh Snow.

“Growing up in Bunbury, I have a strong affinity to being by the ocean. Venturing out fishing at any available opportunity. Scuba diving, wakeboarding and surfing also make up a significant amount of my leisure time,” says Snow.

Now involved primarily in the mining and minerals sector himself, Snow was picked up straight out of university by Moore Stephens to work in their Corporate Finance division.

It was a good fit for the UWA graduate who has always had an interest in valuation and investment analysis. He says that the draw of corporate finance is the ability to work on a diverse range of projects in a dynamic atmosphere while incorporating continual problem solving for positive outcomes.

It’s those three principles – diversity, problem-solving and positive outcomes – that led the chartered accountant who is studying law part-time to the WA Mining Club in late 2018 when the club was adding the Young Professionals Group to its mix.

“I wanted to help facilitate a platform for young professionals to engage with the broader resources community,” says the YP committee member.

“By joining the WAMC YP’s, I hoped to create an inclusive and interactive platform to help other young professionals in resources to build their network and join the discussion on important issues that their peers face.”

While many inside the industry have commented on the negative views of mining harboured by millennials, Snow doesn’t think it’s all doom and gloom.

“The push for sustainability is becoming a larger social topic in today’s world, but I also think that the young professionals of today understand the positive impacts that innovation and products of the mining industry have provided – let that be battery minerals utilised in our changing energy landscape or the major infrastructure projects seen around the world,” says Snow.

Outside of the YP group, the Bunbury boy enjoys the networking and technical aspects offered by the Mining Club.

When not working, networking or studying Snow is a “long-suffering” supporter of the Fremantle Dockers, ticking over 15-years of membership this season.

He also plays social basketball and until he started working full time he played Australian Rules at local football clubs in Perth, Bunbury and the Wheatbelt.

“I have travelled to Europe, Japan and various places in South Asia. Travelling and experiencing other cultures is something I really enjoy,” said Snow.