Member of the Month – Andrew Monteiro 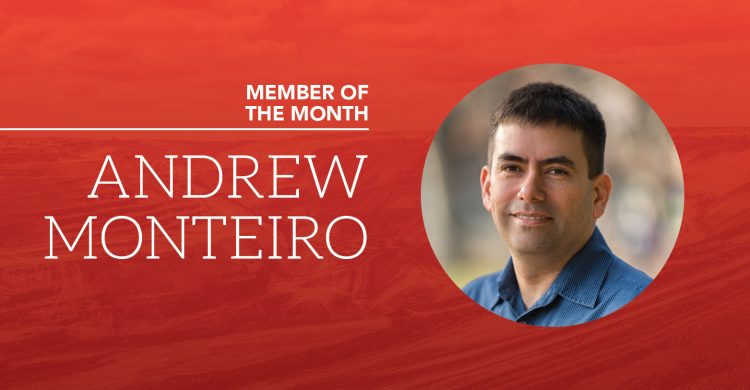 Member of the Month – Andrew Monteiro

Andrew Monteiro started as an IT professional in the 90s but took on the role of IT Network Administrator at Western Metals after being told to get a ‘real’ job with more stability when they were expecting their first child.

Andrew stayed in the mining industry, and this year celebrates 21 years in the sector.

“If I weren’t involved in mining, I would be a less well-rounded having not had the opportunity to work with some great people and visit some interesting places,” he said.

Andrew’s job at Western Metals took him across Australia, working between Perth, Broome, the Leonard Shelf operations east of Fitzroy Crossing, Mt Gordon in Queensland, and the odd trip to Tasmania.

He described the IT manager at Western Metals during his time there as his most memorable boss.

“Not only did he give me my first job in the resources sector, but he also brought me and my company into a couple of other resource companies over subsequent years,” he said.

Andrew established his own IT consulting business, Openet, after leaving Western Metals in 2001, and continues to service clients within the resources sector.

When the COVID-19 pandemic began, Andrew said Openet’s cloud computing platform OpenDesk allowed him to smoothly transition to remote working, saying it was a “trivial process for our OpenDesk clients who were already able to connect to their desktop, applications and data from anywhere”.

Some of the most interesting projects he has been involved in during his time in the sector were the ones that took him to Africa and Papua New Guinea, with Akjoujt in Mauritania the most exotic location.

“I’ve been fortunate to be involved in lots of interesting projects,” Andrew said.

Andrew has been a member of the WA Mining Club for more than 11 years mainly because of the networking opportunities that allow him to meet new people and catch up with those he already knows in the resources sector.

“The presentations are always informative, often insightful,” he said.

Outside work, Andrew’s interests include photography, gardening, bush walking, and learning about technologies old and new.

If he were able to invite any three guests to a dinner party, they would be Nikola Tesla, Albert Facey, and Fred Hollows. Andrew said that if he could change one thing about the world, it would be that “people accept personal responsibility for their own circumstances and for the wellbeing of their community”.